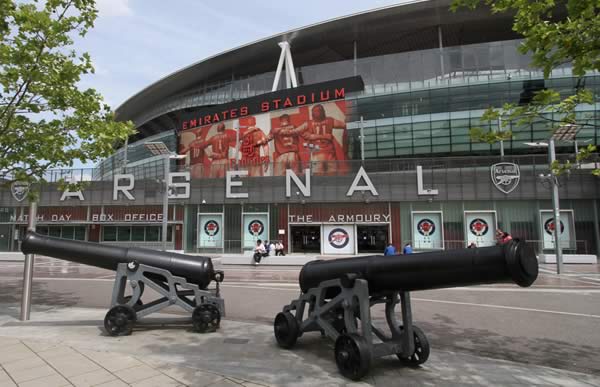 The BBC report that Arsenal have lost a high court fight which would have enabled them to hold more concerts at Emirates Stadium.

At the moment there’s a restriction to three per year which the club wanted to increase to six because of a ‘clear error’ in the planning process.

At the hearing Ken Friar said that the increased income was necessary for the club to be as competitive as possible. However, 0fficials said that if Arsenal could afford to pay £42.5m for Mesut Ozil, they could certainly afford to eat in a moderately priced restaurant.

It now seems as if they’ll have to scrape by on just three and could miss out on a killer shows from the likes of:

Any other Arsenal/football related bands we’ve missed out on? Get your dreadful punnery in below.

They're building a Bendtner
Reply to  Ben knight

vito
Reply to  They're building a Bendtner

Totally offtopic, but good to have you back blogs. 🙂

TURF
Reply to  They're building a Bendtner

Flamini and the sleeves

Mertesacker's Per
Reply to  TURF

Mertesacker's Per
Reply to  TURF

Dirty Sanchez
How could I of missed that one?

We could have Roxette. I’m sure the fans in London will go wild when they take the stage and kick off their set with Joyride. She says: Hello, Giroud. I love you.

Bolox, this mean the Garth Brooks concerts are off??
Jay-Z(impson) is my poor attempt

I feel like a failure for not being able to think of a terrible pun. *Hangs head in shame*

There’s no pleasing you…

^ This one wins out of all the puns seen so far

Hang on a second, you made an article just show off your poorly written music puns. Well played sir, well played.

The return of the corporal...

The Bee Gees. Kieran, and the Ox (they look the same and I am sure could pass as brothers).

or was it Wright Said Wreh?

And obviously: The Wenger Boys

Tom Petit and the Heartbreakers

30 seconds to Overmars
5 seconds of Diaby
In Flaminis