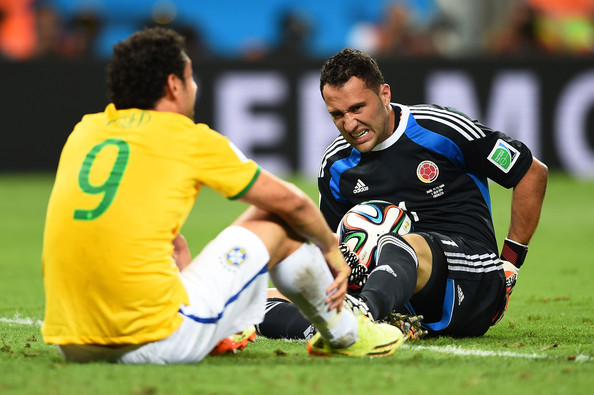 Arsene Wenger wants Colombian international David Ospina to be the man who challenges Wojciech Szczesny for the number one slot, according to the Mirror, Telegraph and Daily Mail.

Ospina, 25, caught the eye as Colombia marched to the quarter-finals of the World Cup keeping two clean sheets in five games before their exit at the hands of hosts Brazil.

Plying his trade in France for Ligue 1 side Nice, for whom he signed in 2008 as a replacement for Hugo Lloris back, he’s under contract for one more year and thought to be available for as little as £3 million.

Arseblog News isn’t overly confident there’s anything concrete to the Ospina link. It looks as though the Metro may have picked up a spurious gossip-column piece from the continental press who in turn have quoted the Metro before the mainstream press have claimed it as there own.

It’s not beyond the realms of possibility, the chap is quite cheap and plays in France (usually music to Arsene’s ears), however, that’s not enough to stop it earning a 7 on the poo-ometer.

The only olivier is Giroud

Casillas is a joke of a link tbf. As for this… time will tell. The way this Summer is going so far I have very little worries we’ll sort out our GK situation.

Almoonia
Reply to  The only olivier is Giroud

I think we should go for David Marshall.
Seems to be an Arsenal fan seeing as he just won that Chisel&Mouse thing

7 poos : that is a huge number for a decent backup. But it could be his agent seeking attention just like balottelli story.

Ospina is good.. At 3m, it’s worth purchasing. Get him arsene!

john terry is a cunt

After a good world cup I doubt ospina will want to be a no.2
9 poo’s for me

Ospina sounds like a Wenger signing. Not that famous, plays in France, cheap.

That joke is fast becoming obsolete.

I’ll never quite know how Fred became a Fucking professional footballer and I didn’t.

Should We Ask Diego Costa??

Not only is he a professional footballer, he is a starting number 9 for bra fucking zil

What the hell happened to Casillas

1 poo for me, as in I’m writing this comment on the toilet. As for the article, yes 7 poos seems accurate enough, infact ill add my own 1 poo too make it 8 poos.

For those asking about Casillas clearly several aliens came down to earth to steal some of the world’s greatest players talents as they are taking part in a inter galactic game.
Hence Casillas, Torres, Fabregas and the entire 2012/2013 Manchester United team, are now shit

The green faced bastards could’ve also taken a swipe at Citeh, Chelski and the Mugmashers so we could’ve won the league!

WTF IS GOING ON!?

Bring back big jens, any Germans do nicely rite now

I’m having a poo too JOhnire, but once I’m done with it I’ll be finished so they can have mine too. So let’s combine Poo’s, two additional poos, to poopoo this idea! What idea?! I’ve forgotten too!!

…Also it’s a shame one can’t spend longer in the loo doing a poo, when ones at work.

The Metro is about as useful a barometer of our transfer dealings as an actual barometer.

Sounds like a lot of poo to me too.

He certainly impressed in the world cup, so 3m does sound like a bargain. Since we already have an established #1, it seems like money well spent. We don’t need a massive GK signing.

Can you believe it Alexis Sanchez is a gunner!

If Ospina brings his brother-in-law with him, that’ll do just fine…

Nice one. That would definitely be brilliant.

Who is his brother-in-law?

Would be happy if we got this guy, if this story isn’t the bullshit it looks like it might be.
Well we do need someone and I’m still not convinced by Damien Martinez.

Ok, I didn’t read the story. Scrolled down to the Poo-ometer and decided it wasn’t worth it.

Good enough for me. International keeper and a good one. Still only 25. 3m quid. I’d say done and dust it. We also need to wrap up LB whether it be Debucchy or someone-else. Plus what many seem to brush under the carpet here in the wake of fantasy signings, we need a Cback particularly if Vermaelen leaves or if he remains unable to force himself into rotation with Meterscielny. We may even need a second but likely Miquel may be given a slot. And despite Sanchez, I still feel we need to insure against a Giroud injury. What depend… Read more »

Usually I’m one to say that 99% of transfer rumours are bollox but have a gut feeling this one will happen. I think Ospina for 4m euros / just over £3m will do nicely. I’d heard before the WC we were keeping tabs on him so there’s been smoke around for a little while. As for why would he come to be a #2 (no reference to the poo-o-meter) – I think he’ll be brought here to challenge for #1 spot. In recent seasons WS has performed best when he’s had competition so will keep him on his toes, raise… Read more »

I am feeling mixed about this one.

On one hand, Wenger is looking for backup for Sczh. Ospina currently has too much ability, profile and too young to be deemed as mere backup. He is coming to the end of his contract and is available on a cheap.

On the other hand the “backups” we have been linked with costs more than double! Marshall and friends etc. British talent costing more than double that of high profile starters.

So IMO, this hangs in the balance.

As he would be no.2 does that count as a bonus poo?