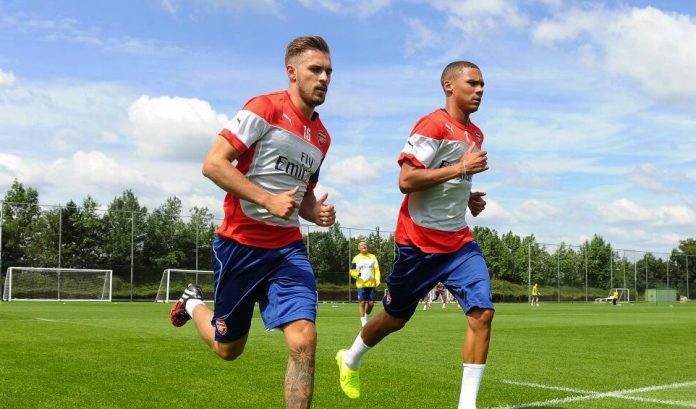 Kieran Gibbs appears to have inherited Bacary Sagna’s number 3 shirt judging by the latest photos from the Arsenal training ground.

Sagna, who recently departed for Manchester City, wore the number throughout his seven year tenure with the Gunners following in the footsteps of Ashley Cole, Igor Stepanovs (who bizarrely held it for the 2000/01 season) and Nigel Winterburn.

Gibbs has worn the 28 shirt for four consecutive seasons but will no doubt see his accession to single digits (assuming it is confirmed) as an important step in consolidating his credentials as the club’s outright first choice left-back ahead of Nacho Monreal.

The number 2 shirt, surrendered last season by Abou Diaby, remains the only other first XI number available and could well be offered to incoming Newcastle right-back Mathieu Debuchy.

Hat tip to the eagled-eyed @RYO_Cleverfish (didn’t even confuse him with the Ox!). Picture courtesy of Arsenal photographer David Price.

This satisfies my OCD.

I disagree with everything you just said…

😀 exactly. Basically, it’s a waste of time doing all this number swapping. Win us the league or UCL and we can start talking about some extracurriculars.

You keep your hands off the little Mozart.

I think the number 16 looks good on Ramsey. I’ve never really thought of numbers as a central part of the players’ quality as much as their actual skills. Also, I want a number 16 Puma Home shirt with Ramsey on the back.

It appears as though ANYTHING looks good on Ramsey….I’m really digging his new look. He was gorgeous before but now…well Giroud doesn’t have shit on our Rambo.

Agreed, but Giroud has shit on just about anybody. That physique!

This coming season the whole Arsenal team will shit on absolutely everybody.

Not until he’s frozen in carbonite anyway. Because Little Mozart literally does not age.

So, basically, make Arteta and Rosicky feel like shit and that they are being fazed out, just to give first 11 numbers to players who are either already playing well in their current number or haven’t yet joined us and it would make no difference anyway? Nahhhhhhhh.

Hope that Gibbs does the “nutty” number 3 proud. I think there was another fairly recent LB that once wore the number, but I can’t recall his name.

Just so long as Sanchez doesn’t take 9 because it’s obviously cursed. When was last striker who did OK wearing that shirt? Fifteeen years ago, twenty?

A few of the more recent examples off the top of my head: Podolski (underused and looks likely to be even more so when Sanchez arrives), Eduardo (destroyed by the manly tactics of Alex McLeish), Reyes (couldn’t tolerate the climate or the Nevilles), Jeffers (possibly the most expensive disaster in our history) . . .

That’s just a tiny sample of jinxed number nines. I think you’d have to go way back in our history – perhaps the late 1980s? – before you find a striker who bucked the trend.

Oddly we’re not the only the ones with this peculiar affliction. There’s a couple of Italian clubs who’ve given up altogether on that particular shirt.

There is no curse, my friend. A man must make his own luck in this world, blessed or not with the fortune of those who guide him. Until he meets his death, upon

Reyes, Eduardo and Poldi have bucked the trend of the cursed number 9s recently.

That Corner vs Chelski..

Good my shirt number OCD will be pleased

These legendary players.
We should retire their numbers like Milan did with Maldini’s number 3.

Speaking of Legendary players, I think the No. 52 (Lucky number ) worn by the legendary lord bendtner should also be rested.

‘Cos everybody will want the number 52. It’s like being the last kid to sign up for a summer league, and the only two shirts left are a small 77 or an extra large 31.

I used to get stressed out as a teenager playing Championship Manager 1993 on the Amiga when it didn’t look like this:

I used to get stressed out as a teenager playing Championship Manager 1993 on the Amiga when it didn’t look like this:

Id be a 4 centre mid kind of guy, a la Vieira

These were pre-Vieira days. I agree with you now though.

Remember Adams always wore 6… so it should have been….

No21 is free too I think? Formerly Fabianski

When and why did Diaby surrender the shirt number?

Before last season, and because he never plays.

he changed back to his old shirt number. (the one he uses most of his career)

I have a thing for the number 23. So much so I was okay with having Arshavin on the back for a time. I wasn’t going to accept Bentdner on last seasons so it was vacant.
Here’s hoping a certain Alexis takes it up this season. Almost like my first name anyway 🙂

I hope he does not. 23 is jinxed now. If Sanchez wears that he’ll end up ambling around aimlessly on the pitch and molesting vehicles off it. That would be a waste of talent and really unreasonable towards the cabbies.

Wouldn’t mind seeing AS in the 23 shirt.
Notice the resemblance of our new away kit. http://youtu.be/ulGCUC9u3QY

Now all we need to do is gently relieve the BFG of the 4 that belongs to the midfield destroyer and bomber-on. Rambo all over it. BFG to don the 5 and TV5 to gracefully accept the 12. Job’s a good ‘un

Actually BFG prefers the number 17, which he donned at his club career and always at national level. Also, I don’t like taking away numbers from players.

No, after his loan spells at Sunderland and Juventus it was changed for some reason.

No, because he’s gone.

Alexis will want 7 or 9 and Tommy will be sound enough to offer, the lovely bastard

Tommy will do no such thing. And rightly so 🙂

In Wenger’s time, 18 has only ever been worn by French CBs – Grimandi, Cygan, Silvestre and Squillaci

Great. All I now got to do is strike off Sagna and put Gibbs’s name on my shirt

Wenger should give Gibbs 3,Debouchy 2 and Sanchez 30.but if Arteta is going,Sanchez should get the number 8 jesey.

Let me be very clear about – Wenger will NOT allow Arteta to leave.

Arteta will not leave! NO! No more talking on this issue

Can you kindly reconstruct That mate? Omo Yoruba!!!

He/she is asking blogs opinion on which number Sanchez should wear. Easy. Woyt = Wot you think

I would hope that either rosicky is generous enough to give 7 to Sanchez, or that Sanchez is OK with leaving it with rosicky for one year and inheriting it next summer.

Big nyoneda n of tradition, great news. In other news, anyone heard of @TheArsenalHorse on Twitter? He says the deal for Sanchez is done and to be announced along with Debuchy.
Confident the deal is done now, but is he reliable?

‘sanchez 23’ would look good to me

…Apologies for the rhyme, I do it all the time

I think you mean Paul Pogba the Abou Diaby knock off.

77 for Sanchez ya heard it here first

Yeah.. 4 is pretty much CM to me ever since Vieira and Cesc. Also, 6 to me will always be Mr Arsenal, aka our commanding presence of a leader at the back.

Surely it’s got to be 30 Sanchez. Sorry, couldn’t resist.

With Sanchez coming in it worries me that Poldi could be leaving us? Keep them all cos we’ll bloody well need them

If we get Sanchez, my guess is that he’ll get the Number 7 shirt (Because Super Tom is a bit old (But still fuckin’ brilliant!) and might not get as much playtime as Alexis will), and with 3 on Gibbs’ back and 2 on Debuchy, my subconscious shirt OCD will be very much satisfied.

So, we finally have full backs with the correct numbers (2: Debuchy, 3: Gibbs).

I am going to assume that Vermaelen is going to be sold, leaving 5 for our incoming defensive midfielder (Bender?), although it would be nice for BFG to give up 4 to the MF and take the 5, but either way.

Sanchez will take 7, I think, leaving Rosicky to take 18?

Other signings – at least 1 new centre back! – can fill in with higher numbers.

Still, my OCD will not stop hounding me….

It seems weird to change a player’s number. Once they get it, it’s like a badge of honour, no? Mind you I’d be happy to receive the number 69, if it was Arsenal’s #69.

4 is for centre-mid. The defensive partner to a more attacking centre-mid (8) in a classical 4-4-2.

Some media outlets are also reporting Remy will join for £8 million. Though they do say that Arsenal and him are negotiating personal terms and they are some way adrift. He would be a decnet squad player. If he joins I expect him to take 18 as this was his number at QPR. We def need a bigger squad with the Germans returning late after the world cup and the French only finishing on Friday. Community Shield only a month away! Id take Sami Khedira too!!

May this appease the football gods

All OCD considerations aside, congratulations to Gibbo on earning a well-deserved single digit number and solidifying his place in the XI. Well done, mate!

Hurray! Gibbs deserves it. I’d love to see Jenkinson get number 2 but I think that will probably go to Debuchy when he’s confirmed.

Since we are on the subject of numbers, I am annoyed the fact Podolski wears #9 when he plays left winger. Give Ozil his old #23 kit, Alexis #9, Podolski #11, and Giroud keeps his #12.

Numbers? championship manager?… Seriously.
Passion for the shirt and DB10 for king that’s all.

I hope Rosicky won’t give up his number has people are suggesting. He is stil big and relevant part of the squad.

It has to be this for me

Ok. As long didn’t affect moral of the squad.

It’s much clearer in this picture (taken off Ramsey’s Facebook Album):

Aaron is looking soooo good. Is he going to stick with the 16 jersey? I mean I guess I see no reason as to why not, he’s obviously a starter for us now, regardless of squad number.

He has kind of established himself with that number so will be a shame to switch. If a better/preferred number becomes available its the player’s choice.

Idk why all of you keep putting Sanchez in your starting XI even though as it stands he is still a Barcelona player. I’m optimistic too and all of that, but when it comes to signings (especially at Arsenal) until both clubs confirm the deal the reality is who knows what the status is.

You keep getting ‘insider’ stories and all that, but with the amount of truth written in transfer stories, I’d probably not even be able to spell ‘transfer’.

You’re a buzzkill, but a smart one; we should wait until it’s announced on Arsenal.com. I knew people who were putting Higuain into their best XI like these ones last season. Debuchy I would think is a certainty, but even that could not be official. I heard Luke Young is available and he would be so much cheaper than anyone’s wildest dreams.