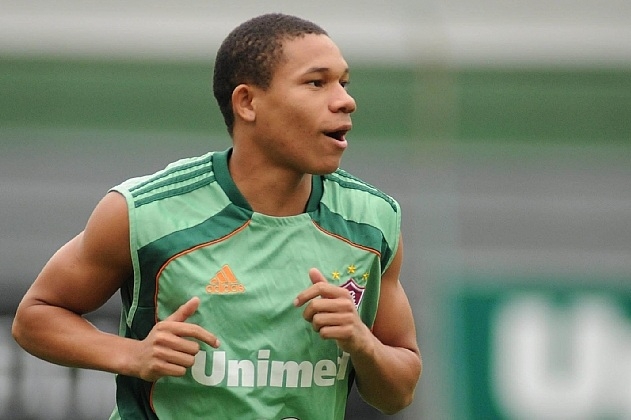 Arsenal’s Brazilian forward Wellington is set to be booted out on loan yet again next season.

Having caught the eye of, and impressed, many at the club in his very early days, the young forward is now getting ready to join his fifth loan club having already had spells at Levante, Alcoyana, Ponferradina and Murcia.

His agent spoke to Sky Sports and said, “A deal has been agreed between Arsenal and Almeria for Wellington Silva to go on loan for the season.

“He had the choice to go to a number of teams in Spain, but Silva has decided to join Almeria. He will fly to Spain next week to complete the paperwork to join Almeria for next season.

“We are hopeful that, after this loan at Almeria, Silva will be able to return to play for Arsenal and they will monitor his progress in Spain next season.”

In truth though, it seems unlikely that he’ll ever make the grade at Arsenal. Despite 38 appearances in the Spanish Segunda last season, he scored just three times and only scored his first goal of the season in April. He’s now 21, not a kid either, so that’s also a factor.

His time at other clubs has been less than successful too, and bar some remarkable improvement and stellar showings for Almeria in the next campaign, his permanent future almost certainly lies elsewhere.

At least he’s good on FIFA

My brother got him up to 89 overall stats. Total beast in FIFA.

And Football Manager 2011. Got him for 300k from Real Madrid, worth £25 million four seasons later. Ah fantasy…

How have we not let go of this guy yet? Feela like he been with us for 10 years already yet has never made an appearence.

Gunner From Another Mother
Reply to  JayArse

Captain's Armband
Reply to  Gunner From Another Mother

If he’s got a contract with the club then they’re obviously reluctant to let him go. Even if they don’t think he can make it with us, he could do well in the lower leagues (UK or wherever), so the option is a) pay him his entire contract salary and let him go to play elsewhere for free or b) hope he shows enough to be wanted by another club and they’ll pay some to get him. We could have just let Vela go but selling him was a nice little earner.

Wellington gets the boot….sorry, that’s awful.

Not every wunderkind can turn into a star. Football is a lot more than just talent, just ask Lampard…if he was judged on footballing talent alone, he would be on the bench of my pub team.

your pub team must be shit hot.

One of those teams that starts in division 5 with a bunch of ex semi-pros, call themselves “Red Lion Galacticos” then whip everyone out of sight 8-0 every Sunday.

“Booted out” was a little disrespectful. Besides that, Arsenal is waiting he made a good season to dell him for a good price, I think. But five loans it’s too much.

No disrespect there by TV5. It was a play on words, using the popular waterproof footwear “Wellington boots”. If your not from the UK, you may have missed that one.

I learnt he’s a good prospect… I hope he hits a bang soon. Besides, I heard John Terry is still a Cunt!

A to the HA
Reply to  TizTeezy

That last part goes without saying.

I love so much that this is the most negative bit of arsenal news out there right now: prospect might not live up to pervious expectations. Best of luck to Wellington, hope he gets his career on track regardless of where it happens.

Was really hoping this guy would get a crack at Arsenal. Who is to say that if he trained with us instead of with some Spanish second division coach and second division players, he could have realised that early promise and potential. Suppose the eternal problems with permits fucked that idea up.

Fuck England and their work permit bullshit!!! I cant seem to recall MU ever having such issues with their foreign players!

i want to boff bendtner and I'm not even gay

things seem to have gone quite on the Campbell front, whats happening to this very good young footballer.ah men.

Hopefully he’s having a holiday after a hard year and a harder WC.

It’s not like the Spanish don’t know how to train promising talent. I hear their National Team has some ok players in it…

Football is so much more than just a neat touch. Look how much effort and mental strength players like Ramsey have. That’s how you know he will be great as he has all the mental attributes to be huge.

Yeah how the fuck did United sign the Da Silva twins? I think they possibly had Portuguese passports. Wellington finally started putting in more mature performances towards the end of last season, the guy has talent and it would be a shame for him not to make it. I know it is unlikely but I hope he does well. It’s last chance saloon for him now.

Zorro in the box
Reply to  Aamir

They have an agreement with a few of the biggest soccer schools in Brazil – they can cherry pick the players they want through out. I suspect there’s a loophole that they exploit when graduating them to Utd.

Would it have been better had Arsenal left this lad to continue his development in Brazil?

From the outside it appears football clubs are reluctant to fulfil their commitment and responsibility and ensure that youngsters are given the best care and development programmes. The failure rate is very high.

The list of clubs Silva has had to move to does not paint a nice picture for the parent club.

Miranda
Reply to  The BearMan

Yes. Tim Vickery said as soon as we signed that it was too early for him to move to Europe. He’s not got the most stable temperament and even before he left Brazil he was prone to bursting into tears. He has the talent but seemingly not the toughness of character to make anything of it. While Arsenal haven’t helped him, it’s hard to see how they could have done better when the work-permit situation meant he had to be loaned out. The problem begins in Brazil itself, though, with kids being specially nurtured for the profitable European market rather… Read more »

Using the term “booted out”, only serves to highlight a lack of care by the patent club.

spinner
Reply to  The BearMan

Again repeating my previous comment. It was a play on words, using the popular waterproof footwear “Wellington boots”. Perhaps Google it?

Anyway, the parent club didn’t even use the term. This is Arseblog News not Arsenal.com

I agree it’s not great for our image plucking a young kid from Brasil then sending him from club to club to get a visa. However in Brasil by now he would be owned by 3/4 shady characters and have no say in his own future. At least with us he is empowered and does have a say in some things, rest is up to him to improve. Maybe the best thing would be, and I hate saying this, get a deal like.. *sicks up* .. Chelsea… *shudder*.. And have a feeder club that produce technically sound youngsters where they… Read more »

Yeah, the Chel$ki-Vitesse example is not a good one. The problem with such arrangements is that the rich parent clubs can buy up most of the talented young players, then farm them out to their feeder clubs, and then have first right of refusal on the player, as opposed to letting smaller clubs own those players. All this will lead to even more distortion in the transfer market, driving the prices of young players skywards. I though Arsenal already had a good relationship with some clubs in the Championship or First Division. It doesn’t seem to be that big a… Read more »

Arsenal tried this move with Beveren over a decade ago.

Madchester Moo – Cows had a similar deal running with Royal Antwerp around the same time (work permit restrictions being a lot more relaxed in Belgian Div. 2 than the UK).

@thebearman, is this your first time reading Arseblog news?
The term “booted out” is a pun cos he’s name is Wellington.

John Terry is a cunt!

Surely a League 1 or Championship English team would be a more productive loan?

if he dont make it at Arsenal he will go on to have a good career somewere and we will get a nice few bob for him if he is sold, Starlets are rare and now and then one comes along, he has had a good education at AFC its the way wenger rolls with his protagies…………Wenger knows best as always…………….

Haven’t heard about this guy in a long time, literally forgot he existed.

I would have prefered a french or holland loan move or even let him be in england. Some players don’t blossom on time, Giroud as an example.There is need not to place so much expactations on our youngstars. I would love to see some of our lads get some game time in our matches this season. I guess the pre season programme will give us the insight of young players that will make the list. I stronly believe they will learn better being around the older players.

It’s a football reality that some players don’t fulfill their initial potential and some player exceed expectations. Players mature physically and mentally at different times. It’s quite often true that some players don’t quite have it ‘between the ears’ to make it at the top level, even if they have the talent. There are tales like Wellington’s at most big clubs. There is no ‘one size fits all’ solutions to this.

is this guy the Brazilian Bendtner?

Who do you want to win the World Cup tonight? Germany or Argentina?

This is like when Chelsea play Spurs – it’s a shame that they both can’t lose!

The Argies will win, though. But it’ll be a boring game.

As usual, you’re wrong. The Germans have won. The team that had three of our own. Given that, why you’d root for the opposition god only knows…much like the reasons why you lament so much about the club you supposedly support.

Can’t really add much to what Yendi said … seriously, have you ever had a positive thought in your life? Crack a smile now and again – it doesn’t hurt.

Fat gooner your spot on.

Meanwhile, CaughtOffside posted an “EXCLUSIVE” saying deal done for Khedira to the arse.