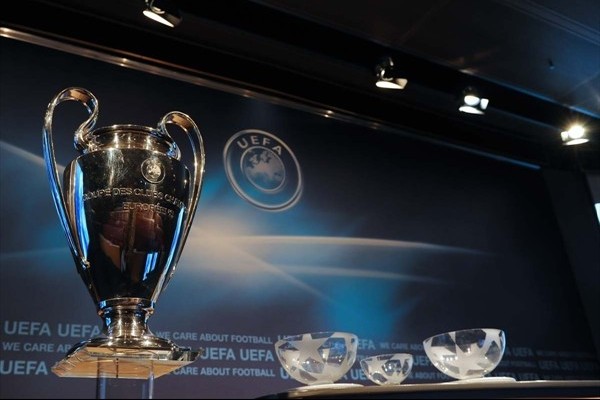 As we know, the 1-0 win over Besiktas last night put us into the group stages of the Champions League for the 17th successive season.

The draw takes place later this afternoon at UEFA HQ when the bald man will say a lot of stuff and there’ll be some video montages and a great European player like Jan Koller will come out and meddle with his balls.

Anyway, Arsenal are seeded in Pot 1, and the rest of the pots are as follows. Obviously we can’t draw any teams from England, who are marked in red.

The groups consist of a team from each one of the pots.

Make your predictions in the comments below. Anyone who gets it right wins a prize*

*Please note: prize is not real. Please allow 28 days for non-delivery of the prize.

Lol in yer dreams. Me predicts that we will thus face-

The amount of ridiculous puns we would face with them three…

People are thumbing this down?????? It must be the fall…

If anyone should return, it should be Dennis and Ajax!

It’s Arsenal we’re talking about, so my prediction would be Arsenal, Paris Saint-Germain, Athletic Bilbao and Roma. You can count on Chelsea getting Basel, Olympiakos and BATE Borisov!
Seriously though, I hope for the first time in a while, we get a relatively easy group and top the group. Every single time we’ve finished second, we’ve faced a tough team, second game away…

Well, Basel beat them twice last year, so I’d like to see that again (I’m Swiss and even though I dislike Basel, I dislike the rich club even more)

I’d love to have Schalke, Bilbao and Anderlecht to minimize travel disctractions.

Basel bat Chelsea because of Salah. that’s the only reason they bought him

Still, I wouldn’t mind a tough group to be honest. We can beat any team from pot 2-4, and last season’s group matches were amazing, especially the win at Dortmund and the thrashing of Napoli at home.

I’d prefer an easy group, but I’ll take a couple of magical Champions League nights down at the pub.

Oh, and as a Norwegian gooner, I wouldn’t mind taking a trip across the border to play Malmö!

I honestly look at all of those teams and think there arent really any easy games.
Just some slightly less tough than others.
Besides possibly Ludograts.

After Ludo’s fairy tale win yesterday (a defender in goal saves 2 pens and scores his own!) I can’t root against them. Good on you, Bulgarians.

Replace Olympiakos with Galatasaray. The group of death. Of all Gooners.

Typical group: Marseille, Olympiakos and Porto. And then Barcelona in the last 16. Every fucking time.

Bonus: replace Barcelona with Bayern or the “flavour-of-the-moment”-team

So Real Madrid this time around

I would prefer to stay well clear of Leverkusen this year. Roger Schmidt their new manager has put a spring in their step and they are not to be underestimated.

Do you really want to go to Ukraine now?

Shakhtar won’t be playing their games in Donetsk.

Who we will probably get: Paris Saint-Germain, Athletic Bilbao, Monaco,

Just realised PSG and Monaco can’t be drawn together is Roma instead.

Arsenal , schalke , Ajax and Roma, ….. That would be an interesting group

How many times have we won the pot 1 trophy?

Quite fancy an away day in Amsterdam this season.

Quite fancy seeing Bergkamp at The Emirates too!

I’m suing if my prize is delivered within 28 days.

Arsenal, Juventus, Bilbao, Monaco .. can’t get more difficult than that

I think I’d like to go to watch us play in Basel, Amsterdam and Cyprus… Holiday time!

Arsenal – schalke – Athletic bilbao – Roma
I am extremely proud of the fighting spirit the boys showed.Well done to all of them.Well done AW.They have to continue giving 100% in all games starting from the first minute not the last 10 minutes.come on you gunersssssssssssssss

Would like Basel, Bate, &Bilbao (coz I live in Spain & could drive there). As for the other2 should be relatively easy.COYG

arsenal,borrusia dortmund,galatasaray,as monaco!!!! as easy as it comes since we are arsenal

Arsenal, PSG, Leverkusun, Roma. Seems to be the worst possible.

Seeing that we’re unlucky with draws (drew Southampton in CoC) I’m expecting Arsenal to be in the Group of Death.

What’s the story if we get drawn with Shakhtar Donetsk? Neutral venue for away tie?

Hope we get Dortmund, Lisbon, and Monaco. Then Arsene won’t hesitate in buying Reus, Carvalho and Falcao to give us just a little bit of advantage over them.

Made a graphic looking at how tough our draw could possibly get. http://t.co/r9FkOYZfhs

We will get out of any group I think, we normally do. It’s about time we had a bit of luck.

I’d love to see Malmö in the same group. Would be awesome for us Scandinavian Gooners!

Plus, you know, we would destroy them 😉

Anything but a trip to Russia.

Well its Aresenal and UEFA will fuck us over in the worst way possible. They will bend all rules and give is Real Madrid, Bayern Munich and Barcalona.

Oi! I used to love Jan Koller. Rosicky and Koller together at BVB was just brilliant!

PSG, Sporting, Roma. The first two to screw up our transfer business and the last just to make things more difficult.