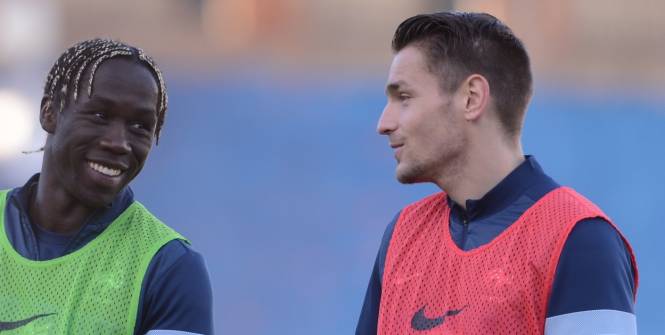 Mathieu Debuchy admits Bacary Sagna is a hard act to follow as he looks to make his mark at Arsenal following his compatriot’s departure for Manchester City after seven years at the Emirates.

The summer signing from Newcastle has enjoyed a steady start to life in North London starting all five competitive games this season as well as picking up a medal in the Community Shield as the Gunners ran out 3-0 victors over his predecessor’s new side.

Ahead of another meeting with the reigning Premier League champions Debuchy spoke about his relationship with Sagna, explaining that their long-standing tussle for a place in Didier Deschamps’ Les Bleus squad has brought them closer together.

“Bacary is a good friend of mine, we have been in touch for many years now as we have been playing together in the national French team,” Debuchy told Arsenal.com.

“I’ve known him for a long time, in spite of the competition we have a very good relationship, everything is cool between us. It hasn’t been easy to replace Bacary because he performed very well here. Our games are quite similar and to take over from him is not going to be easy, but I am going to give my best to the club.”

It’s not yet clear whether Sagna will line up for City at the Emirates on Saturday afternoon, but either way, Jack Wilshere says he’s looking forward to a reunion with the former fan favourite.

“He was a close mate,” Wilshere told Arseblog News yesterday at the BGC Charity Day.

“He was with me as long as I have been at the club, which is 16 years. He always put an arm around me and was really influential when I was coming through as a kid. I’m looking forward to seeing him.”

In other news Theo Walcott is looking forward to making his Arsenal return so he can help Mesut Ozil demonstrate his full potential.

The England winger is three weeks away from full fitness after sustaining an ACL injury in early January and believes his pace, combined with that of new boys Alexis Sanchez and Danny Welbeck, can help the World Cup winner replicate the form he demonstrated at Real Madrid.

“When [Mesut] was at Real Madrid and he had Di Maria, Ronaldo and Benzema, three very pacy guys, the number of assists he got was absolutely key,” he told Arsenal Player.

“It’s a massive season for him personally and I think the likes of us guys will help him tremendously. There’s a lot of pacy guys in this team now and we’re thinking that’s what we might have lacked last year, especially when I got injured – there weren’t as many players to get in behind [defences]. Defenders then double up on you, which creates space for other people.

“You have us bombing on and then you have the likes of Aaron, Jack, Mesut and Rosicky, who can all spot a pass, so that’s only going to help the team. We’ll be very dangerous on the counter-attack.

“It’s very exciting for Arsenal fans to see. I think it will maybe bring back the years where we were so successful. It’s all about pace now and that’s what you need in a team and we have bags and bags of that.”

such a shame that Na$ri decided to retire from international football, would love to know what our new RB makes of Samir

Monkey Nuts
Reply to  the only sam is nelson

I thought his decision to retire was made for him because he behaved like a cock and was never going to get picked. There are probably 20 better French players that play in his position anyway. Chinless little waste of space.

Ralph77
Reply to  the only sam is nelson

I’m really looking forward to hearing the boos whenever Le Cunt touches the ball. What a lovely serenade that is.

Similarly, perhaps we could bring DENCH back for just tomorrow’s match, and place him pitch-side will the sole job of staring down Na$ri until he leaves the grounds; Frim never says a word, never blinks, just laser eyes locked on letting Na$ him know, “I’m watching you.”

agree with Walcott – just flashback to ozils debut – he had Walcott as a runner and threaded two lovely balls to him which were goals.

I think the pace will bring the best out of him – however, in my opinion he needs to play centrally to do this. although he drifts around the field from the left – having him more central drifting will be beneficial IMO.

Özil’s assist in his first game was for Giroud though?

Should have been goals…but Theo fluffed his lines. A few times that day if I remember correctly.

*agreed – I put goals since he HAS TO FINISH THEM!

I hope every player clicks tomorrow and play the arsenal way..extremely exited for tomorrow..have been all week..come on you gunners..nth less than win..heal my heart !!!!!

Surely he means since he was a 16year old right.

Looking forward to having Welbeck, Walcott and Sanchez all starting in the front 3 eventually, the pace will be incredible.

Agree, Sanga first played at the Emirates Cup the season that the new stadium opened. I was at his first game for the Gunners and Sagna impressed. He looked as if he had been playing with the team for seasons. He never let us down gave his all. Debuchy has done well so far, nonetheless.

Yes, Sagna was ace but Debuchy has done fine so far. Tuesday without him is a bit of a worry. Bellerin or Chambers? Bellerin’s pace would be exciting and he looked terrific in the under-21s, but he’s barely played in the first team let alone against serious opposition; nor has Chambers, come to that, not at right back. Maybe Wenger won’t risk either of them and will use Flam instead? We need to win on Tuesday if we’re to be sure of topping the group. Though a draw in theory wouldn’t be disastrous, given our usual injury problems as the… Read more »

I feel the need, the need for speed.

The season we sell Jack to a Prem team is the season i’ll fall out of love with football.

Im confident we’ll get at least a point tomorrow, hopefully we’ll get all 3 🙂

A Welbeck hatrick with Debuchy nutmeging Nasri evrytime in the build-up tomorrow?

And Im cool with Debuchy being our spanking new right back. Has looked very impressive so far. Better going forward than Sagna and defensively very solid as well!

Just a little overeager in the tackle sometimes. But the enthusiasm and commitment is reminiscent of Bac’s. That said, Sagna did leave for money and easier trophies. Not that I’ll boo him or whatever.

Hot damn I’m excited for tomorrow! Bring the pace and bring the pain!

A Poldi-assisted, Nasri own goal.

I really want it to be an own goal. The shot was heading to the corner flag until…

And then after the own goal, Na$ri is red carded for being such an insufferable cunt.

Focus has to be on 3 points- clicking comes second

I hope we start welbeck upfront tomorrow, sanchez to the right, ozil in the center and probably Podolski on the left. It’s not wise to expose our left back against a marauding zabaletta.

Case for Podolski to start: His excellent game and assist vs mancity in this fixture last season

“I know he is going to perform well there, good luck to him, except on Saturday!”

Love this guy already, he always gives 100% and is ice-cold in the challenges, great work rate defensive and offensive…does he already have a nick-name?

I’d go for Debuchy De Butcher…nice one! He’ll butcher everyone who tries to pass! thx

Debuchy is such a LAD

I really hope we punish Oil City tomorrow and expunge the demons of the top 4 clashes from last year! A replication of our performance against them in the Community Shield is a decent reference point but with Welbeck up front I think we will do well. Shackle their midfield and take our game to them, no time for handbrakes! Interlull well and truly done after our win tomorrow I can finally have a fap! COYG!

But do they have a good relationship? That’s the unanswered question.

Who cares what their relationship looks like… As long as Debuchy is fit and keep on playing while Sagna keep on mopping city’s bench and we take all the 3points that will make my day….COYG

When I saw that Theo was in this article, I let out a squeal of happiness.

Anyway, I think that its high time Arsenal stops being a club that is a platform to showcase your skills, then go win trophies elsewhere. We need to win the league and the Champions League, or at least get to another final. We have to become a serious contender, so that we can be taken seriously. I’m tired of people kissing the badge and then fucking off.

JACK IS A GOONER

Tenzo (Theo's secret lover.)
Reply to  JACK IS A GOONER

He broke the 10m record. Hector Bellerin broke the 40m one.

I can feel it. Bring it. €ity wont know whats hit em. Lets all do the poznan lalalala….. COME ON YOU RIP ROARING REDDDDDSSS!!!!

Wilshere said of Sagna “he was with me as long as i’ve been at the club, which is 16 years”.
Is that right? Was Sagna with us that long?

Nah Sagna was only with us for 7. I think Jack was trying to say that Sagna had been at the club since Jack first got there, when he was 16. I think.

There is a reason why Debuchy has replaced Sagna at RB for France.

Podolski is there for power when need be.

Ha ha except on saturday i lv this coyg

Very interesting interview with Wilshere on arsenal.com:
http://www.arsenal.com/news/news-archive/20140912/jack-you-have-to-handle-the-scrutiny
Jack is sounding very mature these days. And full of pashun, as always 😀

Going through a messy break up right now. I desperately need the win tomorrow to live on for now. It’ll be too much otherwise. COYGs.

In NIgeria we call him DOROBUCHY

We all know tomorrow is going to tell us a lot about the team. I am already getting butterflies. A draw will be tolerable but we really need a win here. Hoping to see Weibeck up front in the middle and see him score two. Can’t believe how much of a wreck I am already. Still have over 12 hours to go. A repeat of the Community Shield score would be great.

I agree with some of you other guys here.
Poldi will score the winning goal as a sub tomorrow….hopefully it takes a rebound of $amir$ nose…

ohhh that beauty of goal by sanchezz !! only if that goals was on the 90 minute

2-2, ok at least we got our self esteem back

Why no match report? This is not what I pay for! Oh…