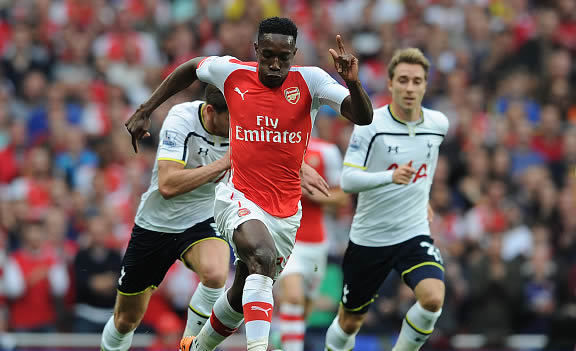 Danny Welbeck says he’s unhappy that the team dropped points in the North London derby, and said the Gunners should have done more with the possession and chances they had.

The striker told Arsenal Player, “It could have been better. We really controlled the game, we had a lot more chances and they got one shot in the second half and it went in so we’re a bit disappointed with that. It’s disappointing to draw the game.

“I know what it means to the fans and the whole club. I really wanted to get the three points so I’m a bit unhappy.”

Welbeck also bemoaned the first half injuries which robbed the team of changes which could have had more of an impact as the game went on.

“It is difficult because we set out as a team knowing what we wanted to do and with the injuries coming into play, it changed everything for us and made it difficult. We would have preferred to make those substitutions later on in the game.”

His thoughts were backed up by Arsene Wenger who admitted he’d have liked to introduce more attacking players in the second period.

Having had to make two enforced changes, the manager said, “It restricted the options to put strikers on.

“I only had one position left. If we could have brought Rosicky and Podolski on in the final 30 minutes, it would certainly have made a difference.”

C’mon guys, heard all this too may times now.

Back up this talk with our coming games on Wed and against Chelski later.

We will be out there screaming our guts out, supporting you … don’t let us down anymore!

Love the way he says Arsenal … kinda New York’ish knowing full well he is a manc. Now if only he could get a little roofless in front of goal. Forget about it!!

Agree with welbeck, we definitely dropped points!!! Hate being negative but last season we beat all the promoted sides hone and away, we also beat the spuds… this season we dropped points at Leicester and now against spuds… the only game that has been an improvement was getting a point v Everton… so gained one point but dropped four!!! It is early days but I suspect the league title will be out of our reach when really it shouldn’t!!!

and beat everton at home we will get 4 again the only problem is getting points away from the top 4 I think that it’s our only chance to win the title.

Please do good against chelsea, really can’t stand that team.

“If we could have brought Rosicky and Podolski on in the final 30 minutes, it would certainly have made a difference.”

I’m sure some of you can relate.. I try to approach everything in life being the very best so it hurts when my team that I believe I share an affinity with can’t or won’t match that ambition. I often refuse to succumb to the acceptance that we are not strong or smart enough to win the league but it’s true, the first step in solving a problem is understanding there is one, we aren’t a bad team, we’re a good one.. Just not good enough.

I don’t think anyone is denying that our squad is behind City and Chelsea’s team, bought with oil, gas, and mafia money. Logic says they should win the league. Our squad is much weaker than we would like to admit. But as a whole, and with Wenger’s guidance, the team is better than the sum of individuals. Wenger is one of the best managers out there, but why he always makes things tough for himself is beyond me. You know, like playing players out of position, fielding cash reserves, the usual stuff.

Not even trying to be rude but I can’t grasp your point. They have investors who pump money into their club and we have investors who do likewise, difference is I’ve seen Abromovich and the Man city owner at their games where as we can’t say the same for Stany boy. The notion that they have more money than us somewhat waters down their credentials as a football club would apply to us also in reference to smaller teams, besides Arsenal aren’t the most ethical team in the land either with the highest ticket prices in the land without a… Read more »

It’s not the amount of money they spend (kinda, although that is part of it), it’s the amount of risk they can take with larger sums of money that separates us. When a club can spend 20/25m on a player, give him high wages and then if he doesn’t woprk out, or even play that much they can just shrug and move on with the next one. We can’t absorb that kind of loss. We spent 35m on Sanchez, a player who has performed at the highest level and just coming into his peak with everyone lauding his attitude, and… Read more »

Danny I agree with you and I know you are trying hard as are the rest of the team , yes we were unlucky with our injuiries, but that could happen to either side . All I would say is thank god the Ox was behind you to score. This is not a critism as I have already said you work hard ( perhaps to hard and miss some chances that with a bit of calmness you may have scored) please keep up the energy levels as we are going to need them on Wed and Sat. On the injuires… Read more »

Bob A”Danny i agree with you” huh ? Wadya think this comment section is ur private chat with Welbeck

Bob A
Reply to  The Silent one

Podilski would have made a difference?? What is Arsene Wenger smoking?

Well, he may not work a great deal, but given how fluffy our corners tend to be, I wouldn’t mind seeing him take a few of those with a little power. Most of our current corners are so weak they’re essentially just a pass to the goal keeper or nearest defender. You’d think someone would realize that packing a punch is required.

@UnByeUsGoner – We will never smash 5 or 6 past one of the big boys bcos the big boys set themselves up for the big games in a way that ensures they will NEVER concede 5 or 6. See how €ity played against bayern. Then you see the suicidal things we do like when we’re leading against €ity and people are out of position, standing together chatting etc when our keeper has the ball. You have to go into these games determine not to give the opposition anything and determined to fight hard for the full 90. If we do… Read more »

Big Boys. It’s not like these clubs have not had their shock results as well where frankly, their defense would also be culpable. We can certainly cut down such mistakes and be more water tight but these things do happen. Where we can improve and make the difference IMO is in attack. We need to take our chances better. We created a lot but we were almost as if we were too shy to finish them properly. a lot of our shots were tentative and without sufficient conviction/power. Had we put more belief through just one of those shots, we… Read more »

He needs to start thinking of playing like Henry.

Hopefully we won’t be trashed at the bridge. I hate to admit it, but Chelsea are freakishly strong.