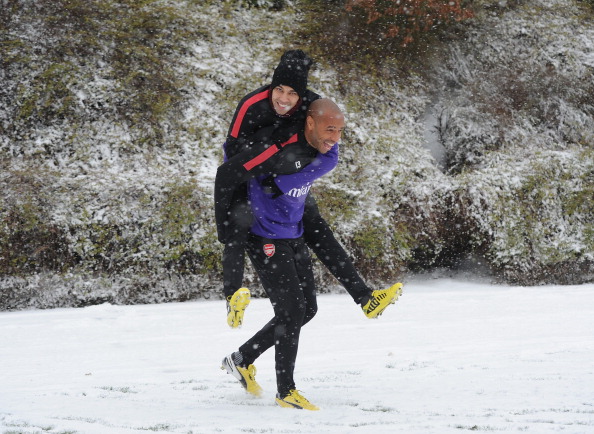 Andre Santos is set to join forces with Robert Pires in the Indian Super League after the Brazilian left-back signed for the Frenchman’s new side, FC Goa.

Santos, 31, left the Emirates on a permanent basis in 2013 after a roller coaster couple of years that saw him better remembered for a speeding fine than anything approaching consistent defending.

Signed as part of the fabled post-United 8-2 hammering spending spree of August deadline day 2011, he was initially viewed as a popular figure with his rotundity making him just a bit too cuddly to dislike and because he scored in the 5-3 win against Chelsea.

After an ill-advised half time shirt swap with Old Trafford’s Dutch Skunk the terrace good favour seemed to desert the samba star as quickly as his form and a lengthy spell on the sidelines preceded a loan move to Gremio. The return home appeared to do Santos some good, he even won back a place in the Brazilian national team, only for a decisive penalty miss in the Campeanato Gaucho Cup semi-final to further knock his confidence.

In July last year Santos earned a permanent move to Flamengo on a two-year contract, but again it didn’t go well. Left in hospital after an attack by his own fans following a poor performance in a 4-0 defeat to Internacional he had his contract terminated in August by mutual consent and has since been a free agent.

It’s not known if ‘swoontastic’ Pires recommended Santos to his new club – managed by Zico – although the 40-year-old ‘Invincible’ did train with the player during regular returns to London Colney.

It’ll be interesting to see how the pair get on together ahead of FC Goa’s first ever competitive fixture; they play Mikael Silvestre’s Chennaiyin FC at the Jawaharlal Nehru stadium in Fatorda, Margao, on 15 October. Arseblog News will be keeping its fingers crossed for a tweet of ‘verry good win gays’ proportions.

All Singing All Dancing Crap of Arsenal

Goa is the best city in our country. You people should come

All Singing All Dancing Crap of Arsenal

Although I myself am not from there

Just wanna thank ArseBlog for keeping us up to date with all things Arsenal.

I was abroad when we signed him, Park, Meet and Arteta. Twas a suprise..

Parisian Weetabix
Reply to  the only sam is nelson

You delved to uncertain depths to make that pun and emerged triumphant.

gombakhillbillies
Reply to  the only sam is nelson

I like barging a pole up a Portugese colon, but I don’t think India was ever a Portuguese colony.

Erm, Goa was in control of the Portuguese for a considerable period of time.

We’ve been a colony of pretty much every country at one point or another.

Oh my God, it feels SO good to see the name of my city (Pune) onmy favourite website! Thank you Arseblog News! That said, I’m still buying a Pires and a Ljungberg shirt despite them not being in FC Pune City.

Welcome to India, Nice to meet you.
Go Kerala Blasters!

Brilliant Mr. Blogs. Although, I thought you would’ve covered this because of Pires…

Pires and Santos combining on the left wing. Who would’ve thought…

Arseblog- thank you for publishing this. Can’t be happier!!

Santos? Never heard of her!

🙂 good see an India related new on Arseblog. Really excited for ISL. I hope it generates some love for football in my cricket fanatic country.

Ohh man!!! Never did i imagine to be seeing Pires and Freddie in action first hand. Watching them play is going to be the best thing that’ll ever happen to me in my Gooner career.

maybe we all Indian Arseblog Readers can meet up at these games, and after drooling over Pires/Freddie etc can discuss more things Arsenal

Kerala man working in Delhi. Gooner for over 10 years now and a regular reader of Arseblog for about a year. Exciting times ahead for India football. 🙂

I read your blog regularly and it feels great that you’re keeping an eye on the upcoming league in India. I’m from India, feel great that you mentioned the Indian league on Arseblog. Now I can relate to Arseblog even more.

Awesome that ISL gets mention on ISL.though I am a sad that Kolkata doesn’t have ex Arsenal players

also with Freddie playing for Mumbai FC .. it will be easier to watch him

just need to block the dates

good initiative but footie infrastructure needs to improve in many places in India, maybe this will help.

Goa+ Pires is an awesome combination.

WOW, the ISL is like a dreamy flashback of football legends of the late 90’s and early noughties. Might just move there to feel like I’m a teenager again. Does anyone know what the international broadcasting of these games might be?

just laying the foundation for the whole Arsenal team to arrive in India in the coming years.

Dont want to be a party pooper but the ISL is going to be just another Indian Premier League (cricket) kind of crass shenanigans with barely any development of footy at the grassroots level (where we actually need it). Will be shitty coloured jerseys and a bunch of money thrown around by Indian corporates and Bollywood actors looking for the next fad. Having said that, any publicity i guess is good publicity. From an Arsenal perspective, in about 10 years time, India is probably going to be a big market (for both talent and cash!). A lot of plastics but… Read more »

Oops. Didn’t complete that one sentence about plastic fans but now i cant be arsed to.