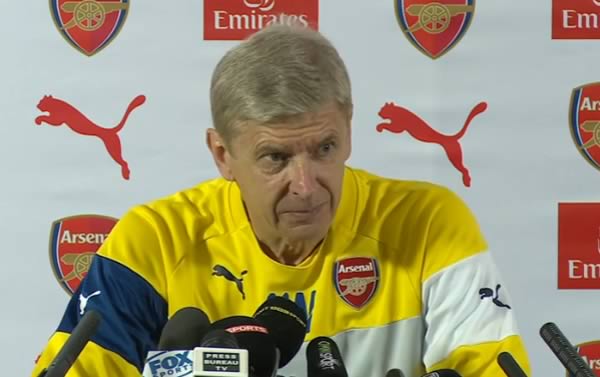 Arsene Wenger admits the first North London derby marks an ‘important’ moment in the season as the Gunners look to build momentum after last weekend’s victory over Aston Villa.

Unbeaten in the Premier League since April – a run of 10 games – the boss claimed that beating Sp*rs will mark a good foundation on which to mount a title challenge.

“It’s an important moment of the season and it has a meaning for everybody,” Wenger told assembled media at his weekly press conference.

“Above all it’s an opportunity for us to take points in the Premier League where every point counts. It looks again this season that every point is difficult to make. Of course we play a home game and we want to win our home games.

“Are they defining points [on Saturday]? I don’t know, but Tottenham has over the years had good players and a good team. To be on top of them of course means that you can fight for the top of the league.”

Tomorrow’s clash marks Arsene’s 44th against Sp*rs over the course of his 18 years at the club. He’s lost only 6 – a record that speaks volumes.

For three Arsenal players, tomorrow’s clash will mark their first taste of the rivalry. Alexis Sanchez, Danny Welbeck and Calum Chambers are all set to start with the latter facing his former manager in the same week he renewed ties with old club Southampton.

Handed his debut at St. Mary’s by new Sp*rs manager Mauricio Pochettino, the Argentine admits he’s been impressed by the the versatile defender’s subsequent progress at both domestic and international level.

“Calum is a great personality and he has great talent,” he said. “He deserves his moment now because one year ago, at the start of pre-season at Southampton, he was playing in the development squad. Step by step, he won his place in the first-team. It is not only because he has talent but also because he has great character.”

Thrown in the deep end at the Emirates following his £12 million move, Arsene Wenger reflected that his latest protégé appears to be coping with the demands of playing weekly for a big club.

“I don’t know [how he feels] because he played against Southampton and after he plays against his former manager. The only thing I can say is that he looks like he’s dealing well with the pressure.

“For us he has straight away become a regular player. For a 19-year-old boy that’s very demanding in a club where the requests are very high but he absorbs the game very well, not only physically but as well he deals very well with the huge pressure that is on him for such a big game.

“[The yellow cards worry me] a little bit because he has three yellows and after five you miss a game. But that’s down to the fact that he’s committed and lacks sometimes experience in the challenge.”

My hair is better than his

Hat-trick for Chambers. Always in our shadow

Oh when the Sp*rs go marching down!

So its that time again, the good old NLD.. Even though Sp*rs do look in abysmal form, its still not a match the players can take lightly. The NLD is a strange fixture, it doesn’t really have any bearing on current form of either side, its all about the 90 minutes on the day. I see tomorrow as the perfect opportunity for our players tooo give them a solid panning, and show them how we have really progressed and how they’ve gone backwards. And to just remind our deluded next door neighbours, that they are nothing more then a bunch… Read more »

But two or three times a season (mostly because Sp*rs fans are so delusional) we’re obliged to prove it.

oh god…im still suprise they call this game.is a rivalry….im more concern playing against Birmingham than the spurs.

Oh..lets be nice to our neighbours and tell them what we think. Another 2-0 nil win for Arsenal while they totter back to their hole in ‘white hart lane’ to contemplate the existence of the miserable little bunch of players they call a team.

Was Born a Gooner

Arsenal 3-0 Spuds
.
Scrorers: Gunners
MOTM: Gunner
Flop of the match: Danny Rose…
Letz remind him again that he’s not a footballer, like the Mozart did last season…
#COYG!
Welbeck to score again
Ozil to assist… and score again!

Behind Costa (groan), he’s been the best signing of the summer for any club. Remarkable for his age. Please remember that when he, inevitably, makes a mistake.

I liked the bit Wenger said on the match being a pleasure and playing at the top level was enjoyment. I remember Özil saying something very similar on his first visit to Old Trafford last season. I can imagine how different Wenger must have seen to him when compared to Morinho. He probably never muttered the words pleasure or fun when managing Özil in Madrid.

Arsenal are the favourites to win this one though the NLD has no respect for form.
I see a high tempo game as usual but if we score first and early, then that should be that. Spurs are not the most confident of sides at the moment.
Sanchez, Ozil, Ramsey, Ox, Carzola and Welbeck may just prove too hot for them to handle.
I am cautiously confident.

Yeh I agree, if we could nick an early goal, I think we could absolutely bury them.

Here’s hoping Ozil has an absolute stormer so we can remind them c*nts of what they lost to our gain! COYG!

I can’t help but be nervous before these matches. Will be singing my heart out, urging us on. Maybe Kos can get a winner; we’d be bound by all that is sacred finally to give him a song.

Next two weeks are big. Beat Spurs and then move to Chelsea game. We can really send a message to the league because at this time no one is giving us much of a chance for the title. Two wins or a win and a draw may change all that. Really annoying that broadcasters have so little respect for us. Love to shove it in their faces.I guarantee none of them believes we will beat Chelsea. at their home. Perfect time to do it.

I actually think not being marked out as favorites will work in our favour. Less pressure, less attention from the media hounds and we can slowly and quietly work our way to the top. Last season not many quarters gave us a chance either but we led the league for long periods.

Ozil in the middle again please!

Step by step Chambers will become a top, top, top quality player! …he won’t got nothing to fuck with!

Here’s hoping for another excellent performance from Özil… and what a vital purchase Chambers has turned out to be, to think people said he would be wasted money after buying Debuchy too!

“the boss claimed that beating Sp*rs will mark a good foundation on which to mount a title challenge.”

Since when do we need a reason to beat Spurs?

Chambers has been fantastic. He is so calm on the ball. Also thought Coquelin actually did well against Southampton. He adds a bit of depth for us in case Monreal has to be CBack. Bellerin as Clarke mentioned was suspect in positioning at times but his recovery speed is amazing and covers some of these temporary deficiency. Hayden also did well and should be the better for the experience. Shame about us being out of the competition. I could not care less for the cup but it would have been useful for the younger and reverse players to have had… Read more »

I know you lot hate a show off or i told you so. But ive been doing NLDs home and alot of aways in the early days for nearly 40yrs. Let me tell you NOTHING compares. Theres something in the air. COME ON YOU RIP ROARING REDDDDSSS. What do we think of tottingham???

Be sure to come back here and tell us about your day.
it’s always good hearing first hand reports

Chill, I got this.

When Arsenal beat Spores away in 1971 to win the league the turnstiles were closed when I got to the ground so my two mates and I climbed into the stadium. Easy when you’re 15!