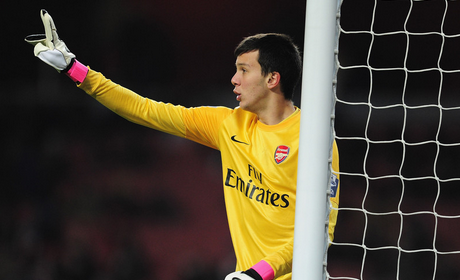 The signing of David Ospina may serve to increase the pressure on Wojciech Szczesny to maintain his status as Arsenal’s first-choice goalkeeper, but, beyond first-team level, there is also an engaging battle taking place between the club’s young shot-stoppers.

Damian Martinez earned a merited promotion to the senior squad in the summer, having developed well during his loan spell at Sheffield Wednesday. The Argentinian is highly unlikely to see any first-team action this campaign, however, with Ospina seemingly being preferred for cup matches.

That could mean that Martinez will feature regularly for Arsenal’s U21 side as an over-age player, but that in itself creates a problem, with three other goalkeepers in much need of game time at that level.

Matt Macey is the usual number one for Steve Gatting’s side, with the former Bristol Rovers goalkeeper having also participated in the first-team’s pre-season tour of Austria. Macey is excellent at making saves from close range, but can be susceptible from set-pieces.

Beyond him, Deyan Iliev (pictured) has been at Arsenal for two years now but still can’t be described as consistent. The Macedonia U21 international also has good reflexes but remains somewhat error-prone, as evidenced by his sending-off against Barcelona in the UEFA Youth League last season.

Macey and Iliev have both featured for the U21s this season, but the same can’t be said of Josh Vickers, who spent much of last season on loan at non-league Canvey Island,where he performed well. The 18 year old returned to Arsenal for their Youth Cup matches towards the end of last season and produced superb displays away to Charlton Athletic and Chelsea.

That is not all. Ryan Huddart is next in line, with the tall shot-stopper having featured regularly for the U18s in the past year. He is already on professional terms and is likely to be joined in that regard by Hugo Keto, a promising Finnish goalkeeper signed in the summer.

How Arsenal will manage all of these young goalkeepers remains to be seen, but one thing is for certain, at least one of them will end up hardly featuring whatever happens. Iliev was linked with a permanent departure last summer and that could still materialise in January, whilst Martinez could also go on loan, which could leave Vickers to compete with Macey for U21 duties.

With three rather young goalkeepers already in the first-team squad, though, it will be a difficult task for any of the fledgling custodians to make a sustained breakthrough.

Nice dilemma. BRING ON THE SCUM!!!

Not so nice for the players involved.

If only we had the same dilemma with central defenders

We could have had if Vermaelen had stayed. 🙁

I like what i saw with Hayden the other day. i know he is still inexperienced at the highest level, but he sure shows a lot of promise

Unlike outfield positions, it is hard to bring young players through the system to be goal keepers.

They tend to hit PL standard by around 25, and should be at lower clubs gettig first team experience until then. Top clubs can afford to lose points blooding GKs coming in, and there is little chance for rotation.

It would be easier to just buy a good experienced keeper when we need to.

Wasn’t he involved in that ridiculous 7-5 against Reading too?

I like these youth team updates. Keep up the good work!

I agree. The Capital Cup loss was a bit sad because I love watching the young players come through the system.

I wasn’t very impressed with Martinez when I was at Reading 4-0 down, still turned out to be a decent night ⚽️⚽️⚽️⚽️⚽️⚽️⚽️

buy all the keepers!!

Well,we pay the coaches, so they should solve this.

I initially thought the pic was a mock up of Chesney and Ospina.

Loans are always a good option for a time. The other clubs pay the wages and the keeper gets playing experience. It’s a tough job being a goal stopper there’s limited places available compared to outfield positions and they generally don’t hit peak till mid-late 20s. Good luck to all our keepers in breaking into the first team indeed all our youth squad.

Not nice for the goalkeepers especially at this point of their career but it is normal in young ages. Martinez should go on loan. Without any doubt. I can’t see him becoming the chance to play this season. As to the others: Still too early to know if they can make a career. Some of them won’t play in BPL but being a player for Arsenal makes you interesting for other clubs in Championship aso.

Competition is the most important part in football. The chance to play for a big club is very low.

Think I saw a rumour the other day that some young Belgian’s father had said Arsenal were interested in giving his son a trial – “the next Thibault Courtois” I think he was called. LOL.
Keep up the good work Jeorge – always interesting to read your posts.

In truth loan spells are usually less beneficial for keepers than for outfield players – whilst the spell at Brentford was fantastic for Szczesny, most clubs would be understandably reticent to throw a young keeper into an important first team game. Martinez got some game time at Wednesday last season but they opted for the experience of Kirkland more often than not, which left him kicking his heels on the bench. The game is flooded with solid keepers looking for a club and you only have to look at the difficulty that James Shea had finding a club to see… Read more »