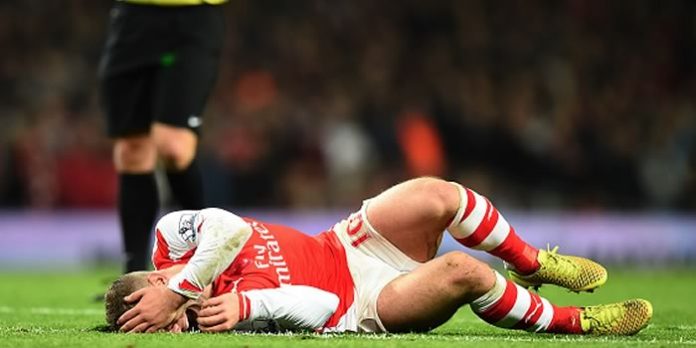 Reports are circulating this morning that the ligament damage sustained by Jack Wilshere’s left ankle could see him sidelined until March…which seems a bit odd, seeing as he’s already been ruled out until March!

The England international picked up the injury after crunching contact from Manchester United’s Paddy McNair in the 2-1 defeat on 22 November and required surgery.

The Arsenal website currently states that the expected recovery time is three months, meaning the earliest he’d return would be the end of February.

For some reason The Sun and The Mirror are claiming that Wilshere has suffered a setback and won’t be available in January. January? When the fuck was he ever out until January.

So, in conclusion it’s all guff. Nice one lads. Take the rest of the day off.

With all the things to get narked about, this seems an odd one.

That’s a very broad generalisation , I’ll have you know that there is a very large Group of masturbators who happen to be good folks , and not click-baiting tabloid scum.
There is a stigma on these people on us , I mean them that has to be lifted.

Yes, I agree. I’d take them by the hand and shake it.

Have they got Bono writing for them?

for a white guy

I’m worried that Henry won’t sign a new contract – which would leave us relying too heavily on Stapleton.

It’s okay Trev, I have just heard on the telly that Drake is in full training and and we are interested in some young English lad playing for Torino, called baker, or something. Never heard of him, anyway . . .

Thanks for the reassurance Gary. However, will they be able to prise Drake away from that sea air in Plymouth?

Will the new jerseys from Nottingham Forest arrive in time for the game?

Knob kockeys got a big laugh from me!

Have they got Moysey writing for them

Embarrassing that they are even allowed to print this drivel. Next we’ll hear Ebola has infected all 20 billion inhabitants of Earth and that we’re all cactus. Least the Earth will be red tho amirite lolz.

Hank Wammers? Isn’t he a centre back for Anderlecht? Maybe we should sign him.

The Ghost of Paul Robinson
Reply to  Ger

Diaby won’t be hard to find, just tug on the end of the linen wrappings.

Kicking us when we are down, or in Jack’s case kicking his ankles with the same old regular impunity.
Screw Murdoch’s media empire and the public broadcasters.

Steven Howard also wrote something along the lines of; ” Wengers transfer policy has been appaling failing to get the much needed defensive cover and without Alexis’ goals they would be even further down the table” To be fair we DO have Alexis’ goals because Wenger bought him, therefore his point about his transfer policy is a bit skewed. We all know ge fucked up in the transfer market but at least give credit where due for Alexis He also wrote about Wenger’s policy of buying brittle players as his fault and cited gibbs, wilshere, diaby and ramsey. The first… Read more »

No arsecast this am?
Shame because it certainly makes work more interesting for an hour or so!

Funny how these stupid stories randomly surface after a defeat… The papers just love it when Arsenal lose.

Has Steven Howard ever written anything positive about us?

We might as well write off Jack for the rest of season: even if he’s back in March he won’t be fit until the campaign is coming to an end. A shame because he was playing well before he got injured. Interesting article by Arseblog today; even as somebody who’s fed up with Wenger, I found the abuse in that YouTube video shocking. But sadly it could be the beginning of a sea change in the supporters’ attitude to Le Prof. The problem for Wenger is that he can no longer hide behind the financial excuses: when you are spending… Read more »

Does that offer include an opportunity to work with Gilles Grimandi?

My personal feelings aside, I dont think its realistic to expect awenger to go at season’s end either voluntarily or otherwise. His position is becoming increasing untenable however, and I dont know that he has it in him to make the nessecary changes to his financial and tactical approaches to the game in order to make us truly competitive again. Im hopeful he can turn things around but Im equally stoic about a possibly rough 2.5 years ahead.

Arsene did make changes to his financial position, Sanchez, Ozil and Chambers. He made those changes at the first opportunity he got after new sponsorship deals and the stadium debt finally being cleared. You can’t then suddenly buy the perfect team. Annoyed he didn’t buy Fabregas simply for the sake of it.

But even if you are right about not going forwards, we’re not really going backwards either. Standing still in 4th is getting harder every season and breaking into the top three consistently will always be a problem unless we have more income coming in. United are back near the top precisely because they have a huge income and so can spend a huge amount on players even during their shitty years. We were happy to get new deals in place, but then, so did all our top competitors so the advantage Wenger was crowing about was effectively wiped out within… Read more »

I saw the video of Arsene getting booed (and then some) at the train station after that shocking showing against Stoke. I thought it was truly shocking, and I found it quite difficult to watch the whole thing. I understand people are (including myself) extremely frustrated, especially the way we lost that game to essientially a pub side. However, shouting that kind of abuse at AW and the rest of the squad is absolutely shocking behaviour, totally inexcusable regardless of the result, and those fans responsible should take a long hard look at themselves, as they’re grown adults after all.… Read more »

You know things are bad when a Fatgooner comment sound relatively rational and when he recieves more thumbs up than down.

Arsenal will have a strong season, starting……..now!

I reckon we will go nuts in January. Spending like a re-run of Brewsters Millions. Hummels, Badstuber, Sergio Ramos. Y’all can expect a call.

Thought of the day: How do you know ET is a Chelsea fan? He looks like one.

Jack never seems to stay fit long enough during any season to be able to show his true potential. Whether this is just him being naturally fragile or mismanagement of his fitness and rehabilitation, frankly I doubt we will know for a very long time. With or without him, we have still been an expensive flop this season and I have said it many times that we will no longer challenge for top honors under Wenger’s charge. His blind spots are becoming down right embarrassing and our historic rivals are…… well….. History I say this with a sense of irony,… Read more »

Lets all look on the bright side….(tough at this time yes but still) >Everyone is doing shite, bar Chelsea and City the latter only of late. (hence we can afford slip ups compared to seasons past) >We are defending champions in the FA cup which hasn’t started yet (Still in with a hunt of back to back) >We have qualified for the champions league knockout (doesnt start till Feb, which with all things going well we should have close enough full squad available) At this moment in time, everything is going against us, results, injurys, and publicity (i.e that video).… Read more »

The anger that comes out of fans like the ones at the train station is moronic. You’d swear they were actually owed something by the club or something. Your an Arsenal supporter, either get behind the team or fuck off. Not saying people cant have reasonable discussions but all this hyperbolic abuse is fucking disgraceful.

Do the ‘fans’ who boo at grove realize that they are sitting in the stadium built by the man they are booing.
Maybe it’s the younger generation who don’t remember the 80s and have been spoilt by success (also by the man they are booing), but it seems to me that the average football fan these days has no idea about the basic logistics of a game where not everyone is going to win something, and supporting the team should be enough.

There are four things we can hope to win each season. The majority of our fans have written one of them off as a joke and a distraction from the serious competitions. There are 92 clubs competing for that “Mickey Mouse” Cup. There are 20 clubs competing for the Premier League Every club in England and Wales competes for the FA Cup (and we came out on top of them all last season!!!!) All of the very top teams in Europe compete for the Champions League. We don’t have a “Right” to win any of those. We are still in… Read more »

No pedants gonna point out the March-March error in the first para?..