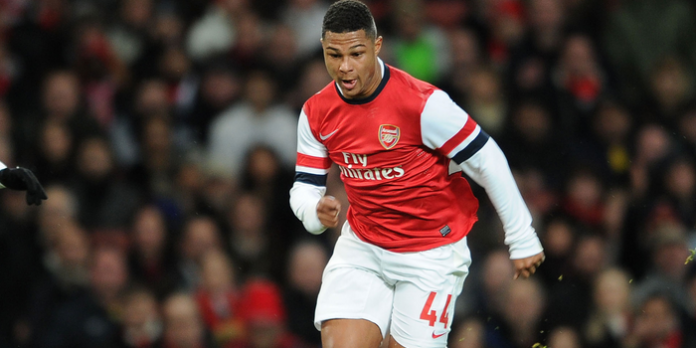 The German U19 international enjoyed a superb breakthrough season in 2013/14, but has endured a miserable time in the last twelve months owing to a succession of injury setbacks.

Gnabry sustained a knee problem in March last year,  which ruled him out of the last couple of months of last season. After undergoing a successful period of rehabilitation he was able to represent the U21s in October, with the youngster’s confidence being boosted by a goal at that level away to Stoke City.

Then came another disappointment for Gnabry as an injury suffered in training meant that he was forced to spend another few weeks on the sidelines. He made another brief return for the U21s against Newcastle United last month, but hasn’t featured since and has been absent from the past few training sessions with the senior team.

It is looking increasingly unlikely that Gnabry will play a competitive game for the club this season. There had been hope that the dynamic winger would head on loan at some point this campaign, having underlined his credentials last season, but those plans have now been put on hold.

Gnabry’s 2013/14 campaign contained plenty of highlights, including his decisive goal against Swansea City in the Premier League and his memorable performance against Tottenham Hotspur in the FA Cup. The youngster’s potential was rewarded with a new long-term contract, but, since then, he has had to bide his time and wait patiently for his wounds to heal.

When Gnabry does eventually return, which in all likelihood won’t be until next season, there is a genuine question as to how he will fit into the senior set-up. There is uncertainty about Theo Walcott’s contractual situation, but Alex Oxlade-Chamberlain is progressing well and Danny Welbeck has also been utilised in Gnabry’s preferred position on the right wing.

Gnabry has shown on occasion that he is also capable of operating as an attacking midfielder, but his qualities are best suited out wide, where he can beat opponents with his trickery and pace.

All is certainly not lost for Gnabry. He doesn’t turn 20 until the summer, whilst he has the security of having three more years to run on his Arsenal contract.

The aim for him now is to simply avoid further setbacks and get used to playing regularly again. If he can prove his fitness then a loan spell could follow next season, enabling the promising youngster to get back on track in his quest to reach the top.

A year!! for a rather vague knee injury.
You can build a new knee in 9 months!

I would love him to succeed at Arsenal – but he needs to get fit and get in the side or get shipped out.

Why are you always commenting?

Because he is a gooner and has an opinion? Be gentle with your gooner family fella please.

Patience is a virtue.

I am patient. I have been with diaby, rosicky, wilshere, ox, Gibbs etc I simply never liked the “vagueness” of this injury and it always set my alarm bells ringing. Knee injury for a year sounds like a cruciate but it hasn’t ever been given a name. If he doesn’t play as blogs suggests until next season, he will be a year and a half out for a knee problem that the club is secretive about. How does a kid have such a serious problem and can he every recover? Frimpong didn’t I fear for the guy, if he comes… Read more »

Frimpong didn’t and that’s true, but Frim is also a bit of a nutter. I liked him, and that side of him, as I enjoyed him crunching opposing players (you don’t want your own committing stupid fouls, but at least with Frim it was always at least amusing). Gnabry seems a completely different sort of young man, and I wouldn’t doom and gloom at this point. Is a long time to be out, though.

Yes indeed, good things come to those who wait, while your competitors move swiftly forward

Great potential, can be a huge player for us if he fulfils his potential, quick, v skilful. Time will tell. Would be a better bet than Walcott I reckon.

I remember going to Norwich away a couple of seasons back where we were utterly shite.

Gnabry coming on as sub was the only remotely positive element to the performance that day. He’s one to keep hold of, particularly if Theo is going to be flogged off (although with Theo I still have this nagging thought that he’ll go to liverpool or somewhere and score 20 a season…. *shudder*).

Arshavin's Dietician
Reply to  the only sam is nelson

Walcott will never be a 20 goal a season guy, at Arsenal or anywhere else

Be gentle with your gooner family fella

Gnabry can provide depth to our squad with all the injuries we usually have. He plays like the ox imo so the boss can rest the chief defence splitter at times.

Le Coq has shown that Never say Never as long as you keep doing what you know how to do BEST. Gnabry has what it takes to make it to the highest level although I believe a loan spell will do him a whole lot of good to sharpen all the rough edges.
Jenko is benefitting from that now.

Interested to see what will happen to Corporal Jenks next year with young Bellerin given his new deal. He’s certainly giving the boss something to think about with his performances and West Ham… perhaps a swap will be in order, Keep Debuchy as No1, Jenks as number 2 and give Bellerin a year on loan to get regular games… maybe.

Is Debuchy better than Jenko or Bellerin? They’re both playing pretty well, and would are young enough to battle it out for us for years…

Both have been fantastic this season but Debuchy has age and experience on his side. The other 2 are young, keep 1 as our #2 and ship the other out to another PL team to gain vital experience.

Besides, he was talking about the future of the team – Santi is soon to enter his twilight playing years, as awesome as he is.

Are you insane? Jenkinson looks good because he’s playing at West Ham, Bellerin is performing even better at a higher level altogether. Jenkinson’s better off at West Ham, that’s his level.

Bellerin needs to improve his heading and learn a bit more about positioning. He is doing Ok but as we noticed at Manchester United when Fellaini was targeting Bellerin to get the headers and Per Mertesacker had to help him out. This opened up the gap between Per and Kos and it was exploited by Rooney.

I suspect he’ll spend the first half of next season out on loan somewhere. Great talent though and he’s got far more about him than Walcott will ever have.

Spectacularly unfair on Theo there mate. I think when Theo’s been fit over the last 2 or 3 seasons, he’s given us loads and not just pace. His finishing and touch has improved immeasurably.

Agreed. I don’t get the Theo hate. Sure, he’s pretty erratic, but his goalscoring record is actually very good, and he had a good understanding with Giroud. We could definitely do a lot worse than him out wide. It would be nice if he can get back to that pre-injury form (and, you know, not be a dick about contract demands…)

A year on the sidelines seems to be a rite of passage for Arsenal youngsters. Oh well, it’s a good job once they get that out the way, they come back stronger and are fit and healthy for lengthy periods. Yeah, if only.

His progress has been impeded.

I didn’t think he was up to the same level when he came back for the youth team and he looks a bit heavy.

Will have to work hard to get back into contention with Akpom now making a very strong case for himself.

Don’t see too many opportunities either this season remaining for him to feature.

Maybe a loan will be useful for him.

Unlike The Ox, Gnabry is a genuine winger. As soon as he is incorporated into the first team, it frees The Ox to go back to CM, and also Welbz back to CF. It seems bringing Gnabry into the first team is more likely to mean we let go of a CM rather than a winger.

Ox to CM? To play where? CM with Coq, Ramsey, Jack, Ozil and Santi? Be real.
Ox not a winger? He’s not a wing-hogging winger, but he actually keeps wide and yet also comes in. Makes him more unpredictable and more complete.

As for your Welbz to CF, over who? Giroud or even Sanchez? Ok mate.

Gnarby will feature for us the first half of next season, and then probably get a loan in January.

Ox is amazing as a CM, have you forgotten when he bossed it against Milan? We’d have gone through if they didn’t deliberately foul him out of the game!

He’s definitely got the grit and athleticism to play cm and he’s certainly not scared of a challenge or 2…..

Thanks for update Jeorg. Appreciate seeing you on here sharing your insight into the future raw materials of our club.

Serge has no ceiling as far I can see – technically there are others who showed they were made of the right stuff from their very first 1st team appearances (Cesc, JW10) – i think maybe only Serge has combined the technical side with his extraordinary physique & tactical maturity. He’ll be good enough to carve out his own place as a Gunner, no doubt. Good luck to him in making a full recovery.

Thanks for sharing your insight with us Jeorge.

Serge has no ceiling – maybe only Cesc & JW10 demonstrated the technical level needed to succeed from their very first 1st team appearances. Serge adds to that a unique physicality and tactical maturity. He’ll carve out his own place in a successful Gunner’s team in the next couple years. No doubt.

I’d keep all 3 of them and rotate. This is a tough league with 4 cups available. Debuchy has the experience the Corporal and bellerin are the future. Andy remember to only post when you are really sober mate. There no one here as true Gooner as jenkinson the boy beside being a player is a red blood Gooner. He has proven his talent whilst playing for arsenal mate. He is on loan to get playing time and develop further.at West ham he has also proven it because they were on top for half of the season. The boy ain’t… Read more »

Not forgetting the awesome prospect that is wellington silva finally arriving in the summer after his long loan spell while awaiting his work permit. Said to say it but Theos days may well be numbered.

High hopes for Gnabry in an Arsenal shirt. Plenty of time to find his stride. Maybe a loan spell next year or maybe right back into the squad.