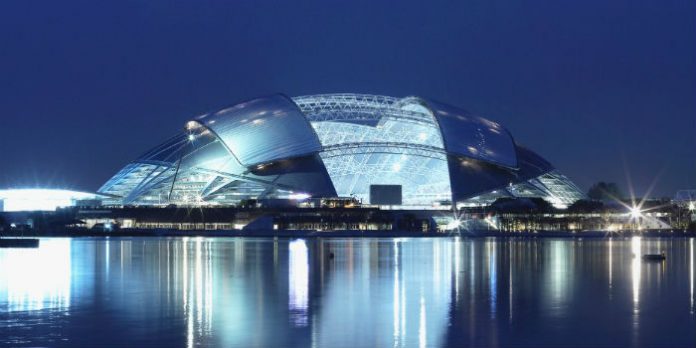 The Premier League have confirmed that Arsenal, Stoke City, Everton and a Singapore Select XI will participate in the Barclays Asia Trophy at Singapore’s state-of-the-art National Stadium in July.

The four-team knockout competition has visited the region every two years since 2003 being hosted by Kuala Lumpur, Bangkok, Beijing and Hong Kong.

Matches will take place over two matchdays on Wednesday 15 and Saturday 18 July 2015, with a final to determine the winner and a play-off to decide third place. There will be two matches on each day.

As we mentioned back in November, The Gunners haven’t played in the sovereign city-state since 1991 when they beat Liverpool on penalties in the Caltex Cup; David Seaman saving the decisive spot-kick from Ian Rush after Nigel Winterburn’s last-minute equaliser.

The jaunt to Singapore – celebrating its 50th anniversary this year – is likely to be part of a wider tour of the Far East designed to further strengthen ties with a region visited in 2012 and 2013. No doubt confirmation of further matches will be forthcoming.

Hope Arsenal play only Everton and Singapore XI. Don’t want us playing the Orcs then starting the season with half of the team injured

Zorro in the Box
Reply to  EmanAFC

Still, if you want to showcase the Premier League and Arsenal in Singapore, Stoke wouldn’t be my choice. Southampton, Swansea or hell even West Ham these days.

Third Plebeian
Reply to  Zorro in the Box

“if you want to showcase the Premier League and Arsenal in Singapore, Stoke wouldn’t be my choice” === I see what you mean, but in a way, Stoke does showcase the Premier League, or one part of it. Namely, the thuggish, idiotic, cuntish part of it, because, let’s face it, teams like Stoke do exist in the league, and a game between Stoke and Arsenal represent the two opposite ends of the spectrum of sport in England: Rugby vs. Football. (Except, of course, that rugby was historically a gentleman’s game, and Stoke City are not even human let alone gentlemen.)… Read more »

That was very harsh mate. Only a small minority of Stoke fans are cunts.
And M Hughes has turned them around. He could come in when Arsene retires …

yeah, and the same day M Hughes takes over Arsene Wenger will launch his private space programme and serve free pancakes on the moon with Silvestre dressed as a french maid

gooner 44
Reply to  Zorro in the Box

I AM SO FUCKING HAPPY!

Fellow gooner from Singapore. Finally I can wear my arsenal jersey to an arsenal match.

Crap. I thought after the success of the New York match last summer they’d come to North America for an extended tour this year. Surely the fact that they had nearly 1,000,000 ticket requests for a 25,000 seat stadium in New York should have made it clear there’s a huge support over here that’s just aching to see them!

I’m sure the Gunners will be heading over the pond again soon, never fear.

As you say, huge support. Also big country, lots of money, and US owner.
But no more Thierry Henry, sadly for you.

By the time Arsenal come to NA again, with any luck Thierry will be one of the coaching staff. So yes, more Thierry Henry, happily for us.

Well we just won a pre season trophy without playing. Unless the Singapore team is better than Brazil 1970 but thats unlikely

Pitch is a fucking minefield through – take a look at a couple of pictures from the Brazil-Japan they played there about six months ago.

So, Stoke with home field advantage then?

They are working on improving it before the tournament is held and from what I’ve read they are going to considerable lengths to do so. The pitch was blasted by both the Brazilian and Japanese FAs after that friendly and the Singaporeans are not a people to take those sort of criticisms lightly. I’m sure it’ll be up to standard and then some by July.

Cannot wait to bag three goals and the tie at Monaco.

Three unanswered goals wins it for us

Considering doing the flight from Brisbane. We always get forgotten about down here 🙁

Don’t worry mate, I come from London and they’ve forgotten about most of us fans aswell

You got a freaking 8 months of Arsenal action in your face from August till May.. Let us have em for few days, dude.

I hope the stadium management get that pitch up and proper. It was rubbish the last time Brazil swung by.

Am so excited!! Hopefully the pitiful pitch will have been sorted by then. Don’t wish any players to suffer unnecessary injuries, least of all an Arsenal one. COYG!

The thought of playing stoke in a preseason game is not a pleasant one. Two times per season is two too many allready.

Actually, I have been planning for a visit to London to watch my team play! Since I got married only recently, cost just went up by 200%! Can’t explain how excited I am now. .! I will be in that trophy parade when we win next year’s title though!

Looking forward to seeing them here!

Happy gooner from Singapore here. But the pitch was in very bad condition when Brazil played Japan in 2014. I think Juventus played a match there too. According to the news, the grass used in this stadium is the same as the ones Arsenal used in The Emirates:

Spot the odd one out.
That’s right, Stoke, as they’re a bunch of Neanderthals while all the others are football teams.

So exited. Yayyyyyy!!! Finally get to watch Arsenal live and hopefully meet some of the players.

I hope Arsenal bring a strong squad over. Was there to watch the Gunners train at the Padang. Still kept two photos of David Seaman & Tony Adams with their signature on it. Took the photos at the Airport…develop them (mind you no handphone back then just old negatives) & brought the photos next day at their training session. Have to run after Tony though before he obliged.
Definitely will be chasing them again this time….but not sure can catchup with them this time around.
Anw about time they visit the Lion City again.

Why would we wanna play stoke in pre-season?

I like Singapore. I might even be there this summer. But I feel the club is missing a huge opportunity in the United States where the game is growing and the buying power is returning (large demographics) Frankly, a tour of the US (NYC for starters) leveraging on Alexis’ growing star in particular is a better commercial prospect. There is plenty of latent potential for growth and Arsenal comes in early. Should coincide with the development of some proper scouting/Development Academies (Bi-Coastal) as oppose to the the less serious set up at present. It will give the club an opportunity… Read more »

Also why Everton and Stoke?

Should have invited a good Brasilian team maybe and say Juventus. Contrasting styles.

Hi …it is better than nothing..

Please come to North America in the next decade…..

Arsepedant
Reply to  Save 75 cents

Or the next year or two …

So there will be 1 team we won’t play? Hope it’s Stoke.

Meanwhile, us aussie fans are subjected to a visit from Spurs.

From Singapore here, so excited to have the team visit us this summer. Lucky enough to catch 3 games at the Emirates last season (3/3 wins) and spent many fantastic hours at the stadium tour!

I’m sure the team will enjoy the Singaporean weather and food. Oh and no duty-free cigarettes allowed in Singapore and we just had a law passed that prohibits Shisha smoking…. Wenger knows indeed 😉

Downside is my girlfriend is just going on and on and on about Giroud signing on the Arsenal shirt I BOUGHT for her. sigh

Finally waited for the chance to watch Arsenal playing in my country! Bonus that I might just get to throw something at the Orcs who play for Stoke!

Come on Arsenal…come to Australia while you’re in the area! Forget North America, is not all about the $$$.
Besides, I hate flying to London for matches! I remember paying 50p to stand on the North Bank way back…how many of you can say that????????????

Me….flew a the way to Singapore just to watch my favourite..Am Singaporean been living in Brighton for the past 40 yrs..Hve u been to Old Wembley to watch the FA Cup thriller 1979 against Man United. .Last minutesgoal scored by Alan Sunderland..I am now 70 yrs old been a fan all these years.. maybe we can shar some old photographs of yesteryears.

When will we can buy the tickets for it?

Fan in Thailand When and How we can buy tickets ?????

Tickets out! you can head over to singapore sporthub website to buy!

This website uses cookies to improve your experience while you navigate through the website. Out of these, the cookies that are categorized as necessary are stored on your browser as they are essential for the working of basic functionalities of the website. We also use third-party cookies that help us analyze and understand how you use this website. These cookies will be stored in your browser only with your consent. You also have the option to opt-out of these cookies. But opting out of some of these cookies may affect your browsing experience.
Necessary Always Enabled
Necessary cookies are absolutely essential for the website to function properly. These cookies ensure basic functionalities and security features of the website, anonymously.
Functional
Functional cookies help to perform certain functionalities like sharing the content of the website on social media platforms, collect feedbacks, and other third-party features.
Performance
Performance cookies are used to understand and analyze the key performance indexes of the website which helps in delivering a better user experience for the visitors.
Analytics
Analytical cookies are used to understand how visitors interact with the website. These cookies help provide information on metrics the number of visitors, bounce rate, traffic source, etc.
Advertisement
Advertisement cookies are used to provide visitors with relevant ads and marketing campaigns. These cookies track visitors across websites and collect information to provide customized ads.
Others
Other uncategorized cookies are those that are being analyzed and have not been classified into a category as yet.
SAVE & ACCEPT
wpDiscuz
54
0
Would love your thoughts, please comment.x
()
x
| Reply