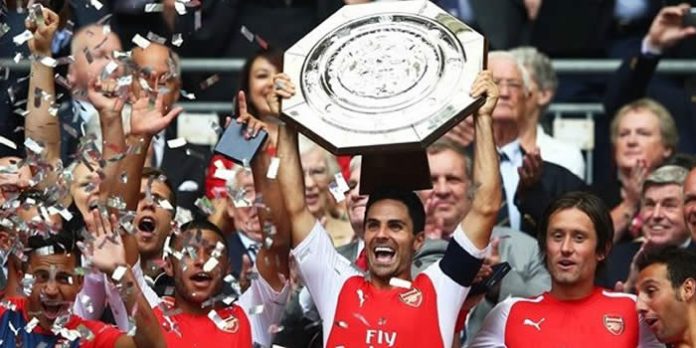 Were Arsenal to be successful in the FA Cup final on May 30th, their new campaign would begin barely two months later as the Community Shield has been scheduled for August 2nd.

The FA have released next season’s fixtures, and after the traditional season opener, the first round of Premier League games take place on Saturday August 8th.

It means the summer break is shorter than usual, and with Alexis Sanchez due to take place in the Copa America, which runs until mid-July, we might have to make plans for that if Chile make good progress in the tournament.

The reason for the early start of the new campaign is the European Championships the following summer, taking place on specially inflated cloud cities sponsored by Budweiser. The games, broken down into 15 minute spells to allow for more advertising breaks, will be broadcast live via a special app which requires you only to input a sample of your DNA to make it function.

Bookies have installed The Republic of Syldavia as firm favourites.

Sounds like our Duracell bunny may run out of batteries, two heavy summers in a row.

We need to be planning to give him a rest. Hope we make 3rd, at least to avoid the qualifiers for the CL. Should be OK, but not good if not.

cope with a Copa?

I think it could be a metaphorical ‘make or break’ moment for him, actually. I’ve been so impressed with him, so much so that I truly believe he is capable of making the next step in his calibre as a player. Something I think he could achieve through this. I think we could all say that he is comfortably world class. There are further categories though: You obviously have players like Messi, Neuer, Ronaldo, Suarez and I would also say Iniesta, who are so abundantly talented it’s silly and represent the best in the world. Beneath them, and this is… Read more »

Özil among the world class? No?

One more reason why it’s a bit of a pointless tag to give someone, different players have different levels of ability who perform differently in different teams. Except Messi. He’d rip it up for any team, in any legue.

Thank god. Alexis aside, in odd-number years I’m clucking like a skaghead for football by the time August rolls around

Potentially no Emirates Cup this year?

Hopefully not, it is given here: https://www.kixfootballtickets.com/emirates-cup-pass-for-day-1-2-matches-for-the-price-of-1-tickets-5555 as on the 2/3 August, so only comes into play if we lose the FA Cup and don’t play the Charity Shield. Given the FA Cup final is the 30th May and we have an overseas tour in July then the players only have a month and a bit off. If I had the choice I’d say no pre-season tours (sorry those who will go along, I’d love to see them live in your position), just the Austrian training camp and come out firing at the start of the season, how we used… Read more »

It seems nowadays you need to have a billionaire Russian sugar daddy, with unlimited funds, to prepare properly in the summer, instead of going to beg for money in Asia or America. We did it, United did it, Liverpool did it, Chelsea didn’t.

The republic of borduria is outraged, outraged I tell you! Those pesky syldavians…

A Tintin reference… Blogs I love you.

So Sanchez will have two Copa Americas in two summers. Followed by a potentitial Confederations Cup. Then there’s another World Cup also followed by another Copa America. Seriously the guy wont have a proper summer rest untill he’s 31!

Hm. I wonder if that’s why Barca were willing to sell him.

Yep. Barcelona have no other players from South America that will participate in Copa America. Sounds plausible.

Well Chile won’t be in the Confederations Cup, so no need to worry about that. But it’s not like he’s the only South American player who will be dealing with this. Most top teams will have one or two at least.

I hate posts that begin with “Were Arsenal to be successful in the FA Cup final on May 30th”… Have mercy on the superstitious. It’s bad enough Villa is managed by an ex Tottenham player (you see how I’ve not mentioned his name there… eh? eh?)

You may have just cursed us all

Don’t think AV will roll over easily. On paper the gunners are favourites. Sherwood will replicate
Swansea and if Arsenal continue their pattern weaving and endless passing,they will be ripe for the likes of Benteke to score.
Sometime ago Arsenal were lauded as the best passing side in the epl. They won nothing until last season’s fortunate win. It’s better to have less possession and win .

Tim Sherwood doesn’t have the tactical knowledge to sit back for 90 minutes, they’ll come at us and if we have a very bad day they might nick it, but it won’t be much like the Swansea game at all.

Fortunate? We dumped out 3 of the top 6 sides from last season on the way to the final.

Doesn’t help that this season is ending late.

Welbeck and Ox will be looking to take his place and not let it go!

The two of them playing at the same time would have to up there work rate to match Alexis.

Hmm, interesting. All speculation, but figures that Sanchez will miss the first month of the new season. So who will play LW? Based on his last two outings (and the fact we’re stacked in CM positions), I guess Jack will play LW, with Ox RW. Something tells me (once again based on his last two outings) that Jack will be outstanding in that position, along with Ox stepping it up a notch on the other side. Laced with speed, the passing and creativity of being CMs (or on Ox’s case, playing as a CM significantly), sheer direct dribbling, I feel… Read more »

“All speculation of course,”

“All speculation of course.”

Nothing wrong with reminding people it’s only an opinion, there seem to be plenty of people on the internet with very short memories.

I’ve got nothing against opinions, just pointless drivel.

It’s not so bad. The majority of the squad ( new signings included ) will have 2 months off. Sanchez can return in September.
Having the OX on the left wing for a month, wouldn’t be such a disaster.

Admittedly, Sanchez will have a shorter holiday than the rest but He’s likely to be chomping at the bit to get a game soon after.

Would be nice if we could beat Chelsea 🙂 I think we need to strengthen our squad in the summer with someone better than Olivier Giroud. Just watched the Bayern Münich vs Barcelona match, anyone who watch those big matches would realise how far behind Giroud is from pure world class.. I’d say we are lacking in 3 positions above all.. Perhaps even 4. Goalkeeper, Striker, Winger. I think that Mertesacker is a big doubt now, he’s not really been excellent this season. He’s gotten better and better when Koscielny got back from injury but still I am not 100%… Read more »

Don’t count your chickens blogs. I fully expect Aston Villa line up 4-6-0 for the Cup and then chuck on Benteke or whatever his name is for the last five minutes…

My wishlist for summer time: After a shock move from Messi to Munchen, Lewandoski becomes available and decide to relocate his wife, kids and mistresses to London. Morgan Shneiderlin finaly realise his dream move. On the day he is presented to us fans he cries and declares: “This is the best day of my life, I swear to shield the back four until I die or eventually retire”. Lastly and obviously, Peter Cech, who had to hide all this years that his mum is black. It is with a light heart that he joyfully cross London wearing an Arsenal shirt… Read more »

Zutroy and the Republic of Syldavia surely to win it all.