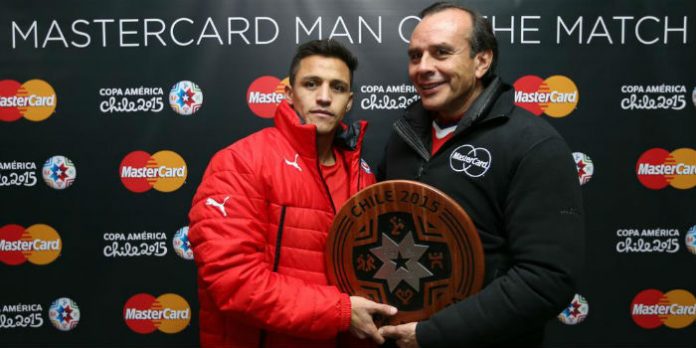 Chile moved a step closer to winning their first ever Copa America as they progressed to the semi-finals with a hard-fought 1-0 win over Uruguay.

Alexis Sanchez put in a man-of-the-match shift as Mauricio Isla’s late winner knocked out the holders who finished the game with nine men.

The winning goal, an 82nd minute drive from the edge of the box, came after Edinson Cavani had received his marching orders for two yellow cards.


The PSG man paid the price for flicking his finger across the face of Gonzalo Jara who made up the ref’s mind by going down like a ton of bricks. Replays appear to show Cavani having his arsehole tickled by his opponent just seconds before.

To rub salt in the wounds Jorge Fucile earned a second yellow of his own for a tackle on Alexis Sanchez in the dying moments. At full time, even without Luis Suarez in their ranks, the Uruguayans maintained their world-renowned cuntishness by going bat shit crazy at the injustice of it all.

Chile will face either Bolivia or Peru, who play tonight, in the semi-finals.

Last Sunday David Ospina’s Colombia secured a 0-0 with Peru that ensured both teams progressed to the knockout rounds from Group C behind winners Brazil. It was the Arsenal keeper’s second clean sheet of the competition.

Colombia face Argentina in the quarter-finals on Saturday evening. The winner will play either Brazil (already vanquished in the group stage by Colombia) or Paraguay in the other semi-final.

Half of my wants to see Chile knocked out and Alexis resting.

The other half says ‘come on Alexis you beauty’.

Think by this point it makes little difference, it’ll be begnning of July whatever happnens won’t it? Rather him come back a couple of day later with a winners’ medal!

Watched some highlights, no wonder rival fans want to kill each other, and do, after the disgraceful conduct of teams. Thankfully Sanchez didn’t have his leg broken. Off topic just seen Ray thick as platted dung Wilkins say Stuart even thicker than platted dung Pearce was unlucky to lose his job bla bla. This is the same Pearce who stated that Bergkamp was a waste of money and we would have been much better off paying an extra million and getting Stan the dog lover Collymore. Can you fucking believe, after making a comment like that the FA still saw… Read more »

What year is it?

It was 20 years ago last Saturday that a certain Dennis Bergkamp joined Arsenal, you might be a jonny come lately so look him up. It was also 20 years ago that Pearce made his comment. It was this morning that Wilkins was talking bollocks, as usual, is that clear enough for you.

It wasn’t a criticism of you, you touchy sod!

Then please try to be a bit clearer, don’t know if your name is aimed at others because you think your really clever or it’s directed at yourself in which case I apologise.

Want Alexis to score against Argentina,WIN and get one over Messi. KAPISH !!

Imagine the lift.. He would get to his game after defeating Mesdin & co

Looks like that guy fainted from the smell on his offending finger. We have to applaud Cavani for not smashing his fucking face in. My god South American football is shite, led by the shite-masters Brazil, who gave the shitest shamelessest performance ever seen by a host nation in a World Cup. The games I’ve watched have been dull as ditchwater, and they just love kicking the shit out of each other. At least the refs have been better than they are in the Premier League.

I would watch the Copa America over most other international tournaments to be honest, least almost to a man they look like they give a shit, makes a change!

Giving a shit does not mean you have to kick your opponent to pieces, or give him a public colon examination. Just because someone doesn’t thump their chest and cry every time the national anthem is played, or doesn’t swear at his opponents, or doesn’t sexually assault an opponent, doesn’t mean they don’t care.

Thumbed down for failure to spell dishwater correctly.

Huh…..always thought it was “dull as dishwater!”, you learn something new everyday!
Never stop learning penguins you never know!

Well fuck! Should have continued scrolling, lesson #2 in 5 mins for old Dodgems

To play with Cavani’s bumhole and then feint injury, that takes some balls sir. Although could you imagine Sanchez doing that to Cahill or Kompany before banging in a hatrick!? No defender would want to go near him! I think Wenger should dedicate an hour a day to these tactics in pre season.

Thumbed down for failure to spell feign correctly.

Thumbed down for trying to do my job for me

No mention of Jara flicking his finger up Cavani’s butt to provoke a second yellow?
https://vine.co/v/e5TAFtQ3YQg

Obviously the article was not yet updated before I replied but after the page refreshed it was there. I didn’t know how to delete the reaction and there you have it, downvotes galore.

I’m going to be in Santiago the day of the final. Therefore I want Chile to progress and win it if they can.

That is by far the funniest wind up I have ever seen on a football pitch… Sphincter tickle will go down as the ‘trick’ of the tourney.

It is not funny. What planet are you on?

Lighten up… And while you’re at it, go to your nearest charity shop and see if they have a spare sense of humour they can sell you for a quid.

Still smacking your secretary on the bottom as an innocent bit of banter are we?

No, I smack the boss’ ass. And she loves it!

This is one among the most weird things I have seen on a football pitch. Disgusting.

Will there be video review after the match or it is only an apl thing?

There is nothing sexual about it.

They’re in Chile. How far do you imagine that complaint would go?

Was a slam dunk on the pitch

Nobody comment about Ospina clean sheets!! So sad for him. He deserves better from Arsenal fans. Well done David!!

That may be due to the fact that all signs point to him being elsewhere next season.

Was it just me or did no one burst out into hysterics after watching that clip and the good old arseblog banter on that sickening scene!

Can’t believe none of the papers went with ‘copa feel’ as their headline.

Does anybody else actually think the groper is a fucking genius? This is pushing the boundaries of football. He’s an explorer, daring to tread through uncharted territory in search of new ways to eke out an advantage in a modern era when nearly everything has been already done. He tickled Cavani’s asshole, then got the reaction, and went down, got Cavani a red card, then went on to win the game, possibly helped by the psychological and also extra man advantage. I say genius.