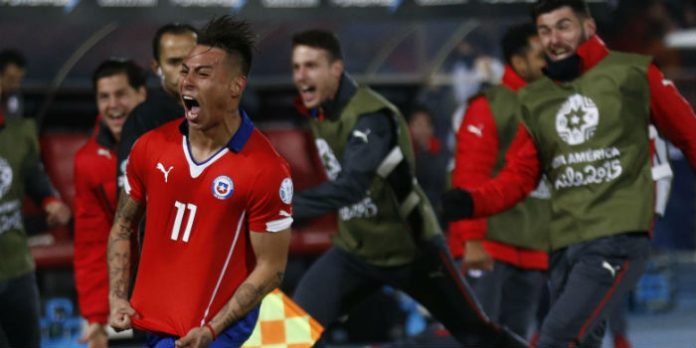 The former QPR loanee pounced on an Alexis pass as it came back off the post to open the scoring three minutes before half time and then smashed a 64th minute winner from long range to send the home crowd into raptures.

Chile were made to work hard for their victory despite playing against 10 men for 70 minutes following a straight red card for defender Carlos Zambrano.


Chile have never won the Copa America in 99 years of trying but will now play either Argentina or Paraguay in Saturday’s final.

Alexis is so great, into the final with a great pass.

Hope he beats Argentina in the final. And then gets a good rest.

Might be the greatest win ever if they beat Argentina (who had Tevez and Higuain on the bench, Messi didn’t score and they still won 6-1). And given Chile only won 2-1 against 10 men.

Not very confident for Alexis.

don’t worry, the way this tournament has been going Argentina will be reduced to 7 men by half time.

I pray they can just pull this one off this time with Alexis scoring a screamer just like the FA. It will be a morale boosting for next season. UCL we are coming for you. COYG

Wow never knew they haven’t won it in 99 years,there’ll be crazy scenes if they do,hopefully alexis and vidal get proper drunk and convinces him to join,

I was selfishly hoping Chile would get knocked out early, but seeing as they’re in the final I hope Alexis smashes in a hat trick and one of the goals gets a knick off Messi’s ballbag. I wonder if Messi would want to die then too. Also would be nice if Vidal could blunderbus into Zabaleta, Rojo, Di Maria, Demichelis, Lamela and Aguero at the same time causing them all to freakishly domino into eachother breaking one another’s legs.

Well, that got dark quickly

This is totally unrelated to the article, but I was listening to the Arsecast Extra earlier and noticed the part about who had the best accent. When the topic of Bellerin’s accent came up the words “Cockney” and “Catalan” were mentinoed when describing it, yet neither seemed to notice the amazing synergy when these two words are squashed together: Cock-alan…. Coquelin.
Is it a coincidence that both players came good in the same season? I think not.
Fate I tells ya.

I’m flying to Santiago this evening! Will be there for the final so fingers crossed for Chile!

I like how Alexis has adapted to the close marking he gets by stretching defences and turning provider. He’s caused havoc in (almost) every game despite getting just the one goal.

It’s also worth noting that Vidal probably should have been sent off very early on, but got away with it (combination of the game having barely started and Chile being the host nation).

The guy in the green pullover behind the posts: Celebrates, then remembers he’s there to take photos. Love it when passion trumps work.

Here’s hoping for an Alexis winner in the final!

I’d like to see Wenger and company to fly down there and give our boy Alexis some support. It would mean the world to the guy.