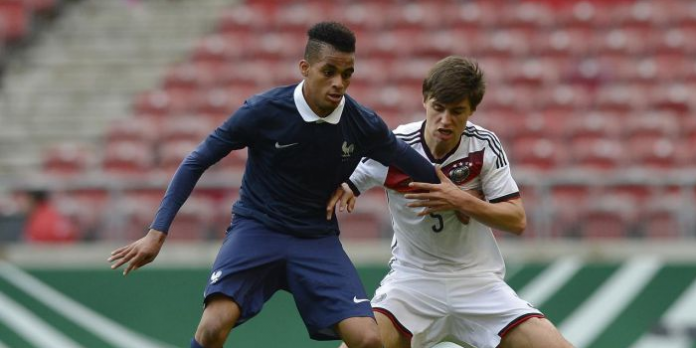 As ever, there is a demand from supporters for Arsenal to make the requisite acquisitions in the transfer market this summer to help bolster an already promising squad.

No moves have been put in place as yet, but, with regards to the club’s youth set-up, there has already been much activity, with three players on the verge of signing deals ahead of next season.

One of them is Kostas Pileas, a Cypriot youth international centre-back who has impressed whilst on trial at Arsenal. The youngster, who is quick across the ground and is an excellent reader of the game, particularly caught the eye during the AlKass International Cup in Qatar and more recently scored in a friendly against MK Dons. It is hoped that Pileas, if he does sign, will help to shore up Arsenal’s defence at U18 level, which has been porous to say the least over the past couple of campaigns.

There could also be two more high-profile arrivals in the form of French youngsters Yassin Fortune and Jeff Reine-Adelaide. Both players have built up a good reputation in their homeland after some excellent displays for Lens and they now look set to move to North London.

Fortune (pictured), a 16 year old attacking midfielder who was also wanted by Manchester United, is expected to go straight into the U18 squad, whilst Adelaide, a striker, will do likewise but, as he is slightly older, could also feature for the U21 team as the campaign progresses.

There may yet be further arrivals in the youth department before the season gets underway. Arsenal will certainly be looking to produce a more consistent set of results at U18 level having suffered the ignominy of finishing bottom of the third tier of the U18 Premier League this season.

One of the most concerning aspects of the U18 league campaign was that several of the players who were brought in from abroad last year failed to impress. Centre-back Kristopher Da Graca, for instance, struggled during most of his appearances, whilst left-back Ilias Chatzitheodoridis, who was recruited from the club’s Elite Academy in Greece, had problems in terms of his positioning.

Savvas Mourgos, another Greek youngster, did at least show some promising signs in terms of his technical ability, but the midfielder wasn’t able to perform consistently throughout the campaign.

It is hoped that Pileas, Fortune and Adelaide, if indeed they do become Arsenal players, will be able to make a much more significant impact during their first seasons at the club.

I wonder if there isn’t a problem with scouting at the youth level, rather than a coaching problem, that’s the impression I’m getting from reading this.

Agree, Vieira was able to achieve much more with City youth team than all those experienced development coaches that we have been hiring.

I’m not sure what your comment has to do with anything. Care to explain?

Totally, it’s crazy the amount of youth talent being integrated into the city squad. Can’t move for 18 year old whizz kids up there.

charley
Reply to  Rozza the samourai

Considering we can’t really point out a break through City youth team player i wonder how sucessful he’s been? We have bellerin from our youth set up last season, hen on a ball had Kane, who’s the kid from City that broke into their first team? please tell.

I pacify myself by saying that that we are not competitive right now only because we tend to play much younger players in a particular age group (from an earlier JB post). Hope we take more steps to bring our U-18s to a competitive level. The only thing I have ever envied about Ferguson’s rein is that brilliant team that he was able to come up with from the youth ranks straight to the senior team. If Wenger can’t do that, no one can. Arsenal have already set the standards on how to run a football club. If we can… Read more »

I think given the fact we try to accelerate players development by playing 17 year olds etc in the under 21s when we think they’re ready we need to bring in such numbers of skilled players under 18 in order to fill the void on such occasions, the rate at which we ‘seem’ to be doing buisness at this level hopefully confirms this practice, the alternative i fear is that ‘WengersNoseHair’ (post above) is right and we’re simply signing enmasse in the hope of uncovering the odd diamond. Here’s to hoping for diamonds enmasse.

yeah basically build a team at 16-18 level and keep them there through under 21 and into the first team.

But ….’he had problems in terms of his positioning’ makes it should like he was standing in goal when he
should have been on the wing !

We have not been producing the young boy that not only breaks into the team but also becomes the best in his position. Even though Anelka did not come from our academy, he was able to win things for the club right away. That kind of young player, I mean. Cesc ? That was a very long time ago.

You must be very young to say Cesc was “a very long time ago.”

Bellerin. Coq. Gibbs. Wilshere. Szez. Were all regulars at u18 level

I hate the world class attribute but you see why I listed Cesc Fabregas only. I was trying to say we are not producing young world-class players. Rooney was at Everton. Also, Cesc Fabregas senior career at Arsenal started in 2003, 13 seasons ago, a very long time ago in terms of wait for the new Bergkamp or Thierry Henry.

gee
Reply to  Rozza the samourai

I’d argue that Bellerin has the potential to be world class, he is still young so time will tell.

One thing that you notice first is that they all have wicked names. Let’s hope their skills match that at senior level. Amen

i know. Ilias Chatzitheodoridis. What a name!

his nickname is illie Chatzitheodoridis

I had Chatzitheodoridis in my liver once, the doctor said it was due to a drinking problem.

It’s too hot for a coat.

I’d love to see how that fits across the back of a jersey. Do they use two lines and a hyphen for it?

Please don’t create problems for commentators, do you want them to bite their tongues?

Here is our Zelalem showing off some super smooth skills vs New Zealand in the U20 WC. At 6:30 he brings his defender to the ground with some daft direction change. His play reminds me of a poor man’s Cazorla. I would love to see him in the league cup next year.
https://youtu.be/LVX2tP1jWwY

Hummm. The force is strong with this one. Work on his physic is should. New ozil emerging, I see with this one

Should also see Zelalem’s and Akpom’s nutmegs for their respective U20 teams. Bright future indeed.

Fortune is one to watch out for…very talented. Happy we got him over manure.

Media naturally hardly mention him. Rather talk Greilish up when our equally young player had him in his pocket all match!

Next season, expect to see Gnabry!

Also Akpom will make a push.

Many laud Coquelin this season but in equal measure will dismiss Campbell or even the younger Sanogo. At that age, there is always propensity for progress (look at Walcott, Ramsey, Nasri, Fabregas who all came good around 23yrs). Ox and Jack if injury free will likely push forward this coming season too.

I was very impressed by Adelaide’s performance in the U17’s final against Germany – strong, fast, skillful. One to watch for the future!

I watched that U17 final as well and completely agree. Also I’m excited to see Wenger pay big fees for talented youngsters like Fortune/Adelaide/& Bielik when A. Jonker has such a great record of developing young players(As the head of Bayern Munich’s youth team years ago he helped develop Alaba/Kroos/& T. Muller << That Imo speaks for itself)

Well said Santori, people are quick to dismiss Campbell and Sanogo but like you say it’s a bit premature to make such judgements give the boys a chance and see what happens.