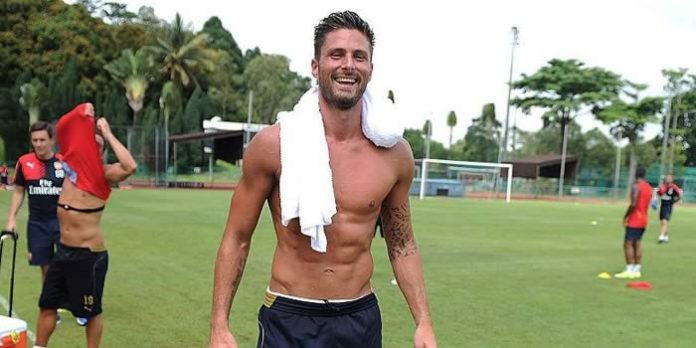 Arsenal have followed up on the appointments of Barry Solan as the new Strength and Conditioning coach, and James Haycock as Physio, with that of a Waxing Specialist.

Finnish specialist Mia Yaggi has a first class honours degree in Torso Aerodynamics from King’s College London, and has been brought in to ensure that players are capable of reaching their maximum speed in match situations.

The role was created specifically after the club hired consultants to advise on how the backroom staff could be supplemented, and one of the recommendations touched on the new skin-tight Puma kit and how that could impact a player’s sprint and acceleration speeds.

Arseblog News understands that all players will have their body hair, particularly that on the legs and chest, waxed off for the duration of the 2015/16 season.

That has been evidenced already on the tour to Singapore as Olivier Giroud displayed his taut, hairless physique on the training ground.

“It’s an unusual step to take,” said an insider, “but Arsene Wenger is looking to give his players even the smallest advantage on a match day and the players have certainly embraced it – especially Gabriel, for some reason.”

The first test of the new appointment’s work will come tomorrow night when a much less hairy Arsenal than last season take on a Singapore Select XI in the Barclay’s Asia Trophy.

Not sure if Arseblog is toying with us here…

But if it is a genuine appointment, I love that Wenger is looking for every possible advantage to make the HFB the V*HFB (Very*) and is trying and make our squad as good as it can possibly be.

Magnificent that we’re leaving no stone unturned in our quest for ultra-velocity. I’m surprised this article makes no mention of the aero-dynamic hair-cut – lift-off in two seconds and impervious to crosswinds – that is being pioneered by the Ox.

You clearly have much to learn about hairodynamics

Bless you blogs. Here I am falling all over myself trying to find who this fellow is only to find…..

Is this a joke?

never underestimate how gullible ppl are

Yeah, I heard they wrote it on your ceiling too.

Wow, I can’t believe it!

In other news, players’ wives said to be thrilled.

So if we play bad will Arsene tears trips off the players? :)))

Also we will be scoring shitloads of “Cranekick” goals , especially Daniel(welbeck)-San.
“No can defend”

On the sauce pre Midday again Blogs? Have a word

I’ve heard people waxing lyrical about this guy but I think it’s just a shaggy dog story myself!

This has to be a joke. lol.

Sac crack and back all around

Never in that order!

Let’s see how long it takes for the lazy sports hacks to get onto this and publish it as an “EXCLUSIVE” story.

so a half naked picture of Giroud has led Blog’s to channel his repressed sexuality to write this fantastic article.

I look forward to the article when a fully naked, pouty Giroud picture comes out!

Surely Gabriel is the one player who DOES want some body hair remain on him in the style of a runway..

I bet Arteta has a lot of hair, he must be in a lot of pain!

I did think of the gorgeous Mikkel when I read that. I would not mind waxing him thou!!

This is what we’ve been missing!

I was just about to say, that is most specific degree I’ve ever heard of.

Haha good one, Blogs. Almost got me 😉

Arsene must go!
Hiring a world class a waxing specialist. When the need for a worlo
d class stricker is so obvious!!

Well if we need one we should get one, though I’ve always wondered what a stricker does.

This story has legs. Nice shiny ones.

This is gonna end up on goal.com and Daily Mail..top bantz!

This is plucking good news. I hear this new guy really has the world at his veet!

Good to see we are embracing the Sky Cycling Teams ‘science of marginal gains’. It’s important actually. Google it and Dave Brailsford.

So the players are going to be waxed and have to wear skin tight shorts? I’m think I’m seeing the advantage Arsene is trying to give his team….

I also hear that in addition to waxing, Arsenal is working in collaboration with Shaolin Temple to increase sports performance via baldness.

until I read people’s comment before I realised I have being duped the second time.

You are kind of shapeless

These sort of signings are hair today and gone tomorrow!

This is why players love us, we go the extra mile to give the best facilities to players. I hope this new method can add a few yards to the speed of Walcott and Bellerin. I dont know of a single other club who has such modern facilties

WAX ON WAX OFF DANNY WELBECK-SAN!!!

Let us all take a moment to mourn Wilshere’s chest-hair-eagle. Saddest day of my life. Well, of this week, at least.

We don’t need a striker we have a stripper ☺️

The head hair should all come off. We need a squad of wet-shaved players to truly intimidate. Everyone including the manager should do it, except Steve Bould who should wear a wig made from Rosicky’s mullet.

Then get them barcode tattoo behind the head.. and give them #47.

This is totally uncalled for, because no matter how we belittle the role of hair in our body it remain a major component to the balance of players..
..in short ..it affects the over all aerodynamics of our players..just imagine our Coq becoming hairless…

Chelsea already do this

Not sure if trolling or i am just too stupid

Waiting for the Daily Fail and Metro EXCLUSIVE:

Can’t be arsed until Arsenal reveals his squad number.

I love it when Blogs is bored

What are all those lumps and bumps on Giroud’s arms and torso? I haven’t got any of those.

Will they grow on beer guts at all?

Chelsea are following the same philosophy. They have John “the Cunt” Terry doing “sand a floor” seeing that he spends so much time on his hands and knees when they play The Arsenal.