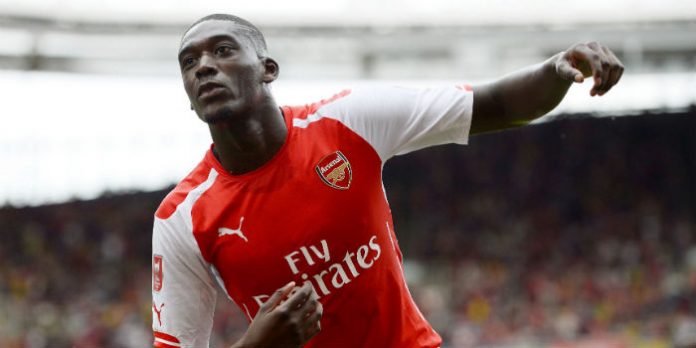 According to De Telegraaf, Yaya Sanogo has agreed to join Ajax on loan for the season.

The France under-21 international had been close to an agreement with French side Lille but was won over yesterday by a tour of the Dutch side’s training facilities with Director of Football (and ex-Gunner) Marc Overmars.

Sanogo is expected to be unveiled at the end of the week and will then join Frank de Boer’s first team training as Ajax prepare for the start of the Eredivisie season and a vital Champions League qualifier.

Arsene Wenger still harbours hopes the Auxerre academy graduate will make the grade in England, however, he has much to prove with only one goal in Gunners colours and a lacklustre spell at Crystal Palace under his belt.

Great move for Sanogo and Arsenal. They have a fantastic setup built around youth development and this will no doubt be a perfect platform for Sanogo to continue his progress.

Hopefully one season at Ajax will determine whether or not he is able to make the grade at Arsenal, be it at the end of the loan deal or in the short-term afterwards. I’m sure Wenger will make up his mind one way or another.

This miracle will take 1 year to bear fruit.

No-lose situation. Hope he step up.

who will turn down the chance to work with Arsenal legends.

Hope he has a successful season with them banging in more goals to raise his confidence level.

Miracles do happen and I am stern believer

Good luck to Yaya. Hope he steps up and grabs his chance working with DB10!

And if his loan works out, Arsenal may likely send other loanees there as well?

Does anyone know if other football clubs operate any kind of ‘foreign exchange programme’, so to speak? Think it would be fantastic to establish one with someone like Ajax or (despite my quite strong dislike for them as a club) Barca, send our yongsters over there for a month and theirs come here. If anyone’s going to do it in England I would’ve thought Wenger would be the ideal candidate.

Chelsea. The cunts outbid for prospects and send them to Vitese without ever giving them a chance.

Arsenal used to have something like that with Beveren

Indeed. Graham Stack learned his boxing skills there. Practicing on a fan!
https://www.youtube.com/watch?v=m2tyjacJPfU

I think both Eboue and Toure were there. I don’t know why it was terminated in the end.

Good luck to him. I think it’s a straight race between him and Chuba Akpom to see who develops quicker out on loan this season.

Gaining confidence at a higher level is such a huge thing for a young player, particularly a young striker.

For anyone doubting whether either will make it you only have to look at the distinctly average looking lanky kid who was only playing Europa cup cameos down the road for the scummers before Christmas.

A step forward for him. Lets not forget that it was Ajax and not Barcelona who rharoharabbrah hRAHR HARHA!! RAHHRAH RA!! FOOTBALL PASSY PASSY TECHNIQUELAS RAHH!!! TOTALLY!

We have to go deeper.

That is word for word what she said. Spooky.

My name is my name
Reply to  Juan Cornetto

And that is word for word what you actually said

God is Bergkamp, Bergkamp is God
Reply to  DreyKanmzs

Slow down there Jethro, one step at a time. Let’s get him a PL goal before we start talking about divine status.

Gutbukket Deffrolla
Reply to  God is Bergkamp, Bergkamp is God

If anyone can help Sanogo find form in front of goal it’s those guys.

The squad is in a healthy state, unlike a few years ago there is hardly any player now that we would like to see the back of.

The only one who is probably on the fringes is Flamini. He is not bad at all as a 3rd choice but DM is one position that could be improved on

Good move and good luck to yaya. I’m sure he has all the ingredients to be top stricker. In the last final against hull, he caused a lot of trouble to their defence freeing Giroud. One other thing DB10 and Overmars should work on though is his celebration. This cannot be emphasised anough.

Sanogo to return with the first touch of Bergkamp and the speed of Overmars. You heard it hear first!

my favourite comment! Thank you for that. But seriously, this guy has been scoring for fun at the U21 level. I hope people don’t forget that it takes some time to develop players. I’m from Canada, where most people follow hockey, baseball, and that football game where only 1 guy really uses his feet. Fans of these sports seem much more patient with prospects than footie fans. Sometimes it takes 5 years or more to develop a proper defenceman in hockey, but fans stay patient. Sanogo might be the next Giroud – a guy that needs some time to develop… Read more »

Bergkamp will forgive your sins, Yaya.

dennis bergkamp what a legend

It’s a good move for his development but I can’t see it being a move that will decide his future. Even if he went on to have a succesful season there would still be lots of questions. Players proving themselves in the Eredivisie have often failed in the Premier League.

It seems like there has been some weird bi-modal thing going on where the hottest players in the Eredivisie either become a great success or a complete disaster in the Premier League. For every Van Nistelrooy and Suarez there’s also a Mateja Kezman and a Afonso Alves.

And did I hear a Ryan Babble?

Sanogo to win the golden boot next season in Holland

He can go wherever he wants provided he learns to stay on his feet a lot more than he does at the moment (falls over quite too easily atimes).

God is Bergkamp, Bergkamp is God
Reply to  Man Manny

I actually take this as a positive decision. Passing up the familiar for a different challenge, particularly with the opportunity to work with some of the best in development (that just happen to be Arsenal legends), is a smart move by the boy. He’s got a long road, but this was the right step and not something to just pass as another place to play. PS this also gives him an opportunity to play in the CL too so definitely can’t hurt

I think a move to Germany would have proved more fruitful in terms of his fitness levels. Just look at Le Coq. All the same, when you work with legends, some of their qualities are bound to rub off on you. Good luck big guy.

For Arsene to set this up just goes to prove that he has enormous faith in him.

I am trying to share that faith but it’s not easy!

Good luck Ya ya.

Good luck to him. He gets to hang out with God and play Champions League football, provided they get through the qualifying rounds.
Not sure the Eredivisie is testing enough for him but hopefully he can make the technical progress he needs to there.

All the numpties calling judgement on Sanogo at this point. Simply idiotic.

He is still very young and can develop.

Considering Walcott, Ramsey, Coquelin, Nasri, Fabregas all did not reach potential till 23yrs +, I don’t get why people persistantly like to repeat the same mistake and negate a young player’s potential.

All the players you mentioned were better than sanogo is at this age.
Use a better example next time.

Some of the people writing Sanogo’s orbituary should also bear in mind names like Pogba, De Bruyne who were seen as flops by their respective big money clubs, sold and have developed into world sensations.

Do some thinking for once. Not everything can be store bought. We are a self built team. We build our own as well at Arsenal.;)

By Sir Alex Ferguson. Who, despite being an arrogant drunken red-nosed cunt, is generally considered to be a better judge of football talent than most others, including you.

What makes you lot experts then at Sanogo’s development?

Any of you predicted Coquelin’s rise?

Sanogo may be raw but he certainly has potential to be a good player.
Okay maybe I am biased because he was a wonderkid in my Football Manager game hah.
Seriously though, as a striker imho what he is lacking now is the intelligence part,
and DB10 seems like the kind of coach who can do something about that.

As a Dutchman, I take offence at the headline. It’s like an American website reporting “English press: Ozil to Juventus”, just because some idiot wrote so on the website of the Daily Mail.

Off course The Telegraaf can also report things that are true from time to time, but if they are the only source for something I would take that with a very big rain of salt.

We should loan them more players. It’s only a matter of time before they produce another world class talent (that we can buy) and it might help if we have a mutually beneficial relationship.