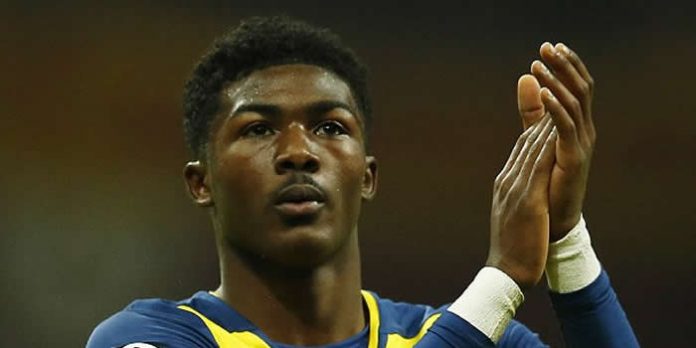 Arsenal have confirmed that Ainsley Maitland-Niles will spend next season on loan at Championship side Ipswich Town.

The England under-18 international made his Arsenal debut against Galatasaray in last season’s Champions League and has been tipped for a bright future at the Emirates after switching position from winger to midfielder.

He heads to Portman Road looking to gain further senior experience and with the hope of helping Mick McCarthy’s side bounce back from last season’s play-off disappointment when they lost over two legs to local rivals Norwich City.

Towards the end of last season Maitland-Niles found himself in the headlines following an unsavoury incident involving his mother. The teenager was given the full backing of Arsene Wenger who insisted his behaviour had been nothing but exemplary.

Good luck to Ainsley at Ipswich Town. And spare a thought for @ArsenalGent who already this week has bid farewell to Brandon Ormonde-Ottewill.

Please don’t take your mum, the Duchess, too.
She caused enough problems laying down ‘the Law’ at Arsenal’s training ground.

Pity we can’t loan her out instead.
There must be a club in the Faroe Islands willing to take her….

Good luck to the kid.
I’m not entirely sure I would trust Mick McCarthy with a pet rock,
let alone one of our players……..

McCarthy’s like Steve Bruce, in that he’s an excellent Championship manager who will likely get your team into the Premier League, but run out of ideas and prove out of their depth once they’re there. Kind of like a dog chasing a car. But he’s a solid enough manager, and should be a safe pair of hands for a young player learning their trade.

Well that sums that up!

YES. Brighter prospect than Bamford. Good luck in the Championship, and show them what you’re made of.

Also, he’ll be playing for a side who have won the league more recently than Sp*rs

Yes, but in black and white.

Before the first moon landing, the Beatles’ first single and the first Bond film is released.

As Wikipedia says (take a look at ‘1961 in the United Kingdom’) ‘Tottenham Hotspur win the Football League First Division for the second time, with a 2-1 win over Sheffield Wednesday. They have epically failed to win it since.[10]’

Come on dude, give credit if you’re gonna lift my material, I have a living to make.

Best of luck to him. A solid Championship loan would do him good. Especially if Ipswich are competing like they were last season.

Oh yea off topic but bloody hell i wish i was carla howe’s ring!… NO!, the one on her finger. Poor cashley hahaha

Next season needs to hurry the fuck up already.

From the reserves, I’m also rooting for Chuba Akpom to make it.