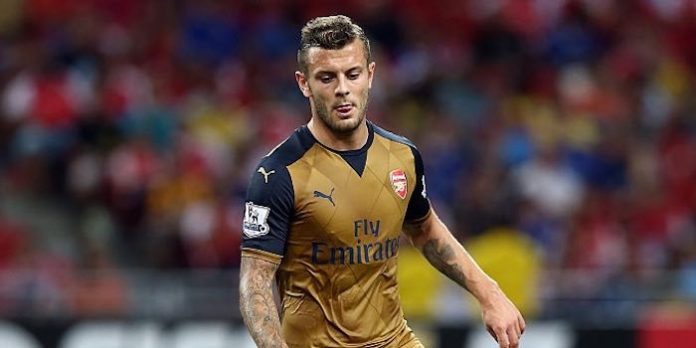 If you read the main blog this morning, you’ll have seen my take on the expected team news ahead of Monday’s game against Liverpool.

If not, I said, “My predictions: Welbeck still out, Wilshere still out but close, Rosicky obviously still out, hopefully no ill-effects from the game against Palace last week.”

Today, Arsene Wenger has released the latest info which is, “From the Palace game we have no injuries and we have still Wilshere, Welbeck and Rosicky to come back. And we have no suspensions. So we should have a similar squad for the Liverpool game.

“Rosicky is progressing nicely but he is far away. Wilshere should be the first back from those players, he is making good progress.”

So there you go then. It’s still so damn quiet that we had to post something, anything. We need something to keep ourselves occupied.

How about the old reliable, change ONE LETTER in TV series name to make an entirely new series. For example:

Seinfelt – Stand-up comedian does a show about fabric manufacturing business

Take it away in the comments …

Tons of Anarchy – The Chelsea squad, complete with Jose Mourinho, are locked in a window-less room which is then slowly filled with copies of the Sex Pistols song, Anarchy in the UK. Only once every person has admitted they’re a cunt can the floor be released beneath them. They get dropped into what appears to be searing hot lava thus prompting them to scream like banshees only for them to discover it’s out of date Tesco Value orangeade. John Terry and Jose, unbeknownst to each other, are actually tied together and are left to hang from the walls which… Read more »

Bongs of Praise –
Channelling Jesus through the mighty peace pipe

….I didn’t read the rules properly did I…

Boardwalk Umpire – From the beach to the crease, a tale of one boys desire to umpire.

The Big Bong Theory – stoners try to solve a world problem every episode only to forget what they were doing halfway through each episode. Generally speaking, hilarity ensues.

Vietnam combat er meds fight gruesome war conditions with Moroccan resin, a remnant of French Polynesian influence, and young NPH finds out he is gay for the first time. Potatoes.

You changed two letters. Ban him Blogs. No respect for the rules

If we´re allowed to change 2 letters I´m going with “Snatch of the Day”.

Sorry I forgot to explain this. Viewers send in pictures of their snatches to Gary and the team who provide their analysis. “Well Gary, the lack of grass on the pitch was definitely a factor”, after which there is a public vote where the best ones are displayed to the tune of Lightning Seeds Life of Riley. Remember note to vote on the re-run!

I will still vote #ssnhqsanchez or #goal8 no matter what.

Are the Brazilians still the best?

South Fark. The Pimpsons. And so on…

Breaking Sad – A recluse, who suffers with severe depression goes on a journey to find happiness.

breaking fad – a lonely young male from Ch*lsea tries not to a hipster wannabe cunt bucket like all those around him.

Surely TGSTEL ought to have his own show. Full ten seasons with a movie.

The Lion, The Bitch and the Wardrobe: Roger Cook returns for one final, special episode of the Cook Report, in which he goes in search of Walter Palmer, the infamous murderer of Cecil the lion, in order to bring him to account for his actions with some hard hitting questions. Mr Palmer is eventually located hiding in a wardrobe in the Longwell Green branch of DFS*.

well seems no one is up for the challenge so here goes
THE MIXER: tales of a mixer in a confectioner shop which solves all problems that arise
Hawaii Five – 1 when the criminals strike one back

Tottenham are such shit that they only count as one letter, so how about Hawaii Five-0 Tottenham?

Came here for this. You have won the day.
To the top with you.

It’s been a long day

Only Foods and Horses – a documentary series on the horsemeat scandal.

You just got thumbed down for praising another person´s contribution, yet the contribution itself doesn´t have a thumbs down!

Thank you ever so much for imparting your wisdom, kind sir. It would have taken years for one such as myself to have figured that out alone. Truly I say, your knowledge knows no bounds.

Just find it bizarre that a comment that says “excellent” has 7 thumbs down. What´s to hate? Although you seem like a bit of a hater

Weep Show – A candid look at the most annoying crying faces of all time (i.e. Toby Macguire) :
http://4.bp.blogspot.com/-ouXknmJ6KWc/UMN4lkpqS2I/AAAAAAAADzc/j0CycdRQx4M/s1600/tobey-maguire-crying.jpg

Phil Jones would win this will all the grimace faces he makes over the course of ninety minutes.
He would come first, second and third. And the judges wouldn’t even know.

The Gig Bang Theory – A group of MIT nerdy scientists go on tour popular metal band Slipknot in an attempt to create the perfect mosh pit.

The Big Gang Theory – Roller-skate wielding hoods battle to garner support for their theories on the origin of the universe across a dystopian Pasadena.

Neighbears….. where some russian cunt sells some dodgy shit to his neighbours.

Well I fucked that up…

BREAKING BID – A round up of the weeks most ridiculous transfer rumours.

Or ‘The Big Fang Theory’ – following the comings and goings in an average vampire’s dentist surgery.

Breaking Fad – Story of Walter and Jessi not giving a fuck about stupid trends.

Don’t smell the bride – A one off special of Blind date. A man must choose between 3 women based on their answers to his questions and is contractually obliged to marry one. Little does he know, they all reek.

Holtby City – a six-part drama about the vile ghetto where failed Spurs signings are forced to live.

Shitwrecked – 12 contestants are dumped on a desert island with nothing but a week’s supply of vindaloo and Monster energy drink. Their only chance of survival is building a life raft from their own feaces…

Or alternatively, the fate of Tottenham once they move into their toilet bowl stadium.

BareDevil – Story of a ugly superhero, who scares away villains by baring it all

Mad Hen – we experience the ’60s through the eyes of an alcoholic, philandering chicken who is an advertising genius

My Shame is Earl – A man called Randy has a speaking growth (ala Quaid from Total Recall) he tries to keep hidden but ends up running his life and stealing his girlfriend.

My Game is Earl – A man called Randy travels to Vegas to try and sell his wacky new table game. Comedy ensues.

Dull House – A series about a boring family in San Francisco were absolutely nothing happens.

True Defective – A couple of repairmen go about fixing all the shoddy appliances uncaring manufacturers have released to the public.

‘Strictly Come Lancing’- Frenetic Saturday night entertainment where 12 celebrities compete to show off their boil pricking talents. Three expert judges give points based on accuracy, sanitation and amount of pus.

If it was celebrities battling Knights on horses, I’d be there.

By the Eyes of Özil

Crappy Days:
A 40 something year old guy who tries to be a teenager and lives above the teenagers parents in a attempt to have a relationship with the daughter.

Mouse.
A show about an angry Mouse with a limp and a cheese adiction slowly alienating and driving all of his friends away.

The Walking Deaf – nobody can hear the zombies coming

Come to Harrogate on a weekday afternoon, when the old dears are out shopping. You could let off a small nuclear weapon and they wouldn’t notice, bless ’em. You can have the full-on walking deaf experience. 😉

The Brady Lunch – Cooking show with far too many cooks.

Honk: A genius detective whose obsessive compulsive disorder is manifested by him shouting at clouds whenever someone honks their car horn.

Once Upon a Lime – Tequila fuelled fairy tale adventures

True Defective – A odd bunch of repairmen race against the clock to fix shoddy appliances claiming lives across the city. Which city, you ask? My city. Or yours.

trailer park roys – hodgson and keane team up in this mockumentary about life in the park, growing dope, and staying out of trouble

The Great British Rake Off. Paul Hollywood and Mary Berry are called in to judge the merits of Britain’s best aspiring gardeners.

Dammit I was too slow!

‘Being: Liverpoo.’ A hard hitting documentary on Brendan Rodger’s management style. (‘.’ counts as a letter!)

This is my favourite!

“come fine with me”: a gaggle of traffic wardens take turns to demonstrate their fining prowess and regularly criticise each other for buying their uniforms from the shop instead of hand stitching them.

Snatch of the Day. Switch to the 900 channels around the same time of day for an idea.

Would the person who caught them be holding them upside down by their ankles?

The Rire – Like The Wire but set in Japan

Antiques Woadshow – Like Antiques Roadshow but narrated by Roy Hodgson

Rex & the city – About Gunnersaurus & friends (all mascots, of course) hip, but dramatic, life on the dating scene.

Mad Ben – Benik Afobe is back with a vengeance Creaking Bad – A horror series about a killer named Diabi whose limbs and various joints make a signature sound while haunting the club medical wing Sz (From HBO’s Oz, pronounced “szczez”) – The story of a prisoner who repeatedly gets sent into solitary for smuggling cigarettes into the shower Better Call Paul – After a massive wave of injuries and illnesses, a desperate Arsene Wenger recalls 47-year-old Paul Merson to the squad, hilarity ensues Dome Improvement – A documentary series about how so many Arsenal players maintain such spectacular… Read more »

a show where the speed of food preparation is the only measure of success. The fastest chef wins.

Okay,so it’s 2 letters but I’d really like to see:

This website uses cookies to improve your experience while you navigate through the website. Out of these, the cookies that are categorized as necessary are stored on your browser as they are essential for the working of basic functionalities of the website. We also use third-party cookies that help us analyze and understand how you use this website. These cookies will be stored in your browser only with your consent. You also have the option to opt-out of these cookies. But opting out of some of these cookies may affect your browsing experience.
Necessary Always Enabled
Necessary cookies are absolutely essential for the website to function properly. These cookies ensure basic functionalities and security features of the website, anonymously.
Functional
Functional cookies help to perform certain functionalities like sharing the content of the website on social media platforms, collect feedbacks, and other third-party features.
Performance
Performance cookies are used to understand and analyze the key performance indexes of the website which helps in delivering a better user experience for the visitors.
Analytics
Analytical cookies are used to understand how visitors interact with the website. These cookies help provide information on metrics the number of visitors, bounce rate, traffic source, etc.
Advertisement
Advertisement cookies are used to provide visitors with relevant ads and marketing campaigns. These cookies track visitors across websites and collect information to provide customized ads.
Others
Other uncategorized cookies are those that are being analyzed and have not been classified into a category as yet.
SAVE & ACCEPT
wpDiscuz
265
0
Would love your thoughts, please comment.x
()
x
| Reply