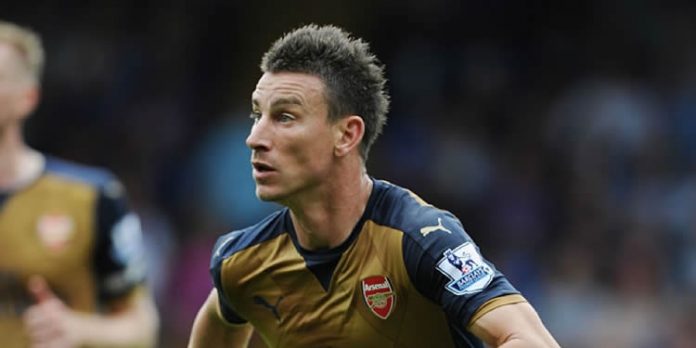 The reporters on the Arsenal beat, including John Cross in the Mirror and Jeremy Wilson in the Telegraph, are suggesting that Laurent Koscielny won’t recover in time for this weekend’s game against Newcastle.

The French international missed the 0-0 draw with a back strain, a problem compounded by the absence of Per Mertesacker with illness.

It was the first time Arsene Wenger was without both of them at the same time since March 2012, a game against Wigan that Arsenal lost 2-1.

Mertesacker, however, is likely to be available again and should line-up alongside Gabriel who had a good display against the Mugsmashers.

Meanwhile, Calum Chambers, who had a more difficult night against the side managed by evil clown shark teeth, was full of praise for Petr Cech who is imparting his wisdom on the training ground.

“It’s good to train with him,” he said. “He’s always talking to me and helping me to improve my game, which is really useful.

“In training he’ll come up to me during the session or after the session and say, ‘This was good, you could maybe do this or try this’.

“It’s always great to have someone who can help you.”

Per Gabriel, of Genesis fame

Cech is so useful for the team

Not as useful as a massive fucking striker, though…

Crouch? That poor fucker probably has a negative BMI.

Isn’t it nice to be in a situation where an injured player doesn’t have to be rushed back, bliss. We just need to work on the pesky goals front now….

God is Bergkamp, Bergkamp is God
Reply to  Daft Aider

It’s nice to be able to cope for a player’s absence with a player for said position. A year ago, Mertecielny both out would have have sent us into bedlam. Now, I won’t say that Chambriel was as successful Monday, but for a 2nd string set against a potential top 6 squad, I was pleased, certainly at least with the second half.

I thought Gabriel was very good last night. We’ll be good against the Magpies

agreed. Mert and Gab will be a fine pairing!

It’s up top that needs to start clicking a bit. Do we shuffle it up a bit? A Wilshere/Welbeck or even Rosicky would be great right now. We are trying to pass around the opponent instead of dribbling and driving through.

Is our game actually on a Saturday for once?

Yeh, 12:45 KO.. If anyone knows a decent bar in Edinburgh that will have it on I could do with suggestions. On a stag do up there and my mates are all from Newcastle. Should be fun.

The Frankenstein bar in royal mile is really good and entertaining

Every week someone states, we will be good in our next game and every week we are still waiting!!

How long before we get the news that ‘the injury is worse than expected & he will be out for a minimum of 3 months’…!!

Time for me to hastily retrieve my coat perhaps.

Mertegab should be a decent centre half pairing.
After watching last nights game, I think Cechbers needs slightly more work.

Shades of last season anyone?

Except thankfully it’s a back injury, which is much more treatable than an Achilles…

This year we took record time to get rid of annoying stuff like the title race and focus on priorities like screwing up the first half of the season to set up heroics in the 2nd half. Nice.

This year you took record time to throw toys out of pram 3 games into a season with a mere 35 to play.

This year, you took record time to say the same old rubbish that you said last year. Let me guess, “The team just needs one more year to gel?”

Upvoted for the optimism. Just for the record, others are not going to lift off the gas till May

This could be the transfer merry go round we were thinking could happen but not exactly what we hoped. Koscielny is a world class CB. Now Real or PSG might be in for him.

Gabriel is great .. only has a slight problem when a long ball lands in between him and the attacker(bouncing ball)

Arseblog, did you call for me?
because when you do, i unleash balotelli. oh, where is balotelli anyway?

I had a nightmare last night where Koscielny was playing for United, just remembered it when I saw this post and saw him in our jersey. What a relief. Phew!

Did someone call for me?

So Gabriel’s gonna start 2 games in a row.

Quality comment.. Think it went over most peoples heads though mate

Chambers to start in place of Kos for me.
Cue thumbs down.

Also, does anyone think this ‘back injury’ could have anything to do with the goals we conceded at West Ham and Palace? Wouldn’t be v Wenger though if that’s the case I guess. Although if he has dropped Kos for poor performance this would be one way of doing it without causing a media/fan meltdown maybe..?

It could be that he had back issues in the previous 2 games and aggravated it in training.
But he wouldn’t be dropped if BFG isn’t playing.

Let s all understand that Wenger has become both negligent and complacent as somebody rightly pointed out. Signings like Giroud cannot be good enough for a title challenge. Thankfully Sanchez and Cech arrived, but only because they wanted to be in London! Schneiderlin was keen on coming to Arsenal and instead Wenger let him go to United. Not good enough, like the past 10 years!! Wenger is bot the same, needs to be changed.

Schneiderlin wanted the Spuds before he ended up at Yanited for more money, he was never keen to come to Arsenal. Probably why we passed on him.

Looks like Wenger is about to pull one out of his Arse, reports suggest he’s about to sign Francis Coquelin’s younger brother Alex Kokorin. Let’s hope he’s as bad*** as his brother

Yeah, buying that Schneiderlin bloke would have sorted the Giroud issue!…………

Yeah buying a an upgrade to Giroud would have sorted the Wenger issue!………..

The injury gods have started mischief making again. This time with the defense….God only knows when this will come to an end. We need a fully fit squad to even think of competing.

Mr Wenger, can we get a DM and a Striker please. We seriously need to score more to compensate for the weakness in defense.

Ha! The injury curse is striking earlier than i expected. Seems to be particularly fond of our players. Here is to hoping that shad mojo is on overload