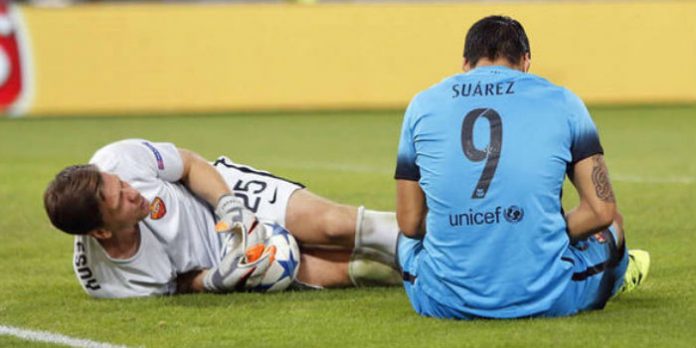 Wojciech Szczesny is facing up to six weeks on the sidelines after dislocating his finger in last night’s 1-1 draw between AS Roma and Barcelona.

The Polish international was injured during a collision with Luis Suarez and today underwent scans that revealed the full extent of the problem. Not only had his finger been racially abused it was also banjaxed.

It’s feared the 25-year-old could miss as many as ten games including two Champions League games and Serie A showdowns with the likes of Sampdoria, Fiorentina and Inter.

The Arsenal number 1 has been enjoying his loan spell in the Italian capital in recent weeks turning heads with match-winning saves against Juventus and Frosinone.

The Arsenal medical team again! Didn’t do their job last season. Heard even Vermalaen is on an injury hangover.
On a serious note, I am gutted for him. He slotted into the Roma backline and was keeping every game. That consistent game time would do him a world of good.

He’s been having amazing performances for Roma. Really eye catching stuff. Been the best keeper so for of the early season.

You can take the player out of Arsenal, but you can’t take Arsenal out of the player…

On a more serious note, wish him a speedy recovery, great to see him seemingly getting his head together and starting to deliver on his considerable potential.

Suarez did get a big gloved slap out of it though so it wasn’t all bad.

Oh I do wish I could edit that 🙁

Arseblog had a chance, and he took it with both hands.

Its a shame. He was on a good run of form. Would have done him good. I still think he’s our number 1 when Cech retires.

It’s not the “Arsenal curse” or anything like that. He got kicked deliberately by Suarez. 1st kick was to try and get the ball, 2nd one was clearly to hurt Woj. Might be a worldie striker but such disgusting behavior on the pitch at times. Can’t wait for Gabriel to dominate another disgusting striker on Saturday.

I hope it’s not the hand he smokes with

I’ve always wondered what our attitude to Suarez’s temparement would have like had he signed for us a couple seasons back.

Probably would have spent the whole time injured before leaving for Barcelona and we’d never get a chance to see.

Wojciech, May the curse be with you.

He’s lucky the vicious little **** didn’t bite it off!

Have they checked his fingers for bite marks? Once a bitten / biting and all that…

Six weeks for a dislocated finger is a really long time, have dislocated a few fingers (playing basketball, american football and football) and never took more than a few weeks max to fully heal and some were really out of place.

Yeah that’s true. I’ve done my fingers playing basketball too. Think i was playing again within 2 weeks. (might not be the smartest thing, my fingers still hurt even tho it’s been almost 15 years)

Imagine pulling off a finger tip save on a 100mph shot? With that half-healed finger?