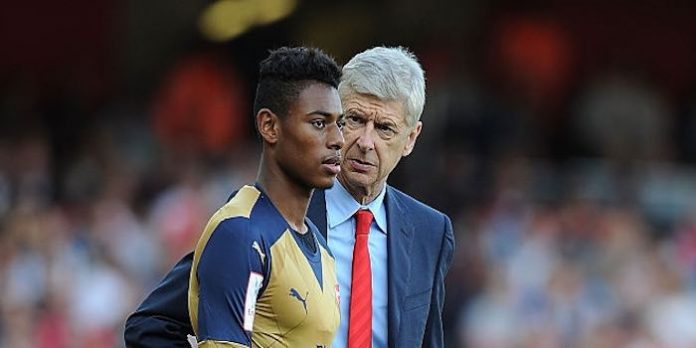 Our resident youth expert, Jeorge Bird, reports today that Jeff ‘The Jeff’ Reine-Adelaide is facing two months on the sidelines having picked up an injury playing for Arsenal’s under-21s against Newcastle.

The 17-year-old, who signed from Lens in the summer, was promoted to the Gunners first team squad following his impressive cameos in pre-season and had been penciled in for a possible competitive debut in tomorrow night’s Capital One Cup game with Sp*rs.

News of Arsene Wenger’s squad for the trip to White Hart Lane has yet to filter through, but you’d imagine after two defeats in a week he’ll turn to more experienced first teamers to do the job with a smattering of youngsters as options from the bench.

Is this Peak Arsenal?

We really are Arsenaling at the moment

Quick and speedy recovery for the boy. Next season they won’t what hit them when physically stronger Jeff will be set upon them

Who’s they? The arsenal medical team?

I was looking forward to seeing him run the sp*r’s midfield ragged! Oh well.

Please can he be given a brand new room? Prefarably as away from those regular visitors as possible. Thanks.

Pass debuchy from the left hand side

Time to throw in the towel lads. The season’s over.

Well this season may as well be over for us then.

Till JEFF do us part! well someone one had to say it.

Completely off topic so I apologise but I just cannot understand why people are saying Garth fucking Crooks is completely right about what he said the other day. Yes Gabriel should not have been sent off for raising his leg and maybe tapping Costa (straight red what a fucking joke). But no! How could anyone look at Costa’s behaviour and not be outraged that he didn’t get sent off? Crooks said that no one would be up in arms if both men stayed on the pitch. I was furious that Costa was still on the pitch before Gabriel was sent… Read more »

Rant over. As you can tell I am still fuming about the whole situation

The worse thing about Dean’s handling of the situation was that Costa got his yellow for the handbags with Gabriel. He allegedly didn’t see his assault on Koscielny which went totally unpunished.

Well then, playing Dean’s advocate, if Dean didn’t see the Koscielny incident (which is what the FA claim), why would Costa deserve Red? He was egging him on and being an utter twat but nothing that Dean saw warranted a red for Costa, imo. His major mistake was not taking his time with the situation. Giving Gabriel a straight red is completely insane. Maybe actually taking the time to consult the other officials would have shed light on what Costa did to Koss. However, Costa did very blatantly slap Gabriel in the back roughly twice, right in front of Dean.… Read more »

I like your thinking, best to get the 6 month injury initiation process outta the way now rather than later 😉

I just realised something and it bothered me a lot. I wasn’t shocked or even mildly surprised after seeing this bit of news. Seemed very “arsenal” to me about a young talent being sidelined for two months. Or may be I am still reeling from our defeat to Chelsea and have become numb to feel anything else.
P.S : Mike Dean, Costa, Fabregas, Chelsea are all shit. And FA too if they give Gabriel more punishment.

Though true, you keep such things to yourself. You don’t go about yammering about it. you just don’t! see what has now happened?? this one is on you blogs!

That is too bad as this match tomorrow would have been a good chance for him to get some time (maybe not start, but possibly a sub appearance was in the cards for him) with the first team. Now that is not likely this year for him.

no-one seems to remember Costas charge into the Ox off the ball. – was he trying to get him sent off too? Another incident that went undetected by Mike Dean and the other officials. It’s very clear that Mourinho likes this style of player-the intimidating sort. What a way to win the Pl!

When he comes back in January, it will be like a new signing.