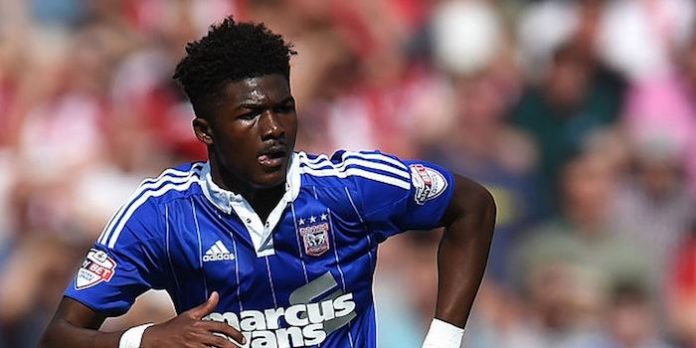 Despite the fact that he has already featured in the Premier League, the Champions League and the FA Cup, Ainsley Maitland-Niles hasn’t quite received the same level of hype as many of his fellow Arsenal youngsters.

That trend has extended to this season, with Maitland-Niles going diligently about his work at Championship side Ipswich Town, where he is steadily improving under the tutelage of Mick McCarthy.

To feature prominently in the Championship at the age of 18- Maitland-Niles has played in all of Ipswich’s league fixtures so far- is a sure sign that your development is on track, and the England youth international has been earning rave reviews from the Portman Road faithful.

His adaptability is also one of his key assets. Maitland-Niles was a winger when he broke into Arsenal’s U18 team, but was deployed almost exclusively as a central-midfielder at youth level last season, to much success.

This campaign, the youngster has been mainly used on the right wing for Ipswich, although he has occasionally featured on the left, but, wherever he plays, his enthusiasm for the game is always evident.

Quick, a good passer and capable of shooting from distance, Maitland-Niles has long been highly regarded amongst the club’s coaching staff at youth level, but it is only really in the past couple of seasons that his talent has become more obvious to a wider audience.

Maitland-Niles featured in the NextGen Series, an U19 European tournament that was the precursor to the UEFA Youth League, when he was 15. He then went on to break into the Arsenal U21 team as a first-year scholar and, during his second year as a full time player, was involved with Arsene Wenger’s squad on several occasions last season.

Now he is taking another crucial step in his development and will return to Arsenal in the summer an even better player.

It may still be too early at that juncture for Maitland-Niles to be deemed ready to challenge for a place in the first-team squad, with another loan deal a possibility, but his rapid progress won’t be able to be ignored for too long.

Guessing which youngsters will make the grade at Arsenal is always an extremely difficult task, with so many variables to take into consideration, but with Maitland-Niles it is very hard to envisage him ever becoming over-confident.

Instead, he appears very much to be a player who is willing to keep on learning and who isn’t afraid to try different things and make mistakes.

His name may not be the first to come mind when you think of Arsenal’s greatest talents, but Maitland-Niles is continuing to develop prominently and it seems highly unlikely that those aforementioned first-team appearances he made last season won’t be added to at some point.

Good experience for the lad. Hopefully more and more of them will come through to be first team regulars.

Already famous for a historic double-barreled sub-swap with the Ox – the poshest substitution ever 🙂
https://twitter.com/angryofn5/status/544784490212909056

Which is also wrong. Lee is Young-Pyo’s last name, Young-Pyo is his first name, it’s just an awkward anglicization, since last names come first in Korean, and first names are (typically) two syllables. So technically Maitland-Niles for Oxlade was the first!

he should b playing 4 oxford or cambridge with that monika

He’s recovering from a groin injury last I checked.

He’s done well at centre-back for the U21s.

While we’re done my this, and I’m serious here, how’s Isaac Hayden doing?

*While we’re doing this

JeorgeBird
Author
Reply to  Me So Hornsey

Started off well at Hull, but hasn’t been a regular for them lately.

Scott P
Reply to  Me So Hornsey

See, that’s what happens when you turn it off 😉

Wow thought Sanogo would have done well… Yeah Isaac Hyden hasn’t been starting regularly of late. I wonder why.

I tried to find out, and it seems like Hull had some people unavailable early in the season which gave him some playing time, and right now he just isn’t their first choice, and possibly not even second choice. Apparently they were also expecting some departures at the end of the transfer window which didn’t happen, so they have a rather large squad. All in all, it doesn’t sound ideal for Hayden, despite the fact that he played well for Hull at the start of the season.

Until he can do it at Stoke on a rainy,cold Tuesday night then we can big him up?

Pass debuchy from the left hand side

has AMN’s mother calmed down yet, and will her antics have any long term influence on his AFC career

Was that his mom? I had this memory it was someone else’s mom.

Thanks @JeorgeBird for this constant updates on the younger talents of the club. Please keep it up

Maitland-Niles, Chris Willock and Gedion seem like certainties to become stars. I only knew Maitland-Niles last season and thought he was only capable of playing as a holding midfielder but he has really played well this season. I have tried to catch every championship game that features arsenal Loanees. I have tried not to miss a single game he plays in and his performances have been the main reason I prioritize his games over others. I was disappointed that he didn’t play against Man United, is there a reason behind him not playing because he has been their best player… Read more »