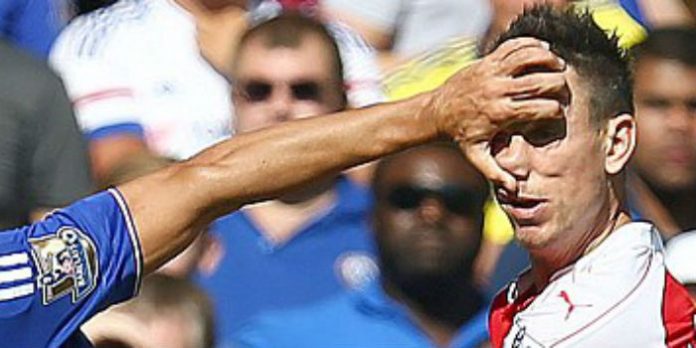 Laurent Koscielny says the experience he’s gained playing football at the highest level helped him stay calm in the face of Diego Costa’s antics against Arsenal earlier in the season.

The Frenchman refused to react to the Spain striker’s shoving and swinging elbows when the Gunners travelled to Stamford Bridge back in September only for teammate Gabriel to fall into the Chelsea man’s trap.

Reflecting on the incident, Koscielny revealed he’d received many messages from friends suggesting he should have sparked out the attacker.

“At the time, when he gives me a slap on the face, I don’t pay attention. We’re in a defensive situation and I continue to play. After he pushes me, I fall and get up because I’m not the type of player who drops down like that.

“Sure, I could have had a reaction, but I managed to keep my nerves. He wants to blow a defender’s fuse but you have to stay calm.”

“I received a lot of messages telling me: ‘Well done, because I, I would have hit him.’

“You know, it’s five years that I’ve been at Arsenal, I have over two hundred matches with my team, some very important, I played a World Cup, the Euros. All this experience helps my serenity and allows me to not be overwhelmed by the emotions of an encounter.”

Koscielny is currently away on international duty with France and he also touched on how he feels increasingly comfortable with his position as a mainstay in Didier Deschamps’ squad even though his style doesn’t echo classic leader-like qualities.

“It will be for four years now, nearly five that I have been selected for the French national team,” he told L’Equipe.

“I am used to the French national team. I know all the players, better and better.

“Aside from that, I am quite a reserved person. I am not a natural leader. Like others might be in the dressing room.

“Like Hugo [Lloris] or Pat [Evra]. It is more through my actions on the pitch that I can lead, that gives me a certain legitimacy. Like I have at Arsenal.”

I love you Kos, but you can always slap Costa in the face when he tries to get out of your pocket.

Dear Kos, you have that certain legitimacy. That’s why you are the boss. On the other hand, slapping Costa would have given you another type of legitimacy. Just ask Gabriel. He’s fast becoming a fan favourite.

it’s not boxing or MMA. If you think Gabriel is more of a fan favourite than Kos then we must hang out with different fans 🙂

I certainly hope that was not what I implied. lol.

Looking at the photo, my hatred for that Costa Cunt boils over… He’s trying to gauge Lolo’s eyes as well as slap him in the face. What a cunt. No wonder he fits in so well in Fulham.

Yep, I would have lamped the cunt.

I’m amazed he just got back up rather than staying down when he was bumped over. Would have been sensible to point out what Costa had done and might have got Costa a booking or sending off, making him less likely to continue being a tw*t. It is possible to be too nice.

Top player, very happy we have him in the prime of his career.

Exactly. Thankfully Kos is a better defender, player and professional than I will ever be.

“Kos is a better defender, player and professional than I will ever be.”

Costa to Mike Dean when handing over the “with thanks from Chelsea envelope” after the Chelsea – Arsenal game.

The Arse in the Gamb
Reply to  Pedant

You have to play the game and let the refs see, anything else puts you at risk, Kos was a star on the day and Gab a fool. Both Moureen and Decosta have been found out since – you can’t help feel that Deosta, Oscar and the rest have been encouraged to be dirty. Maureen deserves what he is suffering for how he supported Decosta’s behaviour after the match.

Mpls
Reply to  The Arse in the Gamb

Gab’s situation was obviously not ideal, Costa won the match with it – and a little help from his friend Dean. But in the end the light was shone on Costa and Mou, and it hasn’t let up since. This is exactly what in the end (hopefully sooner in the future) needs to happen, because for far too long Costa was just allowed to do these things and for some twisted reason it’s just passed off with a chuckle and ‘that’s just his game’. Kind of an ‘Oh, that Scholesey, he’s not a very good tackler you know’ type situation.… Read more »

Whaaaat
Reply to  The Arse in the Gamb

I’m pleased that Kos is able to focus on the game and ignoring the antics.

At the same time, it would be really nice if there are one or two canny players in our team, who can wind up such hot heads and make them play at less than their efficient levels (of course in Costa’s he is doing it to himself right now).

And booted EBJT just for the sake of it.

Costa acts tough when he can hide behind the ref’s back. Square up to the cunt when it’s one on one and he’ll shit his pants. I imagine a scenario after the game where Costa is spotted on his own by BFG, HFB, Flam and Favella Boy. Upon seeing them he decides to leg it. Just like the cowardly bully boy cunt he is. Costa is a cunt who is managed by a cunt. He plays for a team of cunts and on the day he was protected by a cunt. Rarely has such levels of cuntery been seen, heard,… Read more »

3 points is the best revenge

Yes, but we didn’t get the three points, Chelsea did. If we have got a draw or a win we would be unbeaten since the first match of the season and top of the league.

I’m still bitter about Mike Dean, why has no action been taken about him directly or about the result of the match, which was distorted by his (wrong, per the FA) decisions?

Mike Dean is an embarrassment to refereeing.

He is good at dancing though (to celebrate Tottenham scoring).

The really interesting thing will be to see if he ever refs one of our games again. He really shouldn’t, certainly not against Chelsea or Sp*rs given his history.

And that ladies and gents is why we call him Boscielny!

Such an assured and confident answer which also stands for who he is as a player. Easily considered as one of, if not the best CB in the league. I love you Laurent. Stud player, stud man. I hope the boss plays out the rest of his career with us. Such a backroom Bosscielny. Very defender, much CB.

Who thumped this down?!?

The Boss does not give a shite about Costa Coffee.

If you love defending you love Koscielny

You know a national team won’t win a tournament on its soil when the coach doesn’t know who to choose between Koscielny, Sakho, and Mangala… Really?

Captain of A.F.C. in a year or two when Merts and Arteta have left

Mert is only a year old than Kos.

If they could manage to stop arguing, striking and blackmailing each other for one tournament, France would have one hell of a team!

Best photo for an article I have ever seen.

Legitimacy of leadership through actions. Powerful words. So impressive!

Love the picture. No need to pay attention to the cunt, even if he has his hand on my forhead in a game of football, as if to feel if I’m well.

Kos seems to be the stone cold killer kind. Wouldn’t surprise me to see Costa suddenly flying into the goalpost after a cheeky little shove. Either that or Gabriel kicks him up in the air.

Look, I don’t have much time for the Orcs, but I found the Shawcross/Costa stuff funny.
Apparently the pathetic Costa referred to Shawcross ( in his ear all day) as being a smelly, BO ridden stinkbomb.
Shawcross posts a pic of himself the next day, with a deodorant of some kind………
Costa is just becoming a joke and is doomed already.

Costa is the Joffrey Lannister of football.

Kos, Mert, Gab, and Coquelin are all getting unwashed kits and are banned from showering for 2 days for the rematch.

Shawcross is a cunt. Now that the obvious is out of the way, I did enjoy his comment about Costa not being hard at all. If he doesn’t get under the skin of the defender, well, he has nothing at all. Just a cunt with a pair of boots.

There wasn’t really space in the team with Vermaelen cemented there as captain, and WHAM! Boscielny comes in! The best defender in the World without a doubt. Doesn’t matter what your name is, you’re up against Koscielny, and you’re in his pocket for the match. Can be Drogba, Messi, Ronaldo, Lewandowski… Doesn’t matter, you’re only gonna end up in his pocket. I must say, I commend the strikers for even attempting to play against Koscielny. Courageous.

Best defender I’ve ever seen, and he should be getting nominations for the Ballon’dor. He’s fucking amazing.

Part of me wishes Gabriel hadn’t reacted and stayed on, since we might have gotten something out of that game. But seeing how it’s actually transpired (joint top, Gabriel ban overturned, Costa ban, leading to Mourinho mouthing off and setting off a chain of events leading to his ban, and Chelsea form false-dawned by “beating” us), I’m actually kind of satisfied.

Credit to everyone here too; I feared Gab would be vilified for playing into Costa’s hands, but that never happened.

Totally agree with you, but I was also happy to see Gabriel stick up for his colleague. Team fights together.

I love how he says that he is not a “natural leader. Like others might be in the dressing room.” Well, he is certainly a leader on the pitch.

Top top player. And people talk about Arsenal not having any steel. Come on Arsenal!

BFG,Boscielny and Gabriel are becoming one hell of a unit.

What a class act this guy is.

‘Costa is a cunt who is managed by a cunt. He plays for a team of cunts and on the day he was protected by a cunt. Rarely has such levels of cuntery been seen, heard, felt or smelt before or since.’

I called it then and will call it now… That “3 points” was the last that Chelski would ever Nick. Their manager openly applauded rowdy behaviour now chickens have come back to roost – he should have written that game off as a Dean clanger but he went for the hills with it, one of his ‘masterclass’ acts. Well let’s see you masterclass your way out of the mess since then. Incredible!