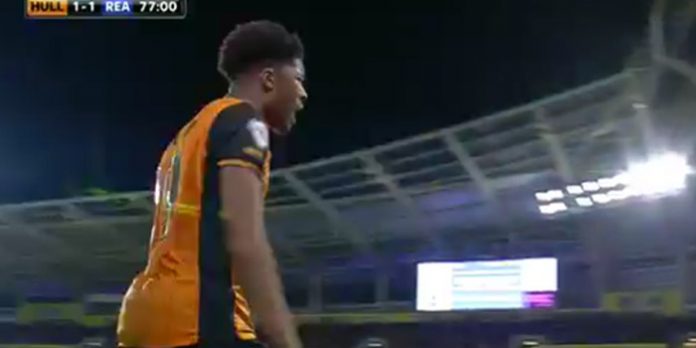 Chuba Akpom has apologised for his tantrum last night when he threw his gloves off in a huff, having been taken off during Hull’s 2-1 win at Reading.

With the scores 1-1 at the time, the on-loan Arsenal striker reacted poorly the decision by Steve Bruce, but afterwards said via his Twitter account, “Hard fought win tonight. Let a lot of people down with my reaction, sorry to the fans, staff and club.

“Emotions got the better of me.”

Bruce didn’t mince his words after the game though, slamming the behaviour of the 20 year old.

“I’ve been in the game long enough to understand emotions run high and sometimes you make a complete fool of yourself,” he said.

“I’ve had World Cup winners throw their gloves at me. Then I take a bit of notice. I’m not going to take notice of a 20-year-old who, unfortunately, when things don’t go his way spits his dummy out and throws his toys out of the pram.”

It does sound like he’s in for some disciplinary action, but that’s part of the learning process, and the loan at Hull to develop him as a player and a person.

Bruce continued, “I will deal with it in a way I think I should. He’s got that little edge which all good players have got, but you have to control that.”

Let’s hope the talented glover-chucker learns his lesson and works hard to make up for what was rather silly behaviour.

Be pissed off, just not in front of everyone. And think why you were taken off and improve your performance in light of that.

and Mourinho was just sacked!!!

Kinda bummed Wenger didn’t get another chance to beat him in the league. Fucking Mike Dean.

Petey B
Reply to  Geo_Arse

Definitely sad he didn’t last longer. People recon it takes 10,000 hours practice to become a specialist and unfortunately his failure hasn’t lasted quite that

Yes, yes it’s nice and all that. But he was always going to get sacked eventually.

I was hoping for Chelsea’s misery to be protracted all the way to the end of the season. Match-by-match. Interview-by-interview.

Now I feel cheated out of a series of high-profile and well-deserved theatrical meltdowns.

Call me old-fashioned, but given what a pile of festering hedgehog shit Mourinho is this hardly feels like justice.

Awaiting suggestions for the perfect word to describe a scenario in which Mourinho is sacked while the top three clubs in the Premier League are managed by Claudio Ranieri, Arsene Wenger and Manuel Pellegrini.

What a BABY i thought Akpom was more mature than this!!

Bruce hardly demonstrated restraint or man management with his comments either. But then that’s why he’s Steve Bruce, and arsene Wenger is arsene Wenger.

My first reaction when I saw this story was to think “Why is Akpom being played in goal in the first place?”

Sounds like a couple of our loanees need some time on the naughty step. Chuba and Wojciech that is. Which is 2. Which is probably why I said a couple. Which is probably why nobody likes me. Is Arseblog the place to have an existential crisis? Probably not, too many thumbs down could be the proverbial straw on my dainty camel back. Speaking of which I need to get these humps looked at. That explains why I’m never thirsty anymore.

It’s okay mate, it could be worse. You could be Jose Mourinho right now.

Walking away with his £40m contract paid off? I’d be gutted.

Not all of it. He’s only being paid to the end of this season – a paltry £10m. Hard to see how he’s going to survive, really.

You’re mistaking José for a normal human who lives off food which typically costs money. He ravages the souls of the youth player and the attack minded midfielder for sustenance of course!

Plus Gnabri being too fat for Pubis and Jenks not popular at West Ham.
Come away from these cretin clubs lads, back to Uni.

Love this….but it makes me remember how much I miss rambling Pete

Our Chuba has immense potential to make it big. Just needs the right path and everything will be fine.

Will somebody please enlighten me as to why we sold Benik Adobe and kept Chuba Akpom..

The simple answer is injuries. He is now doing well at Championship level so it would be great if he could step up to Premiership level back with us. Though I suspect he’ll end up a nearly man, very good but not quite good enough for us.

1 goal in 11 games could be better. He’s no sonogoals but…

I think our Adobe trial subscription was going to be expired at that time and Arsene decide not to buy the full version.

Me So Hornsey
Reply to  Gandalf

Plus I don’t think he was enough of an Acrobat.

bims lay
Reply to  Me So Hornsey

Lol……..at least he was a Flash player?

Victor
Reply to  Me So Hornsey

Am I the only who thinks Chuba can get away with this ever since Blogs alluded his name to the Flintstones theme song? Chuba. Chuba Akpom. Yaba daba..

Apparently you are, yes.

Not the first time a footballer has behaved like a wanker, I think it shows how competetive he is rather than anything else, sort how he desperately tried to get goals in the few outings he had at Arsenal. I can’t remember him having a history of outbursts like this, probably frustrated with himself.

But those Steve Bruce quotes are quite harsh, and he’s a man I would like to get yelled at by!

Bollocks to Hull – and Steve Bruce!!

Yeah bollocks to the bloke looking after our player for the next few months.

Steve Bruce is entirely correct in this situation, and I hope Chuba will learn from it.

I’d be annoyed at the fact he’s wearing gloves in such mild weather. It was about 13° last night.

I’d like to know the identities of the World Cup winners who threw their gloves at Steve Bruce.

Me So Hornsey
Reply to  Cornelius P. Snuffington III

Maybe Thierry Henry, Emmanuel Petit or Patrick Vieira when he was still playing?

was it chuba who has the problematic mother too?

I believe that was Ainsley Maitland-Niles

I kinda like Steve Bruce, has that grandma feel to him. He will probably sit Akpom down and give him a good talking to.

Imagine he did that to Wenger… Actually, i can’t even imagine it. Makes you realise how much respect Wenger has earned. Can’t think of a player saying anything bad to him, or acting badly in any way towards him.

Me So Hornsey
Reply to  MannyG

Steve Bruce took a young Nickolas Bentner on loan from us once so his track record on improving young players attitudes speaks for itself.

I also saw a short clip of a Reading player giving Chuba an intimate kiss presumably in the middle of the game. Was it the angle and editing or did that actually happen?

Yes, it happened a few minutes before he was subbed

Well the specialist in victory has struck his final masterstroke. Being unable to manage a £260m team. Sad day for the press as the premiership loses its favourite clown

Eagerly waiting for @arseblog to cover the news from Chelsea

I bet it won’t. Not only Wenger cannot make any assessment on it because it’s not his problem but also we have some important topics to debate like who we should buy in January, which tactics to adopt against cute and which team to pick. Some important stuff really

Good for Bruce. His words were right on. Hopefully Chuba learns from this.

Needs a sharp attitude adjustment. He’s nowhere near good enough to be getting away with acting like petulant snobby primadona.

On the one hand, he’ll hopefully mature as a result of this. On the other hand, he did throw something at Steve Bruce. Win/Win in my book.

I saw the incident on TV and it looked more like he was frustrated with not being able to help the team win as opposed to some kind of general ‘bad attitude’ being alluded to online. Yes, he should have shown more control and that’s a big part of what going on loan at a club like Hull is for – to learn from your mistakes. But compared to some of the behaviour of our loanees in the past (partying/sleeping with chairmen’s daughters/smoking etc) if the biggest disciplinary problem a 20 year old player on loan has is a post… Read more »

This website uses cookies to improve your experience while you navigate through the website. Out of these, the cookies that are categorized as necessary are stored on your browser as they are essential for the working of basic functionalities of the website. We also use third-party cookies that help us analyze and understand how you use this website. These cookies will be stored in your browser only with your consent. You also have the option to opt-out of these cookies. But opting out of some of these cookies may affect your browsing experience.
Necessary Always Enabled
Necessary cookies are absolutely essential for the website to function properly. These cookies ensure basic functionalities and security features of the website, anonymously.
Functional
Functional cookies help to perform certain functionalities like sharing the content of the website on social media platforms, collect feedbacks, and other third-party features.
Performance
Performance cookies are used to understand and analyze the key performance indexes of the website which helps in delivering a better user experience for the visitors.
Analytics
Analytical cookies are used to understand how visitors interact with the website. These cookies help provide information on metrics the number of visitors, bounce rate, traffic source, etc.
Advertisement
Advertisement cookies are used to provide visitors with relevant ads and marketing campaigns. These cookies track visitors across websites and collect information to provide customized ads.
Others
Other uncategorized cookies are those that are being analyzed and have not been classified into a category as yet.
SAVE & ACCEPT
wpDiscuz
55
0
Would love your thoughts, please comment.x
()
x
| Reply