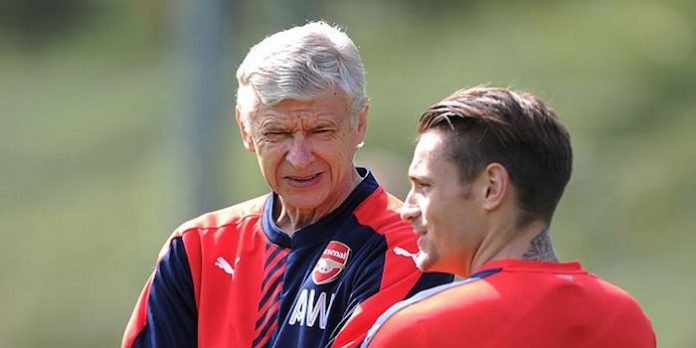 We’ll level with you, Arseblog News isn’t really fussed where Mathieu Debuchy ends up anymore. We’d rather just see a line drawn under one of this month’s most tedious transfer stories.

That being said, it’s deathly quiet and there’s a mini twist in the tale…assuming you believe the words of Sam Allardyce.

The walrus-like Sunderland boss has confirmed that he did contact Arsenal about loaning the right-back for the rest of the season only to give up on securing a deal.

Speaking at his weekly press conference, Allardyce revealed: “I’m not sure he [Debuchy] really wants to leave Arsenal, or that Arsene Wenger would let him go.”

That take on things is certainly different to the vibes coming out of the Emirates where Wenger has repeatedly said he’ll let the 30-year-old go on loan should he find a suitable club.

Given we’re 28 days into the transfer window and Debuchy has been moaning about his lack of game time since the summer, it’s certainly odd that he’s not yet left us. Thankfully, with the transfer window coming to an end we’ll soon have a definitive answer either way.

I don’t mind if he stays on the proviso that he closes his mouth and let’s an improved attitude and increased respect for Hector’s graft do the talking.

Exactly! Big ups to Kieren Gibbs, every time he’s been quizzed about Nacho, he has nothing but good words about him.

agreed, but will we trust him to play? I mean he should be motivated for every appearance because of his (delusional) belief he will get his spot back on the French team, but he’s been woeful every time we’ve put him into games this year.

I think I’d rather trust Chambers as the backup RB than Mathieu.

If this has all been an attempt to pressure Wenger into starts, it hasn’t gone very well.

Could maybe have to do with Jenkinson’s injury?

I think so. Jenkinson isn’t Arsenal quality and I don’t think he ever will be. I’ll never totally write someone off after what coquelin did, but i’m pretty sure about Jenkinson. He wasn’t even starting games for west ham. I don’t know why so many fans have these romantic notions about him — sure, he’s a fan, but that’s about it. As a player he’s distinctly average. Bellerin is light years ahead of him in his development. I’d rather Chambers at RB to Jenkinson. I say sell him off in the summer and if Debuchy goes, potentially look at bringing… Read more »

Debuchy and Allardyce I think would be a good match.

Jungu Beans
Reply to  Me So Hornsey

I felt that way for the last few months – meh. But now I wish this story would hurry up and fuck off. It’s a distraction and a drama that we don’t need. Debuchy needs to move out or shut up.

“I’m not sure he wants to leave” <— looks as if Sam hasn't really been taking much notice, doesn't it? Surprising, for such a renaissance man, who if it weren't for the inherent anti-Northern bias found in so many of the world's biggest clubs, would surely be leading the Madridistas to their 8th successive European Cup Triumph. Still, there are three days left for Matthieu to prostrate himself in front of Allardicio in the vain hope that he might yet get to participate in the kind of football that'll surely see him installed in France's starting XI come this summer.… Read more »

dominic
Reply to  the only sam is nelson

He’s… he’s trying to tell us something. What does he want? If only we could interpret his words and actions into some kind of sense!

Yes it looks like he’s staying, which can only be a good a thing, considering we don’t really have another adequate back-up to Bellerin. He can play in the FA Cup at least and give the young Spaniard a chance of a breather here and there. This weekend’s game would be a good place to start integrating back into the match day squad.

I’m not sure he wants to give up on his PL medal either. Maybe the only major competition he will win in his life.

Perhaps you don’t consider Ligue 1 “major”, but I believe he won that with Lille (alongside such luminaries as Hazard and Gervinho).

Yeah Ligue 1 was a pretty decent, even during the season Debuchy won it with Lille. Now it’s just some practice matches for PSG before their CL clash in the middle of the week.

Didnt he win a Ligue 1 title with Lille?

Should keep hold of him. Wenger has overplayed bellerin this season so would not be surprised if he picked up an injury later down the line. If he does we have an international right back ready to come in as opposed to a CB playing RB (Gabriel) or a footballer who doesnt even have a position yet (Chambers). Screw his Euro 2016 aspirations – club comes first especially in a season where we fighting for the championship. On a separate note I do feel a tad sorry for him and think Wenger has been wrong not to rotate the right… Read more »

Would be great if he stayed. The team would otherwise be one injury away from playing Chambers/Flamini as right back for the rest of the season. Neither of them has excelled in that position.

Also people forget how good his was before joining Arsenal. Was really good for France and benched Sagna at the World Cup. Has had some unfortuous injuries during his stay here but could kick on if gets some games.

Might be considered ancient history now, but I still remember watching him at Euro 2012 and being really impressed. That said, I can’t see how he thinks he’d get into the France team even if he left now. Sagna has been playing pretty well this season.

You mean the prospect of playing for the great Samuelinho Alladici doesn’t fill him with eagerness? I mean which self respecting professional footballer will not forgo winning ‘only’ the FA cup and premiership trophies when he can line up with Lee Catermole, Jermain Defoe etc whilst slugging it out with the current premier-league champions for relegation survival?

It’s a no-brainer if ever there was one!

If he really just wanted to play and we were really willing to let him go without getting a replacement in something would have been done by now, so one of those two must be not completely true. Maybe we were only ever going to let him go if we could get Jenkinson back or buy someone new? Or maybe he only wants to go to an upper mid-table team and not to any odd relegation struggler? Who knows. Either way, it’s really annoying that this is still dragging on, because it means we’ll miss another good opportunity to give… Read more »

some reports suggest that Arsenal are demanding a recall option on any loan deal for Debuchy, so if Bellerin gets injured we can bring MD back at 24 hrs notice. Not sure how the whole naming of the 25 man BPL squad thing works when it comes to players loaned out.

Interesting. That would certainly explain the slow progress.
As for the 25-man squad rules: you can effectively keep a loaned out player on the list if you don’t replace them by someone else, allowing them to come straight into the squad if they are recalled.

I would presume he is already on that list.

ME: I’M NOT SURE DEBUCHY WANTS TO GO TO SUNDERLAND

Sneaky clever tactics from the big ole Sam, nobody could possibly guess you’re only saying this because Arsenal rebuffed your bid of three silver pennies and a rug made from your walrus fur for Debuchy, nor did the player accept two pints of poo, a groan and a bottle of sweat from Phil Collins’ forehead per week as salary. But they just might if you out them in the media you savvy old bugger you!

stay/go don’t matter none, but do zip it!

I wonder, fairly irrelevantly I will add, of he’d not be better off to go to one of the strugglers. Means a lot more time defending out and out in a team more under the kosh and really giving himself a chance to show people what he can do. Personally want him to stay though, because if he goes we become very light at right back. Be a mildlyinteresting/not really too bothersome next few days

Sebastien Frey for backup right back! Arsene is a master of changing players positions, so if you’re going to go for the Frey rumour why not go the whole hog!

…not for Sunderland at least.:D

I couldn’t care less about Debuchy playing at some pointless international tournament, so I don’t care where he ends up.
Seems to me though, the longer this drags on, that he just wants some attention. Maybe Dechamps will have no choice but to pick him as he won’t be able to forget his name after all these rumors. Hopefully the France boss won’t have forgotten his performances and then he can miss out after all this pouting in public.

Debuchy at the moment = facepalm