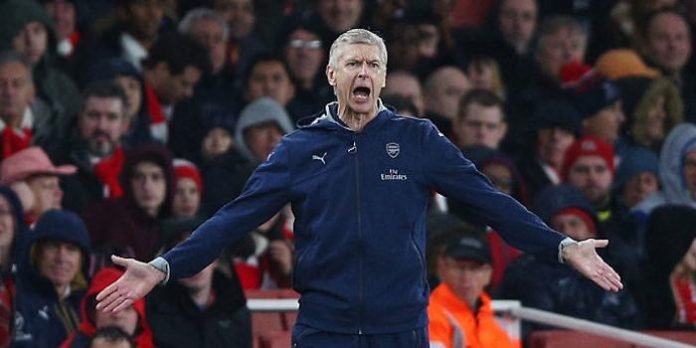 Arsene Wenger says he’s feeling the title-challenging vibes from his team after a hard-fought win over Newcastle brought their festive points tally to 9 from 12 and saw them top the table on their own after Leicester City dropped further points.

A goal from Laurent Koscielny on a day when the Gunners failed to reach the heights of previous performances spoke to an ability to scrap out a win that hasn’t always been within the reach of previous iterations.

And it has the Arsenal manager feeling that there’s something stirring within his squad.

“The experience, the quality of their attitude, the team always has the charisma,” he said. “If you look at the team as a unit, it is like person.

“If you look at your team like a person and the vibes that are coming out – you can sense in this job if you feel it or not.

“You fight, not to concede a goal, not panic and wait for your chance. We were more questioned on that aspect than the way we play football so it is good sometimes to win like that.”

Wenger says he’ll give his players some time off ahead of Saturday’s FA Cup tie with Sunderland, and while there are bound to be some changes to his side, the squad depth suggests that he can’t do a huge amount in that regard, unless he turns to some of the youngest members of the squad.

We’ll find out more on that as the week progresses.

I hope we don’t play too many youngsters on Saturday. Much as I want us to win the league, I also don’t want us to give up the FA Cup!

Something’s got to give.

remember the invincibles
Reply to  Caleb

nothing has got to give. We already got thrashed by Southampton so the giving is done for the near future. Ta.

I’m indifferent to the cup given how good a chance we have to win the league this season. While I wouldn’t want to see a League cup team on Saturday, I would think about resting the players we can’t do without in the league.

A team like the one that beat Bournemouth but without Giroud and Ozil perhaps. We have some tough games coming up this month.

Were you indifferent in May?

I’m thrilled at the league prospect but quite indifferent too on the cup because of these injuries. surely the Sunderland match is chance to fully rotate, but unfortunately the choices are limited. expect Ospina back in goalie, hope he shows something positive after that dreadful Olympiakos game. Gibbs, Chambers and Gabriel should feature. in midfield maybe Oxlade and Campbell will play together, with Alexis expected to be back. Doubt any new signing at the time. but apart from that who else? the kids were trashed against Wednesday. I don’t expect anything on the cup. Doing a double would be magnificent… Read more »

Why has it taken this long for a Kelly’s Heroes reference to pop up on Arseblog? Genius. Thank you Highberry.

Chuck the Champions league. Attempt the domestic double. 3 doubles will also be some kind of a record for Arsene..

Sorry but if going out early in the FA cup increases out chances of winning the league even by 1% its worth it…. IF we do go out against Barcelona and go out in the FA cup i do believe that will make the difference in the league title… just look at Liverpool two years ago all that rest and preperations was a huge advantage…

And how did that season turn out for them.

Really hope we win it and there’s a chance. However I don’t think we’ve put a run of really convincing performances together yet and I’m also scared that we have a Southampton performance in us, ready to be unleashed at a moments notice.

Wenger in and out
Reply to  Mike

We have away games at Stoke, ManCity, ManU and Liverpool.
Hope we have learned enough and won’t have BFG telling us how we are still gonna learn after these games.

Non related issue
I’m watching premiere leagued download on NBCSN and Mourinho is being interviewed, the mofo has repeated he is a very humble man like 10x.

FA Cup can go hang this season. We’ve broken records with it, now to win the league! The sooner we’re out of Wednesday night and FA Cup games the sooner we can put on a run like we did at the start of 2015.

People talk about us needing a winning mentality.
Giving up a major trophy (especially one we have a history with) doesn’t help with that, irrespective of the players involved. The team wins and the team looses.
If we go out of the CL in the next round then I’ll only have a problem with it if we don’t compete to win, but to give up on the FA Cup before it even starts would have a negative effect on the team.

Last 4 games away in the Premier League:

We’ve still got to play City, spuds, Mugsmashers, Man U and Stoke RFC away. This is a worry!

Yet Arsenal is 2nd in the away table. Better than in the home table. So…
I see this team as fitted for big games. I expect them to play much better against the 2 Mans than against Southampton. The next game against Liverpool should give us a taste of what to come.

Every game with these lads is a worry (home or away). But that is how we do it. The Arsenal way (full with suspense and drama). We are the gunners, we do it the hard way! COYG

Our performances have left a lot to be desired but if we keep picking up three points who cares? However ugly, as long as we keep winning before our absentees return, the boss has hit the nail on the head. We’re showing signs of title winning credentials but my only concern is that defensively, we’re riding our luck at times.

City has a more favorable calendar than us, and they have less injuries. We play Liverpool, United, Tottenham, and City away. That’s one more away, against the top 5, than City. From now on we need to have a better average points/match against the mid and bottom tiers to win this league.

Shall we bum something

You’re in the wrong place. You should be on a Spuddies web-site!

The press as per usual now seek to minimise our efforts this season. “No one wants to win it” But as soon as City show some signs of revival or Spurs have their usual mini surge, suddenly they are worthy of the title. As soon as we are on top, the weak becomes a ‘weak’ one this season. May as well say Chelsea were extremely lucky to walk away with it last season because Arsenal shot ourselves in the foot early on, United were a ‘team in transition’ and City were suffering their usual post title hangover. Spurs will always… Read more »

No mention of Jack….or Ox for CM….

I couldn’t agree more! It drives me absolutely mad how illogical a conclusion it is to believe that this season is weak because no 1 team is running away with it. Surely that means the league is more competitive than ever? I mean, I’m pretty sure that’s actually the definition of a competitive and healthy league. But, I guess it’s because the fashionable ‘big spending’ teams aren’t at the right end of the table is symptomatic to this being a crap season and not one of the most compelling and ‘genuine’ seasons in years. This is what it looks like… Read more »

We go for it. Why not? Its absurd again not to.

It will be hard to retain it a third time but we may well be out of CL, we don’t know if we can carry through with title.

The FA cup is an important insurance for the season to keep some success and momentum in case.

What’s that about eggs in one basket?

We have the squad to keep going so long as we reinforce midfield.

Ai hope he rests ozil….unleash the jeff!! Gnabry, is back. Should have no problems slotting back in for a cup run out. Start theo up top and rest giroud…agree with goalies being swapped and give kos a rest with gabriel….gibbs in for nacho. Nice fresh team and lots of rest for ozil, giroud and kos. : )

Also being sunderland are in a bit of a dogfight….i wonder how strong they will make their line up

Who can say which match is hard or not this season? Let’s give it a go on all remaining fronts! COYG!