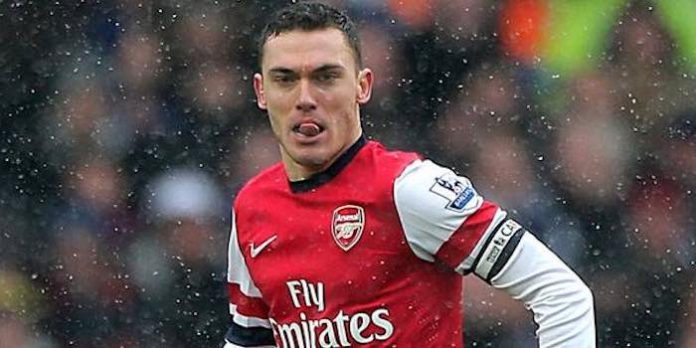 While he’s unlikely to start tomorrow night’s game, former Arsenal captain Thomas Vermaelen says that a return to the club where he spent five years will be special for him.

The Belgian international has struggled with injury since his £15m move in the summer of 2014,

“It’s a special game for me,” he said. “It’s a match against a team that I spent five years of my life at and that I have great memories of. So it’s going to be special.

“I will go there and see a lot of ex-teammates and the others around the club. I haven’t been back there since because I haven’t had time. Hopefully I can see a few people there.”

Vermaelen also singled out Francis Coquelin as somebody who has added something to the team since his re-emergence.

“I’m impressed with Francis Coquelin,” he said. “I know him quite well, when I started he was already there, training with us. Even if he wasn’t playing in training I found him impressive, so I’m not surprised at all he’s doing well.

“He’s a key player for them, helps them keep their shape and gives Arsenal stability.”

After a nightmare first season, he’s made 17 appearances for the Catalans this campaign, and if he does play tomorrow night, let’s hope he’s left his shooting boots at home. They have enough goal threats as it is.

Listen to this week’s Arsecast Extra, looking ahead to the Barcelona game and much more.

remember the invincibles
Reply to  alex

I don’t have many great memories of Vermaelen. I remember him clumsily bundling in a winner for us against Newcastle in injury time once. But that’s it.

Revisionism is the word that springs to mind.

Stillmatic
Reply to  remember the invincibles

Comments like these are exactly the reason why sometimes it’s smart for players to not show loyalty to clubs.

For as much as some fan plead about players lacking loyalty, they are the most fickle and quick to turn on ex players who have shown the upmost respect to their ex club, just because they didn’t achieve the performance standard many fans had hoped.

In his first season with us, he was our top scorer for the first 10 games?

Just not a very good defender. Amazed that Barca and Man U were in for him and we managed to get 15m. Not quick, not good in the air.

Decent passer, has a rocket shot, good technique going forward but that’s not really what you want in a defender.

I don’t know about you, but I like him in red and white jersey. Numerous goals of header and free kick, including one on his debut. He irritated us a little bit in the end, but at least he didn’t go full retard like Cesc and Robin. He’s not a world class defender, yes, but at that time he was our better defender. Then again our whole defense organization was absolute shambles and we can’t just blame him on that one.

Maybe their centre backs being good passers of the ball means more to barca than it does to us? I think the injuries and playing at LB really ruined his confidence and people’s confidence in him.

Vermaelen is a bit of a mystery to me. Could have been a solid part of the spine of the team for a lot longer than he was here. Weird he was captain. And he’s also not anything like Koscielny or Mertesacker, which makes me think Wenger completely changed his mind about what sort of CB pairing he wanted. Weird. Had a great left peg.

In tragic news for me, I learned that Adelle is from Tottenham. Surely nothing good was supposed to come from that part of London???

Who says Adele is good?

Let them have Chavdele. We have The Kinks, Depeche Mode (Gore anyway, the others are Chelsea scum) and… yes that right – SPANDAU BALLET!

Osama, for all his faults, was still a more honourable man than Piers Morgan.

Osamas wife is a more honourable man than Piers Moron!

He remains an enigma for me. Though an enigma is probably not what you want at centre-half. But this is someone who spent eighteen months on the bench for Arsenal and still talks respectfully of them. (Let’s face it, he now plays for the best team in the world, he could easily turn his nose up at us.)

Contrast with Debuchy who only spent a fraction of that time on the bench. You realise what a dignified fellow Vermaelen is.

Also poses a very credible goal threat on set pieces a well as i recollect him scoring a few of those for us when he was here, so lets hope he forgets that at home as well!

Did we ever get that bonus from them winning the Champions League after?

Probably not, I’d be suprised if they’ve stopped using IOUs for the Fabregas fee.

No. Claudio Bravo (GK), Douglas (RB) and Vermaelen didn’t play a single minute in the 14 games Barca played in the Champions League campaign that season. According to UEFA rules, those players aren’t considered champions.

But this has nothing to do with whether there is a bonus or not. It’s absolutely conceivable that the add-on, if there is one, was phrased in the contract as ‘if barca wins the CL’.

Sad to see him getting mugged off on here, his first season was absolutely outstanding for us but just went on a rapid decline. Was such a shame injuries ended up ruining things for him. He basically was everything Koscielny is now but with goals! Was a nice touch was having him lift the FA cup in 2014. Having seen so many players kick up a massive fuss for not getting played he was a class act till the end.

surprised by the hate here as well for our former captain. He never went full DeBuchy and we made a nice profit on a player who is always hurt.

We have great memories of you, our very own Verminator. Specially of that Newcastle (?) match in which he scored at both ends. Personal favourite of mine. Will be good to see you again.

Vermaelen was a very dignified and respectful professional for Arsenal. Unfortunately, the injury was the massive blow as he lost his confidence after that. He deserved the captain’s badge and should be accorded respect when he returns to Arsenal tomorrow.

He was not a bad defender. I think injuries really affected him. I like his professionalism and his spirit. Nothing like Adebayor or Roben van Persie. I wish him all the best

If you think about it, the Alexis deal was a masterstroke. 35m was it?

I know they didn’t want to keep Alexis, but I consider it a small victory given how they’ve ruined some of our players in the past. Cünts.

The Verminator scored a towering header on his debut. Thats an imprint that will never go away.
Plus he didnt bitch like DePu**y even though he is a much more capable defender.

I hope you play verm! I know I will clap for if your number comes up.. Not only because you were our captain and are a gentleman footballer in a time when most others are spoilt disrespectful shites, but also because you aren’t very good at defending and I want the Arsenal to win.

There was a time when The Verminator was one of our better players. The time of Silvestre, Squillaci, Senderos and Djourou.

he was class. beautiful technique and ball control for a defender; injuries dented him badly.

hope he still has great years ahead of him.

He was and is a classy Arsenal player and fan. He was chosen as Captain by the manager of one of the classiest and best teams in professional sports. He was captain of a team that struggled to provide and was missing a defensive element in it’s midfield. He was good enough to be chosen by one of the OTHER best teams in football. I bet he was captain because he did exactly what his manager asked and was a leader. I say cheers to the Verminator, a great player, teammate and captain. I hope you have a healthy and… Read more »

I hope he gets a good reaction from the crowd tommorow. I also hope we fuck Barcalona up.

Anyone remember the assist for Giroud against Newcastle I think? One of Giroud’s best goal in an Arsenal shirt.
I have always liked Verminator and always will. Hope he regains his confidence and form at Barcelona, but should probably delay that till the last week of march.

I think he also suffered in that he was part of a woeful arsenal back line that had no organisation (before Bould joined the first team coaching team and when Wenger utterly refused to get a defensive coach in). You could tell because week in week out, he kept bombing forward yet it seemed he was never even instructed to actually, you know….defend? This was also at the same time the fans kept having at go for Song for constantly going forward only for Wenger to reveal he was going forward at his request. Maybe it was the same thing… Read more »

Love how much leftover rotting poo we sold Barcelona over the years. Other than Thierry and Cesc I didn’t at all mind getting rid of any of them at the time and even less so in hindsight.

Care to steal Mathieu Flamini or Yaya Sanogo from us this summer, dear old Barca?