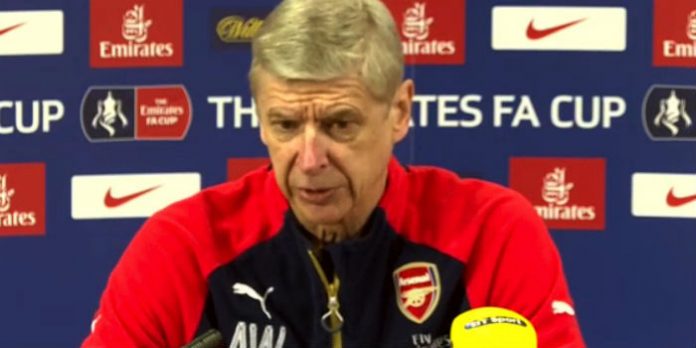 Arsene Wenger says he’ll play a strong side against Hull City in the FA Cup fifth round as he bids for a third consecutive success in the competition.

Revealing Laurent Koscielny will be available and that Gabriel could be back in a week, the boss gave his latest team news update.

“[I will play] a strong side. A normal side. Koscielny will be available. He has a test today but the test will be positive.

“Gabriel is still out. Honestly, I believe one more week [then he’ll be back]. He started running yesterday, so one more week.”

On Jack Wilshere, who has yet to play this season, the boss added, “I think three to four weeks for him.”

Having watched Danny Welbeck come off the bench on Sunday to score the winner, Wenger admitted he is tempted to start the England international for the first time this season.

“Yes, I might start him [Welbeck]. I haven’t decided yet. It crosses my mind to start him, yes.

There were also hints at other starters: “Petr Cech, it’s possible [he’ll be rested]. He won’t play tomorrow.”

Good chance for a bit of rotation and some of the squad players to have a go. With a strong bench just in case.

The players are at home and should be strongly motivated to retain the trophy and impress the manager so pretty optimistic.

Good to see some Johannesburg fans on here!!
Was there in Diepsloot for a hair cut just last week.

And at least one from Cape Town! ^^

You went to Diepsloot for a haircut?

I’m guessing they give really, really good haircuts in Diepsloot?

Alex
Reply to  Keepin it MonReal

His passion for himself, you mean…

The Cape Ozil
Reply to  Keepin it MonReal

I know I’m going to get at least a few thumbs down for this but I don’t think Wilshere should get a run around in the PL unless the game is already won. He is going to be rusty and in my view he already makes some strange decisions in games; running too much with the ball and making some dodgy tackles. He does have an amazing ability to ghost past players and usually has a great touch, but like Walcott his potential doesn’t show consistently enough in my books.

Would be good to see elneny get a run out.

Sanchez should get a good hour under his belt too – find them scoring boots again.

I’d rather put Sanchez on for the last 30 mins, regardless of the result, it’s enough to do something, have more match fitness, but still recover fully til Tuesday which is really close.

What about Cazorla? Any news blogs?

I rang blogs, but he was on the phone to the physio at the time.

Only right back and CB have an issue with rotation since Chambers can play right back to rest Bellerin then it will leave Per and Koscielny to pair CB which would not rest the Koscielny . So either Bellerin or Koscielny is not going to get rest.

I thought about this solution too, but wouldn’t that leave Per even more exposed than with Bellerin? I mean, Flamini would be up in their box just as much as Hector, but without the backtracking speed…

Campbell as right back, perhaps?

You only have to feel for Joel Campbell though. He did everything he could to earn a regular slot but he has been booted out of the team, even players who were awful recently are now ahead of him in the pecking order.

True, seems that Arsene still wants to have Ox and Walcott in the side and hopes for their better performances. Walcott did justify it a bit in the last match (more than a bit), by scoring that hugely important goal.

I don’t think that is the case.

As mentioned in the Tim Stillman column, it is more the case of having a more explosive type of wide man on the right. Joel is great in his combination play, movement, and technique, but when isolated out there with everyone being drawn to the left with Alexis, it is more beneficial to have a Walcott or Ox type who can fend for themselves.

He is a super talented player and will no doubt get more games before the end of the campaign.

No mention of Campbell? Also we should know Santi is coming back. Can’t wait for tomorrow COYG

what about Michael Olunga

Hope Iwobi gets to play this one…and probably rest Giroud; let’s see how Mr Theo will do up top.

Interesting no update on Carzola, I hope that means he is expected back sooner than Wilshere, do miss watching him play. Great to see Koscielny available, but hope Wenger doesn’t start him to give him some more time before Barca match. Definitely should start Elneny, not sure on Welbeck whether it’s better to start and go as long as he can (probably so) or come in as a sub. If Welbeck does start does he go in at striker with potentially Walcott wide right or does Walcott (if both start) go to striker and Welbeck wide right (or switch off)?

Must seize the opportunity to rotate players. Pretty much the last chance to do it. Any team we can put out should still be raging favourites against Hull.

Giroud, Ozil and Alexis definitely shouldn’t play; shouldn’t even be on the bench. We need those guys as fresh and injury-free as possible.

I would start the following. Welbz should definitely not be starting. Ramsey brings a certain level of workrate and support Walcott. Bellerin and Monreal will be tested more than Kos/Mert against Barca so they’ll need to be well rested.

If arteta is fit, then put him in flam’s place and move flam to rb.