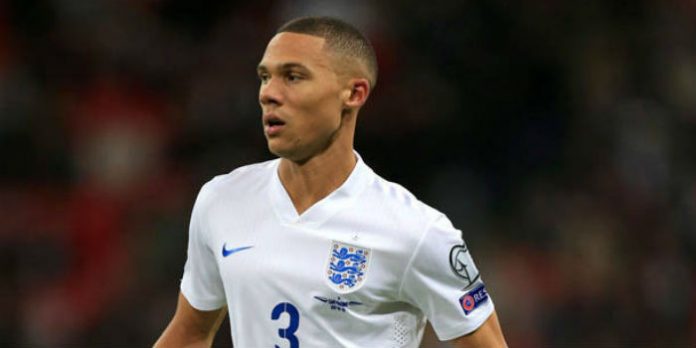 According to the Mirror, Kieran Gibbs has missed out on the chance to play for England against Holland this evening because he’s on holiday in the USA.

Three Lions boss, Roy Hodgson, opted to call up left backs Danny Rose and Ryan Bertrand when he announced his original squad, however, after the latter picked up an injury, a call summoning the Arsenal man was made.

Unfortunately, Gibbs, who’d been given permission to go on holiday by Arsene Wenger, was already on the other side of the globe enjoying a Stateside jaunt.

It’s reported that England, who knew about Bertrand’s problem before the weekend, could have called on the 26-year-old earlier but waited until after Saturday’s 3-2 win over Germany.

While Gibbs will likely be frustrated at the missed opportunity to put himself at the forefront of Hodgson’s mind ahead of EURO 2016, there is a silver lining for the Gunners; England will in all likelihood be forced to play Sp*rs man Rose for the second time in a week, hopefully knackering him out ahead of their trip to Liverpool on Sunday.

That only seems fair given Hector Bellerin played 180 minutes for Spain’s under-21s as they lost to Croatia and beat Norway.

Theo Walcott has been named on the bench for tonight’s friendly. The winger had been expected to start but suffered a dead leg in training and may not be risked at all.

He needs the rest. And more on te benc when hhe returns.

I wanted that to read ……..’enjoying a stateside joint’

Then things would have been really interesting.

Probably wouldn’t have played anyway. He’s going to need to leave to get the regular game time he needs to become an England regular.

You know things are bad when an average little chubster like Danny Rose is ahead of you in the pecking order.

Yup, like we are going to overhaul the 11 point gap with Leicester anyway. Dreamer.

Let him dream if he wants. At least he isn’t a Negative Nigel like you.

If we win the game in our hand and they loose to Southampton, West Ham, Man U and Chelsea then there is 15 point swing for you. It can be done.

@spinner, it will be 8 points back if we beat West Brom (the match in hand). If you think that’s impossible, you might want to Google “2011-2012 Premier League Season.” Better yet, just ask a United supporter.

Spinner how long have you been watching the premiership?

arseblog
Admin
Reply to  ...why?

Do the quips and witticisms on this site ever end…

Could maybe teach Theo how to defend

Shame for Gibbo but I’d rather see Walcott get a game. A decent performance might kickstart some good form for us, however I think Arsene has already given up on him and he’ll be gone in the summer.

Who the hell is going to buy him with those wages? He isn’t going anywhere.

That must be frustrating for him – about as frustrating as waiting for this Interlull to end. Come on Arsenal, let’s get 8/8 and see what happens!

Which leg was it that died?
Imagine how useless he will be with only one leg..

Theo’s had a dead brain for years now

Shocking to hear Bellerin played 180 mins for the bloody under 21s. The player has played lots of football recently for us and then this. Worse we can’t afford to rest him. Sometimes international managers are their own worst enemies.

Doesn’t matter friend. Bellerin is young and should play as many games as possible. He will remain sharp that way. I fear for Ospina. Supposedly he hobbled off the other day. Btw, any news of Cech? Is he fit to start this Saturday?

Monreal is a truly fantastic defender but we should have used Gibbs more this season to avoid Nacho tiring so much. Trouble is Gibbo always requires a run of games before he finds any form. Same thing applies to our right side. Bellerin must be absolutely fucked by now.

This is similar to the dave o leary jack Charlton spat in the late eighties. Dave went on holidays when not selected for a mockery mouse summer tour of Iceland or somewhere. Then got called up but was away topping up his impressive tan. Jack dropped him for 2 years. Dave was still a quality player and well capable of playing at international level. Big dave then popped up in Italy 90 to score a big penalty v Romania. So a key penalty comeback for gibbs will complete my tale.

OT: anyone see the germany/italy friendly? Özil in a deeper playmaker role. Very cool he was.

In which case someone like Iwobi can be played higher up. Coquelin will have to find equilibrium with the German which is of course a bit of a risk as it may take time to gel.

But it gives us another option to develop.

We miss the extra creative man in midfield when Santi went out injured. Our distribution from deep plus Ozil higher up has been missing as a result.

Gibbs needs to add a bit of end product out wide.

Feels like he lacks confidence because he certainly has the pace to terrorise defenses albeit his touch can be loose at times.

Regardless of Gibbs and Monreal, we will need to start recruiting the next Lback for the academy to develop sooner than later.

He would also benefit from learning to use his right foot occasionally.
Most defenders have worked out that if they can turn him inside into a position where most would take a right foot shot, then he can only use his left to pass the ball backwards…