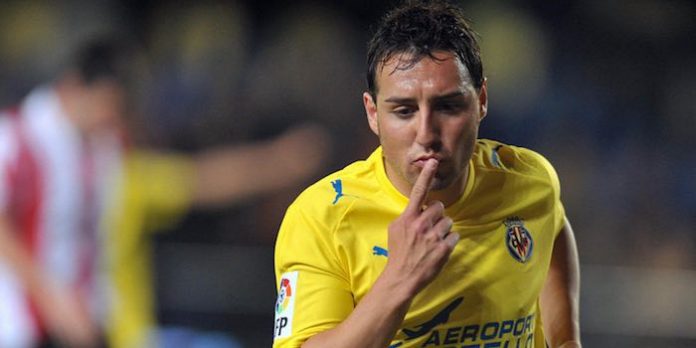 Santi Cazorla says that Villarreal remains a special club, and one that he might like to make a return to at some point in his playing career.

The Spanish international began his senior professional career there after moving from Oviedo in 2003. He spent a total of 8 seasons there, with a move to Recreativo in the middle, before signing for Malaga in 2011 – from where he joined Arsenal for £12m in 2012.

At Villarreal he played alongside Arsenal luminaries Robert Pires and Pascal Cygan, and speaking ahead his former club’s Europa League clash with Liverpool he spoke in glowing terms about what it means to him.

“I would not rule out returning to Villarreal,” he told AS. “Everyone knows how special that club is for me.

“If I get permission from my club I will be attending the second leg at Anfield, as another ‘groguet‘ [‘yellow’] supporter.”

Meanwhile, transfer rumours from Germany suggest we’re looking at Bayern Munich’s Rafinha, who I mistakenly thought was the other Rafinha but I was thinking of Thiago, his brother.

This one is a 30 year old Brazilian right back, which is just what we need. He does look a little bit like Simon Pegg, so that’s something.

Cazorla is still special to me…

Take car, kill Phil Collins, grab Alexis, go to the pub, have a nice cold pint, and wait for all of this to blow over.

Is groguet Valencian for yellow or is it slang?

I thought it was amarillo in what we call Spanish, so I’m curious to know.

It’s like ‘yellowish’ in Catalan/Valenciana, with groc being yellow.

It is Valencian for yellow, no slang. I would say it’s actually Catalan, but I may involuntarily start an argument.

As you rightly point out, amarillo es yellow in Spanish / Castillian

Thanks both. Much appreciated.

It’s always amazed me how we’ve got away with playing Peter Kay for the last five years.

New contract for cazorla with terms that prevent a return to villareal, call it the santi clause…. I’ll get my coat

I think Arsen Wenger, should let Cazorla leave for Villarreal next season. Since he’s started getting injuries and not forgetting his age too!

Love Santi but I think part of our problem over the last few years has been near zero goal threat from midfield bar Ramsey. Think we need to try and get someone better in.

Before we moved Arteta back, he scored goals. Cazorla got his first Arsenal hat-trick a full 2 years before Giroud got his; before we moved him back. See the pattern?

Cazorla getting injured is probably the single most specific reason the second part of our season fell apart.

ClockEndGal
Reply to  Me So Hornsey

No “probably” about it! My heart sank.

Have we already forgotten Santi/Coq partnership in the middle? That works well. We miss Santi big time! Elnenny is a good addition but Santi has a year or two of top quality football still left in him.

Yeah, sell him add that cash to stash we got and buy Pogba.
It’s easy, right?

Then sell Walcot and buy Lewandowski with remaininf ?

This FM fans forum, isn’t it?