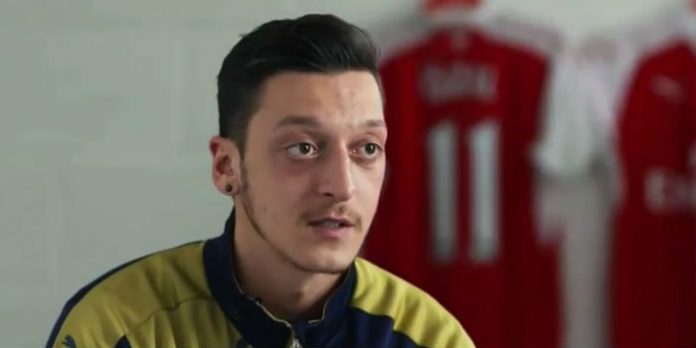 Ahead of Arsenal’s game with West Ham United, Mesut Ozil sat down with BT Sport’s Raphael Honigstein to discuss his recent comment that the Gunners ‘messed up the title race’, his ambitions for the future and why he’s happy at Arsenal.

Here’s a transcript from the teaser video…

RH: You recently said that it’s Arsenal’s own fault that they are not at the very top, maybe this was interpreted the wrong way? Can you explain again exactly what you meant by that?

MO: I didn’t say it like that, quite the opposite. I said it’s not in our hands anymore. It very much depends on the how the two teams in front of us play and of course they have to lose some points. I think we did fight against the smaller teams, but in the back of your mind you think, ‘Oh, this will just happen on its own because we have this quality.’ This is how we lost some stupid points that have cost us a lot this season.

RH: Sometimes people say about Arsenal that they are lacking leaders, big characters. Do you feel that you are taking on more responsibility?

MO: I don’t think we need any ‘big characters’ in the way they were defined in the past, players in the club who scream a lot and slaughter their team mates. Everyone here has a voice, it is not that this experienced player is right and that player isn’t, instead you work well together as a team and that is why I feel good here.

RH: What could you do to play better? Where can you get those few percent more?

RH: You say you shouldn’t show your frustrations, because it possibly had a bad effect on your teammates?

MO: It’s more for the fans, the people who watch the games because they might think I’m not fighting anymore.

RH: How close are you to extending your contract?

RH: Do you think something surprising could happen up to the end of the season?

Even though a lot of people say it isn’t possible, I think and I have always thought that anything is possible in football and if we win all our games then I am convinced that we will be right at the top come the end of the season.

It looks as though there’s much more to that interview; additional quotes, including the below, are also floating around the web.

“I always want to play for the biggest teams in the world, and in the competitions like the Champions League and it is my goal to win many titles, and I know that I can win titles with this team but to achieve that we need a big squad, if players get injured, it’s just like that.

“That is why I said a lot of things have to be right, it is my aim to help the team and it is our goal to win titles and I think you can achieve that with Arsenal. You can realise your dreams here, and if we get in a few more good players, I think that will happen.”

“We know that Leicester has had a fantastic season. They have of course surprised everyone in the world, but there are still some games ahead of us and anything can happen in football. It is our aim to fight right up to the last minute and in the end we’ll see if it’s enough for us or not.

“As a football player you always think ahead and I know that they still have a few games in front of them that will be difficult. It is has to be our aim to be there when they lose some points and we win our points and now it is also an important game for us on Saturday against West Ham. We have to definitely get the three points there and that’s what we want to achieve.”

Tune in to BT Sport before Arsenal vs West Ham United for the full interview.

His coments make me nerrrrvous guys re his contract extension…

Arsene-al fan
Reply to  The Only Olivier is Giroud

Flamini will have been telling him to run it down to the end and get a bumper pay rise.

Dhruv
Reply to  The Only Olivier is Giroud

He came to Arsenal for Wenger. He is waiting to see who replaces Wenger, if its a underwhelming appointment, then he will probably leave.

Laviano
Reply to  The Only Olivier is Giroud

Hopefully he’s just delaying it or putting question marks around it as a bargaining tool to get the club to bring in the top quality players in certain positions we need this summer so the squad can fulfill its potential. Hopefully.

We’ve heard this story before.

We’ve got Özil, Mesut Özil…
You know the rest! 😀

Thanks for the anxiety-inducing ellipses…

Happy to hear he’s working on his body language just for the fans. If I didn’t like him enough already…

I get the feeling that Germans are more ‘honest’ in their media responses. Everyone from Ozil, Mertesacker to even Klopp call a spade a spade. British players on the other hand I feel are trained to be somewhat ‘boring’ to avoid controversy. Ramsey, Walcott, Wilshere, all of their responses could be recycled irrespective of the questions.

Go and ask Nigeria what changed as caused them in the country. Instead pray for Positive change instead of just change. Wenger should finish his contract. A good striker, good winger and another midfeeder