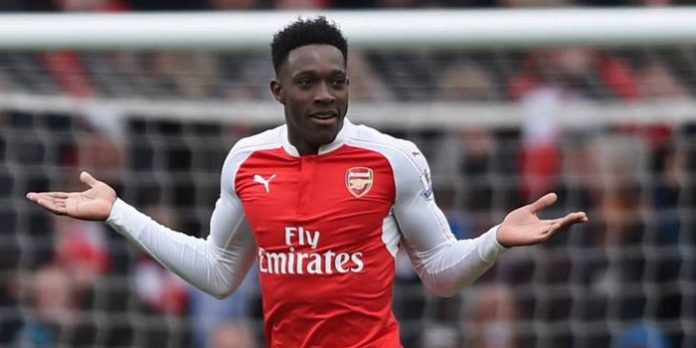 Arsene Wenger says Danny Welbeck appears to have returned from his spell on the sidelines even stronger but still believes the England international can improve his finishing.

Scoring four goals in nine appearances, the 25-year-old has looked sharp leading the Gunners front line since returning to first team action after ten months out with a knee problem.

Having learnt his trade on the flanks Wenger thinks that the ex-Manchester United man can follow the likes of Borussia Dortmund Pierre-Emerick Aubameyang, scorer of 22 goals in 25 Bundesliga appearances, and Thierry Henry, Arsenal’s record goalscorer, by moving inside and becoming more clinical in the box.

“I agree that he’s sharper,” Wenger told press on Friday. “I think it’s not physical, it’s mental. He looks like he realised he has to add something to his game.

“Maybe he was frustrated as well to be out for the first time for a long, long period. It has loaded his mental determination. Before he looked not certain of his game when he came to the finishing but now he looks much more assertive in his game.

“Danny has all the qualities you need in the modern game. He has pace, he has stature. If he adds that finishing quality he has all you need.

“It is a bit unusual [to improve as a finisher at Welbeck’s age], but I have seen it before, especially from players who moved from the flanks to the middle.

“We have seen that with [Pierre-Emerick] Aubameyang now at Dortmund, he was a very poor finisher on the flank. We have seen it with Thierry Henry. Hopefully we will see it with Welbeck as well.”

I noticed there was no mention of a certain Theodore Walcott as an example. Seems even Wenger has noted his lack of improvement too

Funny how Walcott gets slated when he’s not even mentioned in the article! Wenger was talking him up during the international break up, he believes in him too for better or worse

Age is taking its toll on Arsene’s brain; to compare welbeck to a top player like Aubameyang is not only naive but plain delusional. Oh by the way, another season OVER with Wenger in charge….

You should’ve seen Aubameyang at Saint Étienne in Ligue 1. He’s actually the perfect example that with hard work, you can become a top scorer. So why not Welbeck.

@ Matt. Don’t think Wenger was directly comparing Welbeck to Aubameyang. His point was that the transition from the flank to the centre could improve a player’s finishing. He used Aubameyang and Thierry as examples. He didn’t say Welbeck was like Aubameyang.

I’m not a Wenger fan, but I don’t think that twisting his words and using his age to attack him make much sense

Aubameyang was not a top striker with ac milan..he showed his potential with st etienne..then he became a world class striker with Dortmund..he has pace n a football brain too..(i thought max gradel was the next Aubameyang until he gets injured with Bournemouth)

The same goes to Welbeck..except for finishing..improve that n he can be a world class striker..

Walcott has speed but no football brain..10 years with Arsenal but no improvement..poor him..

Stupid comment. Aubameyang is older than Welbeck and would not have been rated a “top player” before this season.

This is what you get when you let your Wenger out agenda interfere with the habit(?) of thinking before you write/speak.

no, he’s just setting it up for when he has to explain why we didn’t sign Aubameyang…..”I didn’t want to kill Welbeck”

That was the first thing that came into my head. When Aubameyang signs for someone in the summer, don’t worry because he’s no better than Welbeck, i.e. “there was nobody better than what we have.”

i think simply he’s just trying to get the best out of welbeck between now and end of season, (as he will try to do with all his players, as is his job.) Some players respond well to having their potential believed in – others to having their ability questioned. He obviously thinks welbeck will respond better to the former (right now at least).

Fuck I love being an armchair manager!

There goes any hope of signing a top striker this summer. We already have a “top top top striker” in Danny.

Maybe he will improve his finishing, maybe he won’t. Either way we need another striker in…a top top top striker..even better than Walcott. lol
And a right back.
And a centre back.
And two centre mids.

A clinical finishing welbeck would be scary, given that he has do many other attributes,hes big, strong, fast, good work rate, just needs to be more clinical and he’d be a world class striker.

so there you have it folks. welbeck is the world class striker we gonna get. anyways, the truth about this ish is that, it most of the time just have to fall into place..vardy of leciester last season wasn’t so prolific..but became prolific this season.. spurs had soldildo and other at center forward position, kane came partially from their youth ranks, was loaned out to various clubs, before he became a decent striker, if wenger bought aubumeyang few seasons ago with his erratic finishing, we bemoan how wenger has lost his touch and all those such of cowballs.. sometimes even… Read more »

Can’t understand many of these comments. I really believe in Welbeck. I think we have an potentially fantastic striker on our hands. He’s got everything. Pace, strength, areal ability, clever movement and great work rate. Plus I think he works well with Alexis unlike Giroud. He brings greater fluidity to our attacking game. Play him as our front man for the rest of the season, and I think we well see good things from him as he familiarizes himself with that role in this team.

Welbeck really looked the real deal when he broke through at Man U. I expected him to replace Rooney. I still hope he comes good as a dependable striker, and not just someone who is a hard worker.

I don’t often agree with Wenger but he is absolutely right ..when Lewandosky left Dortmund I was one of those who wrote off Auba’s chances of replacing him..

Infact its such an irony he looked every inch like Welbeck all pace hard work but little end product..

The good thing is Welbeck can look at Auba as a role model..and fashion his game accordingly..

If he can have 60-70% of Auba’s success so far we will win the league next season ..or dare I say this season!

Welbecks injury really cost us this season….Wenger should have seen it coming though!!

Even Aubameyang first in Bundesliga affirms wenger point. Welbeck from Griezeman too, he too has done the flank-foward movement, although i wish he will be learning from him in our pre-season.

My post just affirms my believe that phones arent made for typing,

Love him too remember people bemoaning Wenger buying him as a last ditch attempt at getting anyone in but seems like he was onto something and times is definitely going to prove the nay sayers wrong.

Welbeck is going to be a phenomenal asset to the club. Honestly I don’t get this Wenger out thing at all. Are you all smoking skittles? How many top managers and elite players and hundreds of millions of pounds have you watched the shower of cunts currently below us in the league throw down the toilet spanking money on the latest hyped player or manager. I’ll take Wenger for next season thank you. And we’ll see how City/Manu and Chelsea get on with managers with zero premier league experience but loads in managing Galacticos in piss poor leagues. And I’ll… Read more »

How many hundreds of millions of pounds have you watched Wenger flush down the toilet only to see Leicester finish above him? Fucking Leicester and Spuds mate, there is no excuse. There is a reason why all the managers of the top team finish below them are not going to be at their job next year, all but Wenger that is.

10 million, thats what Cech cost and they were worthy in my opinion. And of course all the managers from big clubs that finish BELOW Arsenal will be replace, they were not as good.

Welbeck has been so promising since he came back. I support his inclusion in games ahead of Giroud. Also, I know that competition for that spot always brings out the best from Giroud, we saw that when Walcott was starting to score and vying with Giroud for that central position.

The Gaffer is talking sense and Welbeck can be clinical if he improves his decision making, good to see the Boss pick the team that played against Barcelona and Everton. Let’s win 8 out of 8 and see where it takes us, the team has done it before at this stage of the season to finish in the top four. The reward this time shall be the greatest – a title! Maybe I’m deluded…

Spurs will win the title

STOP. LET ME LIVE IN MY DELUSIONS.

After being out for so long welbz would b ‘like a new signing’. Anyway, sell theo, sell giroud n get a world class striker with welbz as back up.

When wenger starts making those statements,he is preparing fans for who he will sign in the summer! – Nobody for that position! Besides from now to the end of the season, the team will play well and injured players would be back- and they will be like new signings since we have top top quality. Then the Euros will start and he will be busy commentating and no time to sign players.