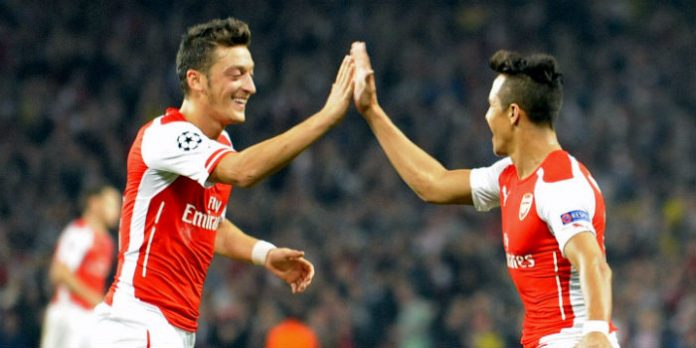 Arsene Wenger says there should be no problems over contract extensions for Mesut Ozil and Alexis Sanchez.

The Gunners are in negotiations with the duo to keep them in North London for the best years of their careers, and the Arsenal manager is not envisaging any hassles.

Ozil signed in 2013, Sanchez in 2014, but Arsenal want to ensure they remain in red and white with new deals to be signed at the end of the season.

“Yes, I am confident,” said Wenger. “Yes, they have a two-year contract left and there’s been nothing done yet.

“They look happy, when I talk to them they are happy and they want to extend their contracts so I don’t think it is a problem.

“That will be done in the break, in the summer.”

Wenger did, however, publicly admonish the German playmaker for comments he made earlier in the week.

When it was put to the manager that Ozil said Arsenal had ‘screwed up’ the season themselves, he responded, “The statement is not welcome. Because we have to believe, no matter if it is just one chance in 100, we have to believe. We only have a real chance if we believe.”

And on Ozil’s bluntness, he said, “I have nothing against that. You want to be fair and honest. But you want as well to look forward. I want these players to be rewarded.

“If you look at the effort they have put in since the start of the season, mentally in their work and dedication every day, you know this group deserves to be rewarded. But Leicester will say the same and Tottenham as well. There’s still good opportunity and we have to grab it now.

It does seem that he reacted to something without seeing it in the full context though. Ozil did say Arsenal had messed things up, but insisted the team had to keep going.

“We did not play to our potential in the games against the so-called smaller teams,” said the German. “You immediately get punished for that in the Premier League.

“But we still have a chance of winning the title. We have to hope Leicester and Tottenham slip up and then make the most of it.”

So, it’s probably a case that he didn’t see everything Ozil said and reacted solely to the bit about messing it up. And while they’re obviously both singing from the same hymn sheet, it probably wouldn’t do them any harm to clear this one up.

That’s that then. Let’s move on

Well he would say that wouldn’t he, but I hope it’s true!

Mesut’s an intelligent guy, he’s just saying it how it is – we’ve messed up this season, and with 8 games left and 11 points deficit, it’s not likely we will win the PL.

Pipe down Wenger, Ozil’s said nothing wrong. If you were as honest as him in your assessment, instead of all the ‘great spirit / commitment / respond in the next game’ comments then you’d have more people on your side.

On a side note: does Ozil get his number 8?
Cazorla 7? Hence Alexis his number 9? Probably Bellerin number 2?

if Arsenal is not qualified for the Cl next year, you can forget about Özil…

Thank you, Arseblog, for quoting the entire Mesut part! I read it first in German and was amazed by the debate.

It will take a fuckup of Sp*rsian proportions not to qualify for the CL this year.