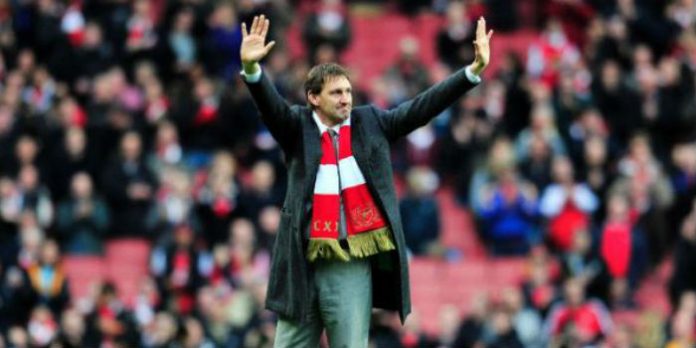 Tony Adams has confirmed that he’s held talks with Danish side Brondby about their vacant managerial position.

The legendary Gunner, who five years ago had a statue unveiled outside the Emirates, has been working for Azerbaijan side Gabala in various roles since 2010 and is eager to get back to coaching.

“I can confirm I am talking to Brondby regarding the coach’s position,” Adams said.

“I will leave Gabala later in May and I am looking to return to a manager’s job. Nothing has been decided yet and I am sure Brondby will choose the right person for the job.”

The Guardian report that Adams, who hasn’t managed a side in five years but is supposedly mates with Brondby’s owner, would even consider hiring former teammate John Jensen as his assistant; a role the Dane held for four years between 2002-2006.

This would be great, I’ve lived in Denmark for most of the past decade (married a Dane), and Brondby are my local team, would be brilliant to see them managed by a Gunner.

poo meter rating for this?

Can’t be nearly as high as John fucking Terry recently claiming that knew about Brondby as a kid and watched all their big games. All the bollocks, that man certainly talks them.

Legend for Arsenal though yet to prove himself a legendary coach. Lets hope he is developing.

Would be a good step up for him. Denmark’s top flight has a lot more quality than Azerbaijan’s.

I am always hopeful Tony will be a great manager one day as I would absolutely love it if he managed Arsenal.

He’s been an unmitigated disaster as a coach and manager. He should stick to helping sportsmen with personal issues, a very noble cause.

All the best. #Legend

Favourite Adams moments for me, the 98 goal on the last day against everton, and, although I was fairly pissed and a long way away, the most fantastic tackle at wembley in the champions league, against Kiev I think. Cant remember who it was, but they were clean through on goal and he timed it perfectly, right on the edge of the box. Genius. Those wembley games pretty much all merge into one for me, so might have the details wrong. What a shit hole it was too, bollocks to all this misty eyed stuff about the twin towers, it… Read more »

Never went to the old Wembley, so can’t comment, but the new one is just ‘meh’ – don’t understand the hate it gets, but I haven’t been there for something I give a toss about, so I guess it’s hard for me to have a proper opinion of it (although it did take about an hour to get served at the food kiosk when I went). It’s funny how people like different stadia, though. Loads of people sing the Millennium Stadium’s praises, but when I went, I thought it was a dump (good luck trying to find your seat if… Read more »

Be nice if he got it and made a good go of it. Done pretty crap till now in those roles. Even said at Pompey he looked for our results. An old girlfriend I think he called us.

Loved hit hits in the 80’s: ‘True’, ‘Gold’ and especially ‘Only When You Leave’. His time as lead singer with Spandau Ballet was magnificent.