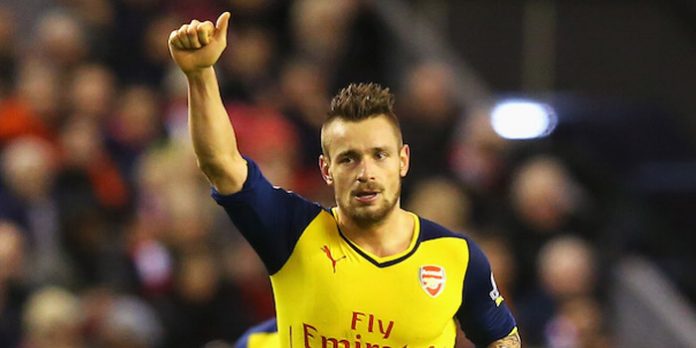 According to reports, West Ham United could make a move for Mathieu Debuchy with the defender sure to draw a line under his unhappy spell at Arsenal when the transfer window opens in July.

Eager to win back his place in the France team, the right-back agitated for a move in January, settling for a loan deal with Bordeaux when Arsene Wenger blocked apparent interest from Manchester United.

The return to Ligue 1 did little to turn the head of national team coach Didier Deschamps, although it was  a thigh injury, picked up at the tail end of the season, that ultimately killed off his chances of playing in EURO 2016.

The Gunners signed Debuchy from Newcastle United for a fee in the region of £10 million. As he’s still under contract at the Emirates we can expect to recoup some of that, even if his stock has fallen considerably since losing his place to Hector Bellerin.

Were Debuchy to move to West Ham he’d be following in the footsteps of Carl Jenkinson who spent 18 months on loan at Upton Park before his season was ended prematurely by damage to his cruciate ligaments.

While the East End side’s two chairmen, David Gold and David Sullivan, have already suggested the Hammers will throw the cash around this summer before they move to the Olympic stadium it seems a little odd they’d chase another right-back having signed Sam Byram from Leeds in January.

We’re going for a viscous seven on the poo-o-meter scale:

They can have him. No fee required. Just shut the door on your way out!

You need to eat more fiber my friend

One thing’s for sure, he ain’t going to be an arsenal player next season! Shame for him how it all worked out here, but there’s no doubt he could have handled it all with a lot more dignity than he did. Bellerin + Jenko our RBs next season?

There were a lot of people saying that should have been the case last season. It was obvious he was second choice to Bellerin after the way Hector finished the 2014/15 season – it would’ve been better to cash in at the time before it was made obvious how cack Debuchy’s attitude is (and he hasn’t done anything to show he’s great ability-wise this season, either).

Lots of youngsters have problems in their second year, so he was probably kept ‘just in case’.

lol.
I’m surprised any premier league team, especially one with some ambition now like West Ham, would want to take Debuchy. He’s proved he’s totally wet and not up for a fight for his place. If they want him though, that’s fine by me!

It seems like the done thing to link players with West Ham this year. They have taken over our mantle in that regard. Taxi for Debuchy in any event.

Maybe he wants to play in the Olympic stadium so he can pretend he’s representing his country?

Made a bit of a tit of himself really. No spirit, just gave it up. Take a leaf out of Gibbs book mate. Fair enough he will possibly move on also but at least he has the class to keep his head down and do his job to the best of his ability.

PodB
Reply to  Easy as JVC

Gibbs was immense in the 2014 FA Cup final 3-2 barnburner over Hull … heading off the line to stop us going 0-3 down and then missing a sitter before being the first to grab Rambo after his winner and shepherding another Fabianski-madness moment shot away from danger.
I predict he will score the winner in extra time in the Champions League final v Spurs next season. For us.

I didn’t know that we played spectators for fun in extra time in Champions League finals!
As long as we thrash anyone on our way, I wouldn’t complain.

I’m so glad to read this; Gibbs has been one of my favourite players for a couple of years because he gives his all and never gives up (or whines). Why Wenger doesn’t rotate him and Monreal more is beyond me, Monreal good as he is looked knackered by the end of the season. Hope he stays as Monreal is now 30 and will only have a couple of years left 🙁

Sp*rs and Champions League final in the same sentence? You sure mate?

Yeah, never happen.
Even if they were to get to the quarter finals and rack up a massive first-leg win, they’d still manage to lose the 2nd leg 0-27 and go out on away goals or something…..

Gotta feel sorry for whatever club takes him, three games on the bench and he will start whining like a little bitch because he wants to make his Magaluf 2017 beach football squad.

Hopefully, we will get a fair price for him. At least somebody is interested. Thought we would have had to loan him till the contract expires. A small part of me does feel sorry for him, but ya.

His was a signing that I was really excited for (as much as can be for a RB) and I was genuinely gutted for him after his injuries. That said his attitude has been horrible and shameful since having to actually work and fight for his place with Hector. GET HIM OUT MOVE HIM ON!

Here I thought Byram was a left back…learned something new today too.

I still have a hard time understanding the hatred towards him. A fit Debuchy will provide West Ham with a very decent defender and regardless where he goes I wish him well.

The ill feelings for Debuchy are pretty understandable. We needed a unified front and this guy who is paid a whole heapum to compete threw a hissy fit instead of fighting for his spot.

He wanted to play and he moaned. In then end it got ridiculous when he was on about holding out for Man U or whatever fucking delusion he was under. He then got some French club that doesn’t matter to us. Big deal. I still fail to understand this vitriol and the fact remains, a fit Debuchy is a more than decent defender for anyone to have. Either way, he came and got injured, it didn’t work out, he moved elsewhere and more than likely won’t be back. Like Trez says below, we have much more stressing matters than Debuchy.… Read more »

The hatred comes from the fact that he shat on something we would all die to have the chance to do, play for Arsenal.

I don’t have much concern for him either, but I can understand the vitriol. He gave us a big fuck you, so he can fuck off too for all I care.

Debuchy is a great rb when fit and in form. He was clearly frustrated at the thought of not making the euros. It was understandable that he needed a loan to go get some games under his belt. Considering Jenko’s injury, I don’t mind if we keep him. We have other urgent positions to spend money on. Chambo will be better served as a cb.

Seriously Joel, get out

Taking walcott and debuchy for us? You hammers are alright

Gosh this guy is still here?

I mean if you were another teams manager, would you want his attitude anywhere near your squad?