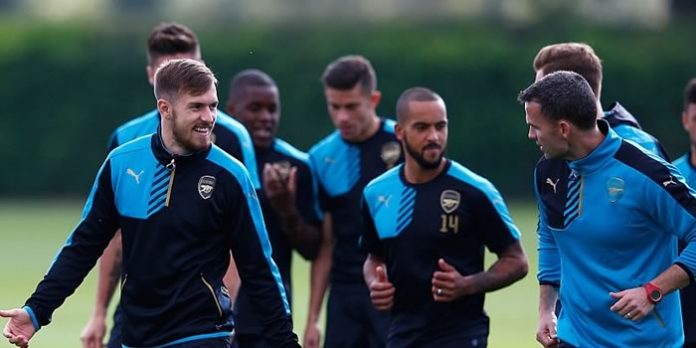 As one season draws to a close, so the planning for the next campaign begins.

Of course, between now and the 2016/17 Premier League kicking off on Saturday 13 August there’s a whole lot of football set to take place.

If you wanted a break from the ‘beautiful game’, you’re going to have to go out of your way to get one. Here’s what’s confirmed so far…

The Toulon Tournament
South France
18-29 May

So what does that mean for the current Arsenal first team squad?

We reckon everybody in the far right column(aside from Alex Iwobi if he’s called up to represent Nigeria in Rio) should be available when pre-season training gets going in the first week of July.

Who else could be involved?

Well, not Mikel Arteta and Tomas Rosicky who’ll be leaving. We’re also taking it for granted that Mathieu Flamini will follow suit when his contract ends in July. There are also long-term doubts about Messrs Ospina, Walcott, Campbell, Sanogo and Gnabry.

As is often the case in pre-season, there’s a fair chance a few youngsters will be given the chance to shine with some senior players given an extended rest. Matt Macey, a regular on the bench, could provide back-up in goal, while the likes of Krystian Bielik, Gedion Zelalem and Jeff Reine-Adelaide will be chomping at the bit having already made their first team debuts. Jon Toral, voted Birmingham City’s player of the year while on loan, will hope to be part of the USA tour as he was last year, as will young Chris Willock, star of the under-21s this season. No doubt a few other Academy stars will be looking for a piece of the action too.

Your guess is as good as ours at the moment. The boss has spoken about his desire to add three players to the first team squad. Granit Xhaka’s arrival  has been confirmed and we’re almost certainly on the lookout for a top striker to bolster an attack that will be without Danny Welbeck. Expect a couple of young prospects to arrive too; Celtic’s Kieran Tierney and Bolton’s Rob Holding have both been linked.

When’s Granit going to be announced officially? Getting a bit worried here. We ARE Arsenal afterall

Glad we don’t have to play any CL-qualifiers. With a thin squad on the back of two major tournaments, qualifying could be a lot harder than usual. Let’s see how $hitty will manage it.

Is Granit involved in a summer tournament? Also is Morata (if there is any truth that we are after him)?

Finally, is Jenks injured for a long time (I think he is a decent back-up to Hector)?

Xhaka will be at the Euros with Switzerland.

Morata has been called-up by Spain.

Jenkinson will probably miss the first month of the new season (at least). Cruciate damage sustained at the end of January required surgery.

Toral is my bet to step in and up, was great for Birmingham according to a Brum fan I know and is from the same stable as Hector so good control and passing, plus will encourage Hector if he is there. Also is a six footer so can cope with the physical side.

What do we prefer, our players in the tournaments to be knocked out early or come back with a trophy?

Trophy. It’s a habit they need to make, and frankly whether people are rested or not our team goes to pieces by January anyway.

Ospina is probably out, there is a clue on it on Arsenal shop (you cant buy his shirt). Debuchy too (same). You forgot about Wellington Silva, who I believe is in his last year of contract and could get his last chance along with Sanogo (or get shipped out). For one I’m looking forward to the friendlies and seeing our attacking prospects stake their claim before the main stars come back. In addition to that we’ll have full defence (Koscielny aside), Coquelin, Cazorla, Ox and Walcott fully rested and Alexis relatively fresh (he’ll have vacation from 26 June at latest).… Read more »

Blogs, you have Joel Campbell appearing in 2 columns- Copa America and holiday.

Man blog,
I mean I know you guys aren’t big fans of Wellington Silva and have effectively written him off (making him the prime candidate to a Coquelin and Campbell for a perfect third strike), but at least acknowledge the boys existence. Haha.

I expect Silva to have a stormer of a preseason and for blogs to say they always believed in him. 😛

Neither has Zelalem, Macey or Toral (or Jeff, I think), but they still got a mention in the hopeful paragraph.

I was just joking anyways.
Semi-joking.

I have to think Zelalem will be involved in a preseason trip to the US.