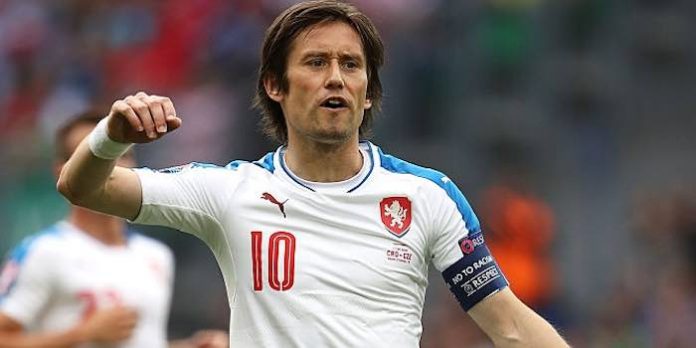 In the latest of our Euro 2016 updates, it looks like it’s bad news for Tomas Rosicky despite playing a key part in helping the Czech Republic come back from 2-0 down against Croatia.

The 35 year old provided a delicious outside of the boot assist to Bob Skoda whose powerful header made it 2-1 on the night. A late penalty secured a point for the Czechs, somewhat offsetting their late defeat to Spain in their opening game.

Sadly though, Rosicky pulled his hamstring as the game wound down. With nobody near him he fell to the ground clutching the back of his thigh, and it probably means his tournament – and possibly his international career – is over.

Still, it was quite an assist, as you can see.

Petr Cech played and conceded twice but the late goal means they have a chance to qualify if they beat Turkey in their final game.

There was no real Arsenal interest in the other games, although there were some former Gunners on show. Cesc Fabregas played in Spain’s 3-0 win over Turkey with Hector Bellerin an unused sub.

Kim Kallstrom and Seb Larsson played in Sweden’s 1-0 defeat to Italy in which Zlatan Ibrahimovic did nothing. It’s almost as if he’s been playing in a powerhouse side against bang average teams for the last few years or something, and finds it more difficult when you face decent defenders.

Maybe that’s just us though.

What a pass Tommy!!! Missing you already

Poor Tommy indeed, at least a superb last performance if so. On another note, Zlatan Ibrahimovic – what a twat

Can’t wait for Zlatan to sign for united and become Falcao.2

Even though I don’t want him to sign for United, he will have significantly better providers there than yesterdays appalling Swedish midfield and wide players…

But he’ll still only put in a ‘shift’ in their big games.

In a way Tommy’s performance yesterday summed up his time at Arsenal, brilliance, verve and enthusiasm curtailed by his own physical frailties. One of my favourite players, right from when he was bossing the midfield at Borussia Dortmund. It is a real shame we release him this summer, but it’s the right decision, as much as it pains me to admit it.

In the words of Ozil “Rosicky is among the very best”. That and the fact that ageist Wenger gave him a contract extension at 34 says all we need to know.

I already miss him. 🙁

No Copa Americas watch? Ospina’s penalty save was something else!

Perhaps they are in holiday mode, I dont know.

Messi hasn’t looked too bad recently. The hat-trick in 14 seconds was okay.

Or in other words, the rest of that powerhouse team isn’t really all that great – they’re simply a collection of all the best players in a very average league.

I really love positivity on the pitch. Another player with that same positivity is Coutinho, Liverpool hit the jackpot with him.

The story of his life, unfortunately.

At least Hector is getting a good rest! How did Morata look yesterday?

Such a tragedy that Tommy was never able to stay fit. Had he been able to do so, and held down a regular place over a sustained period, perhaps our trophy drought may not have been as long as it has been. He was a genuine game-changer. Dejkume a na shledanou Tomas!

Arseblog posted a link to a Rosicky “best goals” video, and watching it I noticed a couple of wonderful interchanges with Diaby. Made me sad about both of them.

If both of them had stayed fit, recent history would be much more glorious. What a crying shame…

I’m sorry, but I”ve got to say to Arseblogger:

I can’t stop laughing uncontrollably when I read the headline…and that has me real conflicted because I feel like I’m somehow laughing at TR’s unfortunate plight…or maybe I’m just going insane..

Damn you all to hell, Arseblog!

When Riquelme was at his prime at Villareal, and they came to the Emirates and bossed us around, Rosicky turned them inside out with surprise shots and crazy through balls. And that’s how I started loving him.

I did find it rather strange that he’s played less than half an hour for Arsenal all season, and was even unable to make a final 5 minute farewell stint, yet he could come out and play almost a full 90mins just a month later…. Sometimes players need to be protected from themselves, and maybe the Czech Republic just didn’t do enough of that…

We wish you the best TR7