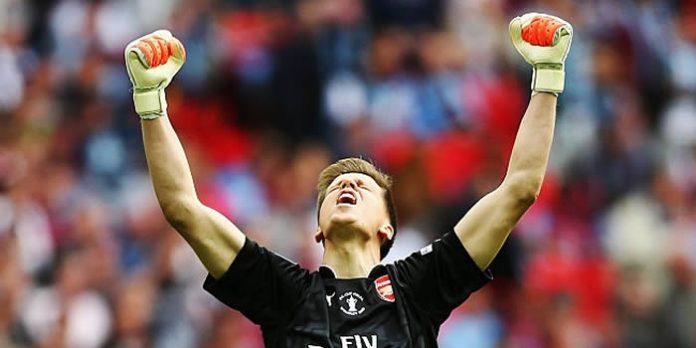 It looks as if Wojciech Szczesny’s chances of a second loan spell at Roma are dwindling after reports this weekend that Arsenal have failed to agree terms with the Italian club.

Despite stories last week which said Roma would pay the full amount of Szczesny’s wages plus a loan fee, The Guardian say that the Gunners have yet to receive an acceptable offer for the Polish international’s services.

It might also be that Arsene Wenger wants to keep Szczesny to ensure his squad is as strong as possible next season. With David Ospina’s stock on the rise due to the quality of his Copa America performances, the Colombian number 1 will have clubs to choose from if, as expected, he decides to leave the club to play first team football.

That would leave Arsenal in need of back-up to Petr Cech and Szczesny would certainly be a good option in that case. Right now though, the 26 year old is concentrating purely on Euro 2016, saying, “Arsenal and Roma are talking but I don’t want to worry about it now.

“Whether I’m an Arsenal player or a Roma player right now, it makes no difference to me. I want to focus on this tournament.”

He missed Poland’s last game against Germany due to a bruised thigh, but could come back for their final group game against Ukraine tomorrow night.

Ospina deserves to play first team football. Unfortunately he can’t do so at Arsenal due to Cech.

However Szczesny is more than a decent backup.

So, either we split duties as league and cups like we tried (and failed). Or look for a different solution.

I hope Szcz goes back to Roma to play and learn regularly. So a season later he is genuine competition to Cech, rather than wanting leave after a season sitting on the bench.

I don’t think Szczizzlekicks would try to leave if he knew that after a season he could have a genuine chance of being first choice. He’s genuinely dedicated to the Arsenal, and also to his professional duties as a goal keepr. Also it seems like a season at Roma really cooled him off and matured him, and I would absolutely love to have him back. I’ve always rated him highly, and now with some more maturity and experience, I feel like he can have a proper balance of madness and efficiency as a keeper. Another season at Roma might be… Read more »

One season of good behaviour, does not make him a model professional.

Definitely not, but how he handled everything, from being dropped, to his move to Roma, and how he approached his season there… To me, it’s indicative of how much he wants to stay with Arsenal. Also, how he spoke in support of Wenger’s decision to loan him out, how the Roma fans have warmed up to him, and most importantly, how he worked on his goalkeeping with real earnest. They might be steps, but they are all the right ones. He has a real natural physical ability to be a top gk. Seems to me like his mental fortitude is… Read more »

Ospina can play first team football at Arsenal…and I want him too. Just need Arsene to be creative with his choices. For example, I suggest Cech first choice for BPL games, Ospina on the bench. But for Cup games, the reverse takes place. Why not? IIt’s a very long season and usually we are involved in many games…So what happen if Cecb gets injured? Im more than happy & confident to have Ospina steps in his place

I think Chez will surprise people. Cech is no doubt world class, but as we’ve seen last season, he’s not infallible. I think many will be surprised at Chez’s development, particularly his improved distribution and command of the box, as it seems he’s been getting better goalkeeping coaching in Italy (don’t shoot the messenger, I’m just relaying what I’ve heard and seen). I think he’ll do a Coquelin and there may be a period where Cech is injured and Chez comes in and performs so well he becomes undroppable. Either way, better position to be in compared to the Almunia… Read more »

Will be gutted if Ospina leaves. He is an amazing goalie, who just got a bit unlucky at Arsenal.He deserves to be playing week in and week out for sure.
Szczesny is not a bad back up option anyway and boy is a Gooner out and out.
Wouldn’t be half as bad to have him back.

Chezzers back I hope. I’d like to see a 60-40% with Cech as main. Two great goalkeeps. Keep em both playing and hopefully Chez picks up a thing or two from Cech. Let the young giants we have waiting in the wings learn from both to pick up some mad skills.

I like all our keepers. They’re all mine I tell you. MINE

Scz did ok at Roma, a few high profile blunders similar to his Arsenal days, but at least no particular off the pitch troubles. Otherwise pretty solid, with a smattering of really good saves.

Re: the improved behavior, I think it’s his new haircut, he looks so clean-cut it’s making him act that way too.

I believe that Ospina will not move. Arsenal has room for a quality backup keeper to push Cech. I also think Szczesny wont push Cech because he not as developed, yet. There were suggestions (on Arseblog) since last year that Ospina would move ( loan or sold) to make room for Szczesny. It would happen this time either. I think Wenger appreciates that quality Ospina brings to the team and more than the funs, is not sentimental about Szczesny. TBH without sentiments, Ospina is far better keeper.

GK is probably the only department where for the first time we have real strength in depth.

I discount our midfield because half of the players playing there are permanently injured.

I thought it was sealed that Roma had secured Alison of Brazil and had to relieve Scszezny of duty. Maybe I’m mistaken?

Yes, but Mary and Joseph managed to stay at the inn regardless, albeit in the stables.