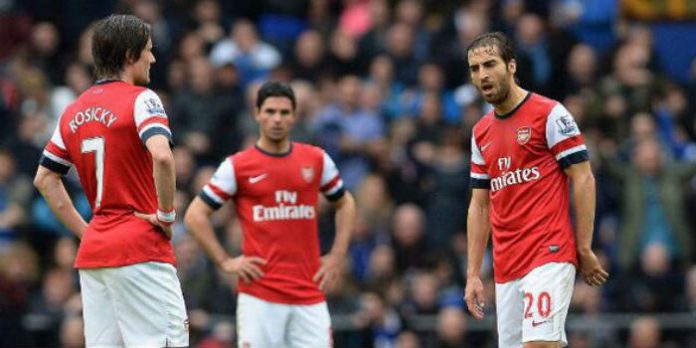 As of today Mikel Arteta, Mathieu Flamini and Tomas Rosicky are no longer Arsenal players.

Between them, the experienced trio made 650 appearances for the Gunners scoring 56 goals. They will be missed.

Here’s one final rundown of their stats as we bid them good luck for the future.

Role: Club captain, midfield metronome
Signed: 31 August 2011
Spell: 1767 days
Appearances: 158
Goals: 16
Hairstyle: Dependably Lego
Highlight: Captaining the Gunners in the FA Cup Final at Wembley as we ended our 9-year wait for a trophy.
Unknown fact: Arteta once fined himself £300 for asking Arsene Wenger to ‘paint him like one of your French girls.’ He reneged on payment when it later transpired his drink had been spiked by Lukas Podolski.
Last seen: Sending rotten fish to members of the Goal Accreditation Panel.

Role: Aggressive pointer extraordinaire, dressing room intellectual, climate change activist
Appearances: 246
Signed: (1) 22 July 2004 / (2) 29 August 2013
Spell: (1) 1384 + (2) 1038 = 2422 days
Goals: 13
Hairstyle: Freshly ruffled by Mesut
Highlight: Spanking in a 25-yard volley to seal victory in the League Cup against Sp*rs.
Unknown fact: Mathieu is completely blind in one eye, a state of affairs he hid from the Gunners doctors by being great at pointing at stuff.
Last seen: Shouting at Mount Etna for no apparent reason.

Role: Scorer of goals against Sp*rs, midfield dynamo, metalhead
Appearances: 246
Signed: 23 May 2006
Spell: 3693 days
Goals: 27
Hairstyle: Ripe for a headbanging
Highlight: Robbing Danny Rose on the halfway line and dinking the ball over Hugo Lloris in the 2014 FA Cup 3rd Round.
Unknown fact: Tomas commissioned an exact replica of Arsenal’s contract dungeon room for his home and regularly spends time in it practising his signature.
Last seen: Tying his hamstring back together with the really stringy fat off a pack of smoky bacon.

I love them all. Good luck in the future.

Get them in for the legends match

Bank of friendship
Reply to  Ross

All three were fantastic servants, often troubled by injury, who understood what the club was all about and always played with their hearts on their sleeves. Best of luck to them all, especially Flamini, who is going to save our planet!

My hero Rosicky goodbye, hopefully he gets the testimonial he deserves and good luck to him, Arteta and Flamini in the future. Love all three great figureheads for the club. Maybe one day Mr Flamster will buy the club and play himself again (looks like the type of geezer to do it) and make Arteta the manager Henry/Bergkamp assistan after Mr Arsène and Steve Bould retire. Once again goodbye and good luck in the future. Those three gooners always played their heart out for the club and knew what the jersey meant to the fans. #OnceAGoonerAlwaysAGooner #TR7 #EmiratesEraLegends #Goodluck

They will be missed, but never will they be forgotten!

I will remember yoouuuuu, will you remember meeee?

Can’t help but wonder what Flamini would have achieved with us had he stayed and not gone to Milan.

Nope, not in a pointing competition he won’t!

If only we’d signed Arteta 3 years before; Flamini hadn’t left first time; Rosicky hadn’t had so many injuries.

And they gave us 110% against Spùrs

It’s 2026. Arsenal skipper Arteta declares the Gunners hope to remain champions of Europe for a third year running. He attributes much of the club’s success to the foundation laid by his title-winning predecessor Thierry Henry (now playing James Bond in the holographic movies). Of course, the constant pointing and shouting from the owner’s box is a bit annoying but how can you complain when he is always willing to spend what is needed? Plus, he did save the world and that.

Is it true that we’re retiring the Arsenal contract dungeon room in Tomas’s honour?

* insert own “no, it’s just that we’re not signing anybody” joke here *

I liked Tomas’s THWACKED shot vs Spurs in the league (either last season or the one before) over his dink. we won 1-0 and i creamed myself with giddy joy

eddymc2
Reply to  the american

More than any of the goals in the first 5-2, I love Rosicky’s celebration after scoring our go-ahead goal.

“All things must pass”, and all that but I’m genuinely gutted to see the three of them go.

Best of luck for the future, lads. Once a gunner, always a gunner.

Will miss them all, but I wonder why flamini was not given a proper sending off, like the other two

CechedOut
Reply to  Not Mark Strong

It’s possible the club was thinking of keeping Flamini but didn’t make their decision till later on.

GL
Reply to  Not Mark Strong

All been great servants to the club, will still follow them to see where they go.

Rosicky: 27 goals in 10 years?
And I thought Walcott was swinging the lead.

Yeah but Rosicky put a shift in every game he played. Never seen an attacking midfielder so good at grinding out results. It’s no coincidence that that crucial winning streak in 2012 when we came from behind four matches in a row coincided with one of Rosicky’s longest runs in the first team. He’s not stats, he’s an old school grafter who got stuck in.

Rosicky is also not a winger who thinks he’s a striker. He’s a midfield playmaker.
A farewell tribute and that’s what you go for?

Rosicky showed in the Euros that he’s still a great player. Then he got injured to remind us all why he can’t stay. Very sad to see him go.

It seems like whoever wears the 7 shirt scares the crap out of sp*rs.

The good, the bad and ugly to s*prs fans! Great tribute blogs, true servants of the arsenal. Great memories and making us proud of the red and white…

Rosicky and Flamini made exactly the same number of appearances? Weird.

Arteta – MASSIVE contribution to the club!Was pivotal when he was signed by Arsene to anchor the midfield in a new deep lying role and hold a ship which was severely listing from lack of experience. Along with Per, it took the pair five years of perserverance as Wenger sought to rebuild the squad amidst continual exits for 3 seasons odd by his top assets. A very important player for us. Mr Unflappale (hair particularly). Hope he returns in some sort of (proto) management capacity Rosicky – Blighted by injuries as any good Arsenal player, the last of the great… Read more »

Coming from same country as Tomas and watching him with Nedved & Koller closely 10-12 years ago brings my admiration to different level.. but watching that vid was as painful as wonderful.. knowing that we dont have anyone like him anymore in the squad to smash it or just simply shoot when we’re 20m from net is hard to digest

Would love to see tomas stay in the league, absolutely love watching him. And imagine the reception he’d get when he came back to the Emirates

It’s always a bit rough seeing the sun set at the top level of a career, especially for those who gave all they had whenever asked to. They deserve well wishes.

And a special shout for Tomas whose career interruptions were so undeserved; yet back from each one his quality was immediately apparent.

Rosicky and Diaby, fate can be so cruel. Two absolutely fantastic players who could have dominated the league if only they had been able to stay fit.

At least Rosicky always seemed able to summon up enough fitness to single-handedly smash the sp*rs at least once every other season. What a fantastic guy.

Good luck to the chaps love them all.
My chimney needs re-pointing anyone got Flam’s number? 🙂

Tomas Rosicky- fucking magnificent. That fourth goal against spurs at home will always be one of my best memories. Farewell, super Tom. And thanks for the great moments.

He’s busy working on science that will make your chimney obsolete.

Well I hope he hurry’s up…

Ironically both Flam and Rossa have the same amount of appearances

Rosicky is a legend, respect to Arteta and Flamini, i wish them all the best in what ever field they wish to explore, already thinking of Arteta as a coach

With that hair and composure he’s got to be parading the touch line for a long time to come.

Goodbye to the 3 musketeer’s you will be fondly remembered throughout the years to come !

Flam will just be outside waiting for mesut the whole time

One is the future manager of a major club in europe, one the savior of the planet, and one is just plain unlucky.

Thomas has also made a public service announcement educating the public on what the worse thing about London is. You always want to avoid ? wherever possible. Thanks Thomas!!