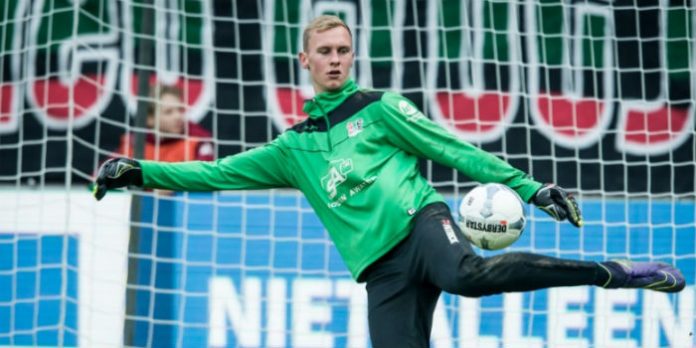 The Gunners aren’t exactly short of keepers at the moment with Petr Cech the outright first choice, Wojciech Szczesny and David Ospina battling it out to be number two, Emiliano Martinez back from his loan at Wolves and youngsters Matt Macey, Ryan Huddart, Deyan Iliev and Hugo Keto waiting in the wings.

That said, it’s not unusual for Arsene to invite players to London Colney at this time of year.

On occasion these young hopefuls get a run out in first team friendlies – see Yaya Toure, the Egyptian defender Ahmed Fathi and that chap with the headband who now plays for Colombia. Others, like Kolo, are handed deals immediately.

We’ll keep you posted on any developments. And yes…we think that may be a new low for our headlines.

Ornstein: Koscielny not stripped of captaincy…yet

Not to mention Ryan Huddard I believe

The paragraph repeats. A bit like our yearly transferlull phases.

Trying to hit the word count on your Arseblog homework?

I felt a distinct feeling of deja-Vu reading this article. Strange.

I felt a distinct feeling of deja-Vu reading this article. Strange.

Are Matt and Ryan brothers?

Apologies, there was a glitch in the Matrix.

Argh!! Don’t fix it – the original Matrix didn’t work because it was faultless. Besides you’ve rendered our pithy comments totally meaningless

Ha! The two clubs I love in one article, Arsenal and my local club NEC. Nice one. Don’t expect anything special from this guy, didn’t get a contract here. Never saw his play though, he only played in the u21’s. But who knows, wish him all the best ofcourse.

Apparently he’s highly rated. Would be third or even second choice if Ospina, Scz and martinez all leave.

Highly rated… but released by Nijmegen!!! I see Sanogoals 2.0. Not trying to be damn pessimistic, but surely this can’t be that exciting. That said, if we sign a striker (a strk better than asano, that is) and a center back, who are both world class, then I won’t be complaining!!!

But if he’s not a 30 goal a season striker in his prime we should be outraged by this right?

I’m sure some people can spin this news into a negative spiral theme.

Perhaps we should try playing him there and see what happens.

Zlatan does not do trials