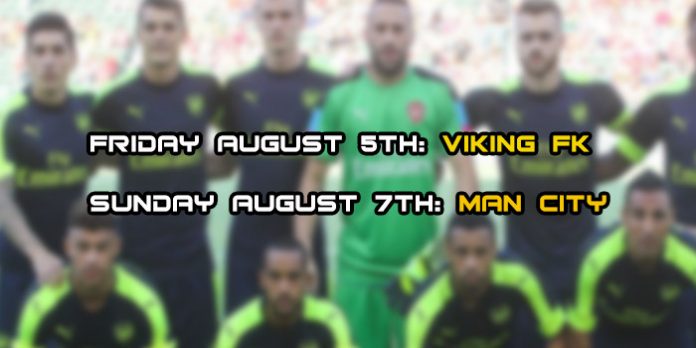 Arsenal have announced their travelling squad for the games in Scandinavia this weekend. The Gunners play Viking FK at the Viking Stadion in Stavanger, Norway, on Friday August 5th, before facing Man City on Sunday August 7th at Ullevi stadium in Gothenburg.

Alexis Sanchez and Aaron Ramsey take part for the first time since their summer exertions, but Jack Wilshere misses out despite Arsene Wenger saying he was hopeful the midfielder would shake off a knee injury picked up in the US tour.

The full squad is as follows:

???? Here’s our travelling squad for Scandinavia

Hopefully Wilshere is just being rested as a precaution…

WTH that boy Alexis should be resting. lol someone please put him in chains.

Good to see Cazorla is there! In all likelihood with Ramsey, Elneny, Xhaka, le Coq, and Cazorla fit Wilshere probably wouldn’t have started the Liverpool game anyway so it makes sense not to risk him given his history

I have a bad feeling about Jack…

Everyone does. All seems very familiar…

I just cannot believe we havent signed a defender before this tour. Our lack of urgency is becoming a joke.

I’ve just come back from a two month holiday.
Why have we left Vardy out of the squad? We haven’t injured him already have we? Still, good to see some new players, oh, hang on, wait a minute….

Ramsey last game played: 01 July 2016 Rest period: Over a month Alexis Sanchez last game played: 26 June 2016 Rest period: Over a month (almost 40 days) Santi can play. He just cant play a full 90 minute competitive game. Gabriel and Chambers had to play Liverpool with a few minutes notice after both our first choice centerbacks were injured right before the game last season. Im sure they can do just as well if not better with a few weeks head start. No player is being rushed back. No injury will destroy our team. No sale of a… Read more »

I’d feel more comfortable with Holding and Chambers starting against Liverpool. Gabriel is just too unpredictable.

How long is a player supposed to rest? Saw Messi play against Leceister the other day.