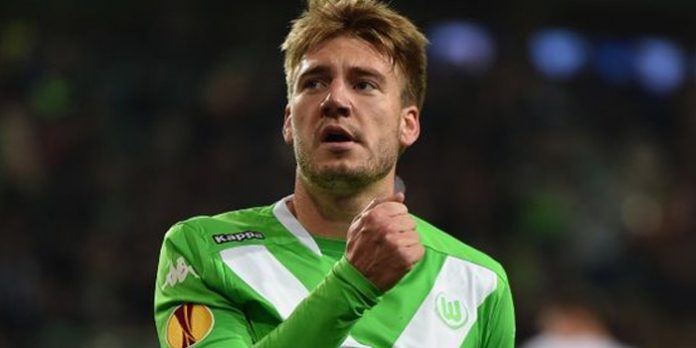 Former Arsenal striker Nicklas Bendtner has signed for Nottingham Forest on a two-year deal and could face the Gunners when they travel to the City Ground in the third round of the EFL Cup.

The Dane has been on the lookout for a new club ever since Bundesliga side Wolfsburg terminated his contract in April following repeated breaches of their code of conduct.

Against the backdrop of his stuttering career Bendtner has fallen out of nightclubs, been fined by UEFA for sporting dodgy sponsored pants, married a Baroness, written off cars, been banned from driving, hung out with Lee Cattermole, been arrested on suspicion of criminal damage, frotted a taxi, posed for a plethora of stupid photos and indulged in all manner of other silliness.

It would be funny had it not come at the expense of Nicklas’ own lofty ambitions. In 2009, aged 21, he said he’d better the career of Zlatan Ibrahimovic.

“In about three years, I will be better than Zlatan,” he told reporters before a crunch showdown between Denmark and Sweden.

“He is older than me and has now reached his peak as the top scorer in Serie A – but I have a plan, I believe in it and I am ready.”

Nottingham Forest will be Nicklas’ fourth English club; during his ten years at Arsenal he spent time with Birmingham City and Sunderland on loan. There was also an injury-hit season with Juventus.

We share the sentiments of the Arsenal social media team, who tweeted:

Good luck at @NFFC, [Lord] @bendtnerb52 – apart from on September 20 of course pic.twitter.com/qEVQ7sO7ZY

The Frenchman played 24 times for the Gunners last season and turned a few heads when he single-handedly beat Sp*rs at White Hart Lane with a dashing brace in the League Cup.

“Mathieu is a player I am looking at, yes,” Pardew told local media. “He would give us a bit more experience to winning games.

“I like the fact whenever he played, he played in the big, big games at Arsenal when they needed someone to kind of lead the team over the line and get big results.

“His age, 32, in my mind I signed Teddy Sheringham when he was 38, so the age isn’t a problem for me. I think his experience is something I am looking at, yes.”

Comparing Flamini to a total c*nt like Teddy Sheringham in a bid to lure him to South London…a classic Pardew chat up technique. Beware Mathieu.

Thumb me down if you want, but I quite like Teddy.
He has always taken the abuse from us well imo.

“He went to Man United and won fuck all”…cough…cough…and he never rubbed our noses in it!

afraid I started following footie a little after Teddy’s best days. Can someone explain why we hate him so much as Arsenal fans? Is it just the Man Ure thing?

And he played for the scum. Used to give it some to our fans, in general is just a bit of a see you next tuesday.

Check out his previous clubs…

No it’s also the Spurs thing. He was a spurs cunt before becoming a manc cunt at a time when the Manc were our most rivalled cunts.

He also rejoined Spurs to add to his majestic cuntery.

Meanwhile in Manchester, Zlatan is green with envy.

Zlatan might have a £200k per week contract, but he won’t have his own bloody forest.

That’s a killer. Lol. Made my day

Question is, will Zlatlsn retire with more or less EPL goals than Nicky B

He scored 6 seconds after coming on against Spurs, I was at the Emirates.

For that I’ll forgive his many other failings and the fact he wasted a potentially great career.

To think, lord B’s career started after a successful loan to the Championship. Yet here he is at the peak of his abilities…..back in the championship.

Saw Lansbury and Lord B playing together, ripping up teams… hmm not quite what ……

TGSTEL: Tell Barcelona and Real Madrid I’m avaliable.
Agent: Erm….. What about Notts Forest?
TGSTEL: Are you f’ing kidding me?! I am TGSTEL. I am better than Zlatan. Better than Messi. Better than Pele. What on earth are you thinking you useless tool?! You’re fir…..
Agent: They’re playing Arsenal in 2 weeks.
TGSTEL: Where do I sign?

So, there’s that then. Another former Arsenal player who will show the form of his life against us. All hail Lord Bendtner!

“In my mind, I signed Cunty Cuntingham when he was 38…”

What does that even mean.

A Gorilla
Reply to  beNZed

I love how even in the shallow pools of Pardew’s imagination, the best he can do is sign a 38 year old Teddy Sheringham!

I’m the mind of many journalists, we signed Sebastian Frey.

And in my mind, I signed Messi. Wow, I guess my ambitions aren’t as lofty as Pardew’s.

It means “I had fuck all other options so I signed this way over the hill 38 year old player who failed to set the world on fire”.

The story of TGSTEL has to be one of the saddest ever. He could’ve been something else entirely if his attitude had been on point. Probably not as brilliant as Zlatan but should’ve made more of a career with his talent. Sigh – could’ve , should’ve.

Ah shit! Hat trick for TGSTEL to knock us out.

Yes Alan,
I will consider consider joining your club and watching you make a tit out of yourself,
but only if you first make yourself available for some biochemical experiments for my company in Italy………

The Lord is back

Why weren’t we in for Bendtner?

Reallg find the whole bandwagon of slagging of big Nick pretty tedious and boring now. He’s not as bad as people make out, and it particularly annoys me when Arsenal fans slag him off, because anyone who hates Adebayor and scores a bullet header against sp*rs deserves a bit more respect, even if his career hasn’t progressed as he, and we, would have liked.

It’s a shame really, he is the poster boy for wasted talent. I dislike him thoroughly because of it.

And I liked his St Totteringham’s day tweets this year. Hope he do well this time.

His hubris and off pitch antics have cast Bendtner as bit of a joke character. However, whilst he might not be the greatest, he has scored one or two important goals for Arsenal over the years and we’d do well not to entirely underestimate him on the 20th, which would be a typically Arsenal thing to do.

“Someday I’ll be better than Zlatan”. That’s what I tell myself when running around the pitch, sweating out the IPA on a Sunday.

As long as it’s not one of us, and especially not Wilshere.

This from the Sunderland night arrest report from 2011:
“Cattermole who was probably just trying to get into a taxi but arrived just a couple of seconds late.”
Classic.
And in the comments below was fatgooner, laughing. Where is fatgooner?
I feel old.

And, and! The link to the previous story on that page was an update on Wilshere’s return from injury. Some themes are perennial.
By the way, can we bring Wilshere back if he has an injury? I know there is no break clause in the loan, but

No one will be laughing when we bring the Champions League trophy back to Nottinghamshire!

Talking about the Flame… Nice to see Granit in red action!

Those bemoaning the loss of Gnabry should remember Alban Bunjaku Who you ask? He was the bright spark in the academy but left too early and now has ended no where. Gnabry is a little further on but no guarantees even with a sparking tournament that he can make the grade(at Bremen or Bayern) Meanwhile we have others pushing for a spot from academy. With regards Flamini, good to see him still utilise. He is a far better player than many imagine him to be and held firm for us during difficult christmas period last season where we chalked up… Read more »

I think Fran Merida is probably a better example to illustrate your point than Alban Bunjaku, who didn’t get anywhere near the Arsenal first team. There’s a really good interview (I think on Eurosport) where he talks about regretting leaving us.

Honestly, I’d love to see him make good. Score 16 in the first half of the season with Forrest, and transfer back to the Emirates . . .

Paul
Reply to  Daniella No. 9

Bring back TGSTEL and Frimpong.

Why don’t we also bring back Chamakh, Eboue, Gervinho, Santos, and Almunia while we’re at it

If they sign Lupoli and Anthony Stokes, they’ll win the championship, FA cup and league cup. Sadly for us.

TGSTEL is the footballing equivalent of Chuck Norris. Even Chuck acknowledges this.

No.
Chuck Norris in the Martial Arts equivalent of TGSTEL

Side note. How do you just not work for 6 months? The concept is foreign to me.

Bendtner was / is a bit of a bonehead, but I never got the sense of his having an element of venal, a la Vardy, Rooney or Terry.

His biggest crime was not being talented or fast enough to score against Barca, and he’s borne the weight of Arsenal disappointment ever since. Good luck, TGSTEL, except against us.

Whatever he is now, Lord Bendtner was a Gooner. He even played out wide for us.

How I miss TGSTEL. Those pink boots… Just dashing.

TGSTEL and got himself a Danish princess. Not half bad. Good luck to you boy!!

Say what you want, but this guy did have the ability to be top class. His positioning and movement was great. He always got into scoring positions, just lacked the composure at times. It’s a shame his career has gone the way it did. Think he was unfairly treated after that barca miss. Also feel we shouldn’t have bought Chamakh as bendtner was superb the season before where he kept us in the title race when we had all those injuries.
He certainly had the tools to be a complete striker. Oh well…

…but unfortunately, he just turned out to be a tool.

I remember him scoring some important goals as substitute. He was really good before Chamakh joined us. Still remember that jumping header against Spurs.

I was there for his hat trick against Porto. I have five pounds at 120/1 on Arsenal to win 4-0 with Bendtner scoring first. Would have won 600 pounds, if he’d just missed that damned 94th minute penalty …

you’d have been a hundrednaire?

What’s the Be(s)tway to break it to Bendtner?

How he made it this far in the first place is beyond me.

Bendtner honestly never had as much potential as some here are making out. Even if he was more serious he would have been at best an OK premier league striker. Basic things like his touch n composure in front of goal were off, so let’s calm down.

Ballotelli is a much more gifted player and a better example of wasted talent.