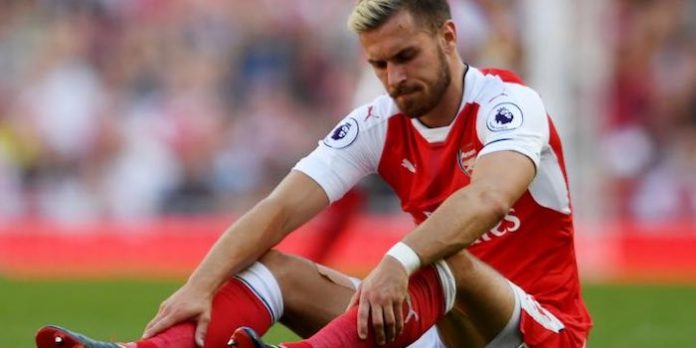 Arsene Wenger says Aaron Ramsey is struggling to overcome his current hamstring problem, and that the midfielder won’t be back until after the next Interlull.

The Welshman complained of an injury at half-time during the 4-3 opening day defeat to Liverpool but was not taken off. Eventually he aggravated the problem to such an extent that he was replaced and hasn’t played a game since.

Asked about his return yesterday the Arsenal manager said, “Aaron Ramsey is still struggling with his hamstring and I don’t think that he will be available for our next game against Basel or at Burnley, so before the break he will not be available.

“We had a few disappointments because he was close to joining again and every time he is not completely ready. Not far, but we have to be cautious with him.”

Arsenal play FC Basel next week in the Champions League before a trip to Burnley in the Premier League on October 2nd. After that there are international games, so hopefully Ramsey will be ready by then.

I’ll never understand why wasn’t he subbed at half time of Liverpool game. Was it Aaron’s wish to stay on? or did Arsenel feel it’s not that bad? Really confusing.

Had he come off then, I’m quite sure he’d be back by now. But instead he will have missed 9 games by then.

Unfortunate for him and frustrating for us fans too. A bit too frequent. Good we have the reqd depth to cope.

Can anyone call Wenger and tell him I am ready to sign in January?

Another exciting component to add to our possible midfield combinations.
This squad looks like it’s made a for a European cup run

We can cope without him for a while as long as there are no more injuries in midfield as we’re well stocked there.

I’m frustrated that he’ll miss more national team games though, especially as he complained about the injury but was negligantly not taken off. Thanks, Arsene.

We are so endowed in midfield talent that we can afford not to miss Rambo so much. Let him take time to recover fully. Can’t believe this is said about Arsenal. #COYG!

Makes a change doesn’t it

In the meantime, how easy was Vardy’s decision to stay at Leicester again?

Injury prone, not injury prone … Wenger says no. I tend to forget that massive shift he put in for Wales. Granted, he had time off but he was the only one that had played that started against Liverpool, no? Now I have lost the plot but I miss him. He provides something different to the midfield and wish him a healthy return.

I always feel he looks like he enjoys his occupation with Arsenal but loves his vocation when playing for Wales.

Not surprising. For Wales the team is built around him and Bale. Over here, he doesn’t even get to play in his favourite position. And does a different job and is a smaller part of a bigger puzzle. I like Rambo, I really do. But I think this absence can affect him depending on Elneny, who I feel offers the qualities of Ramsey but is technically better AND he obviously wants to play as a CM (so is more defensively aware), than Ramsey, who sometimes his box to box energy is more so just so he can be involved in… Read more »

Ramsey will struggle to make to bench when fit.

He complained at half time and wasn’t taken off. Bad management, yet again.

You jump to a conclusion but I think it is a fair question. I have heard that repetitive muscular injuries to the same muscle can be problematic because each strain causes scarring and thus makes the muscle more prone to future injury. If that is true, and Aaron has pulled his hamstring many times, then shouldn’t he be pulled off the field at the slightest twinge?

Let Ramsey recover peacefully. He can take any time that’s necessary to get fully fit. Welbeck too. Now waiting for a Xhaka Boom!

Though it’s sad when any arsenal player gets injured, I am loving this time when he is sidelined simply because arsene is now unable to somehow put him in the team citing his energy, effort, etc… and thereby allowing us to field players who can actually play their position with discipline

If Arsene says he won’t be back till after the Interlull, I say put him in a 4-5 week training program. Something a la pre season.

Imagine of we have all our players fit, we can have most of our first teams stars from last season playing the league cup. That’s what I call rotation. A potential triple cupper this season.

Luckily right now Arsenal midfield are packed with options. Though Le Coq was injured yesterday, we still have Eleny or Xhaka. I would still like Ramsey back asap so that Cazorla can be rested sometimes.

if Coquelin is down for a few months, and Ramsey is out for the same; we may struggle a little for depth; especially with Wilshere on loan..