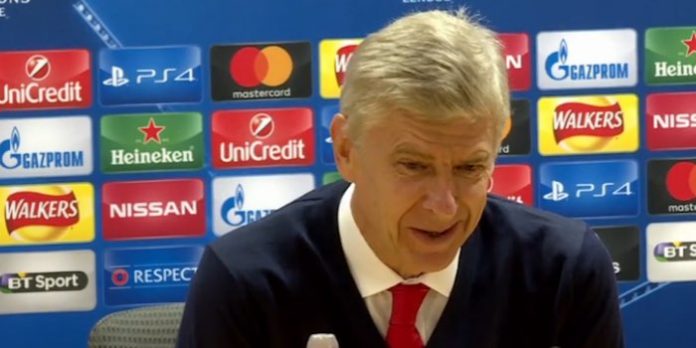 Arsene Wenger has called on his team to retain humility after a 2-0 win over FC Basel last night that saw them play scintillating football at times.

Arsenal should have been out of sight at half-time, creating but not finishing fantastic chances, but overall the Frenchman was pleased with how his team performed.

All the same, he’s sounded a warning to them that they have to maintain this level of effort and not get carried away just yet.

“It was a game of top quality in the first half, the pace and technical quality of our movement.” he said.

“We created a lot of opportunities. I regret a bit we didn’t take enough of the chances we created, but it’s a good basis to have a thirst for more.

“In the second half we eased a bit off, couldn’t score the third goal, but it’s hard to maintain that pace and accuracy in the passing and speed of the game for 90 minutes. The first half was top, top quality like we produced against Chelsea.

“We hadn’t beat Chelsea at home for a few games, and now it looks like we’re playing with full power and pace. Now it’s about continuing to improve. We know we can be better. That will be down to humility, starting tomorrow morning again and focusing on the next game.”

It was a return to the kind of football that hasn’t been seen with enough frequency over the last little while, so fingers crossed they can keep it up.

That’s unfair. I am a massive cunt and I love Wenger.

yeah… where are the muggy ‘Wenger Out’ signs now?

If im honest ,im a cunt, but only when the transfer windows are open

It is very early days but the way the team has gelled is very exciting. The new players are integrating well and we have more options up front with Sanchez settling into the striker role… he was unlucky not to score last night. I hope that we can keep it up. The fact that we seem to have far more strength in depth will hopefully mean we get less injuries and when we do we can deal with them. If that means we don’t hit the skids after Christmas we could be in with a shot!

Wenger back in for a bit thanks.

“It was a return to the kind of football that hasn’t been seen with enough frequency over the last little while, so fingers crossed they can keep it up”…
Very true. I don’t think we have played this well in a long long time.. That is what is encouraging.
Consistency is the key now.

I think the one point that’s not obvious, when Wenger says he is looking at top top quality is the intelligence. While the skill is the obvious attributes that many managers look for, Wenger looks for someone who is good but intelligent enough to work well with others, develop partnerships. So the sum total is bigger than the individual. Mustafi probably wasn’t the most sought after, high profile defender in the transfer window (Stones was?!). However, in terms of developing a good partnership with Kos, we seem to have a solid defensive pairing (not ignoring the work put in by… Read more »

Kewon was class, whatever happened to him?

It’s at times like this you start to see why Wenger is manager of Arsenal and the pundits aren’t.

I heard a pundit (can’t remember who now) the other day say, yeah they did the same thing last year to Man Utd and to Leicester but what happened?

I tell you what happened. We lost Coqzorla and had no back up. Otherwise we’d have probably won the league. Now we have back up…

That just sounds so sweet to the ears..

And Coq in the same time, don’t forget our heart of the midfield.

And you really think Xhaka, Ramsey and Elneny are decent back-up?

And Gibbs, Gabriel, Holding and Per are decent defensive back-ups? And Ospina?

You are right, we are looking good!!!

The Corporal isn’t back up. He is an army in his own right.

That’s because pundits have nothing interesting to say. If the past just constantly repeated itself like these idiots always seem to think, we’d all still be watching silent films and being ruled by William the Conqueror or something.

Weren’t Alexis and Francis out for a while at the same time?

Even though he is currently injured I’m sure our coq is very satisfied knowing that the squad is stronger and goes deeper than it has in a long time.

I’m not a big Giroud hater, but it’s amazing how good our forward line can look and click when we play with three speedy players and not a big strong (and slower) focal point. Long may this continue.

I expect giroud to have a big role this season, for now as long as alexis as stirekr works we will play like this, also I would like to see more of lucas I don’t want to become Carling cup and fa cup player only and he really should have got a chance last night as a sub after 60 min or the game against chelsea after 3-0

Everything working well now and we have the best squad we’ve had in years. However, as Wenger says, they’ve got to keep putting in the hard work, no complacency. Walcott’ been a revelation, I hope he keeps it up!

Some of the football last night was nothing short of beautiful. We did take the foot off the gas though – although it’s nice to complain after a 2-0 result! ? I’m quietly confident in this team, let’s keep the head down and work harder every week and we’ll all be laughing (At sp*rs) come May.

How the hell is Ramsey going to break into our first 11, never seen the squad so competitive for years! COYG

in arseblog we trust
Reply to  Stage door

I don t think a «first 11» exists anymore…more like 5 pairs and a goalie.
So who is Ramsey going to partner with?

Joes big guns
Reply to  in arseblog we trust

Xhaka seems a very nice partner for him. With ramseys engine he can provide defensive cover and create in offensive third in similar to cazorla but with more physical presence. Id like to see that happen… I love cazorla btw

The team looked really sharp and I think Iowbi had a bit of a tough time keeping up with the speed and passing of everyone else. I dont mean to sat that he wasn’t good, Im just saying everyone else was playing at a very very high level. He will get there too in half a season.

Wenger sitting at the top of the stairs, Mourinho and John Terry lying in a heap at the bottom. Wenger smirks and says: “You guys give up, or are ya thirsty for more”?

I wish we could have Fatgooner’s take on all this.

fats and his uncle Piers have nothing to moan about. Must be living quite miserable lives now.