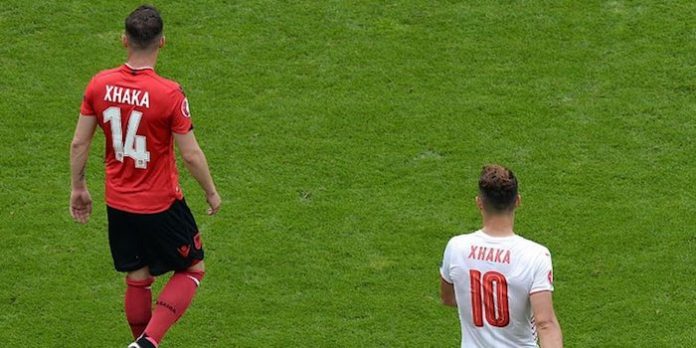 Granit Xhaka’s older brother, Taulant, says that the Arsenal midfielder is enjoying life at his new club, and with some patience will really grow to become a big part of Arsene Wenger’s plans.

The Xhaka brothers come face to face on Wednesday evening when FC Basel travel to London for a Champions League tie, and ahead of that the elder of the two has had his say about his brother’s start to life at the Gunners.

“He needs to be patient but he knows this and I am sure he can progress there,” he said. “Arsene Wenger is a coach who takes a lot of young players — he gives them confidence and also tries to help them as people.

“It was the same when he moved to Germany, he needed time but he learnt a lot. He changed, became more self-confident, more open to people. It was a good step to join Arsenal.

“Granit is very comfortable, very integrated. He is very happy there and he has already scored some super goals.”

Having played against each other for their respective countries at the European Championships this summer, Xhaka Sr reckons it’ll be a tasty encounter at the Emirates.

“To play against Arsenal is a childhood dream. It will be special. We both go into it with the same thoughts, that we need to win and give everything.

“We speak every day, but before a game sometimes not because we have to focus. We won’t tell each other how the teams play — we are professional.

“I hope that after the game we can meet quickly. I need to ask the coach, so hopefully we win and he’s in a good mood!”

Was half expecting his older brother to be called marble…

Xhaka! When the walls fell…

I hope more people get this than not.

Hello, from Canada and desperately trying buy tickets for my wife and I through ticket exchange after getting a red membership for the Middlesbrough match. Only been able to find single tickets. Was wondering what it is like during a match like this, as in would we be able to buy said tickets and perhaps move farther away from our seats to move to two vacant seats? Would appreciate any insight. Thanks. Sorry for distracting from the Xhakas.

Would love to help but unfortunately I don’t know Xhaka bout that stuff.

Afraid not fellow Gooner, we’re pretty militant with our seats.. You could try box office a couple hours before ko? Or even a tout.. but they are typically dire humans

Bromance in the truest meaning of the word.

Recalling how Xhaka completely bossed the game against France in the Euros. But Pogba for $90M….

I can’t imagine that level of sibling rivalry. If my brother beats me in FIFA it takes me days to recover.

Indeed. Imagine if one were to smash a siblings beloved mug. How long do you think that’ll take to recover?

I mean, they already clashed in the Euros Albania v Switzerland. Wenger and Dick LAw must have done a lot of ground work early on to bring in Granit start of transfer window. This is never mentioned by those who hysterically bleat on about late transfer signings. As I have explained before, there are reasons why the transfers tend to happen late. 1) sometimes it benefits us to wait out the market to see who may come down in price. Particularly when some of the bigger (debt financed) clubs have commited, we may find less competition for remaining players and… Read more »

Critecks maybe… I”ll walk myself out.

Out of curiosity – who are the seven sisters that can out pay us? RM, Barça, BM, Utd, City, Chelsea and .. Juve? Why is that when we are fifth size wise? Isn’t it actually the self deployed ‘sustainable business model’ and the managers (un)willingness to do business outside his comfort zone that makes us not able to compete, not our financial strength in itself. It’s by choice we don’t compete, nothing else. Whether one agrees with that our not is another question. But don’t pretend we aren’t a mighty power house in the world of football.

And the great thing about Granit is he appears as hard as Granite.

Lucas too looks like someone who will not be pushed around.

We need a bit of this fight now.

LOL at the Walrus

Apologies for the text speak and unrelated nature of this comment. But it really conveys my present sentiment.

Actually feel really sorry for him. Yes he was a massive twat to do it but it’s entrapment, no two ways about it. Whats he attempting to do that expensive accountants don’t? The people who set up that sting should be sent down. Yes he’s pissed us off over the years but he did some great work with Bolton, has always been fairly respectful to Arsene and he’s finally got the job of his dreams to have it taken away by some fuckers after a quick pay cheque for a story. Farce if you ask me. More on topic, Xhaka… Read more »

He will go down as a legend.

Seems like a really decent guy. And it reminds you how big our club is when players dream about just getting to play against us