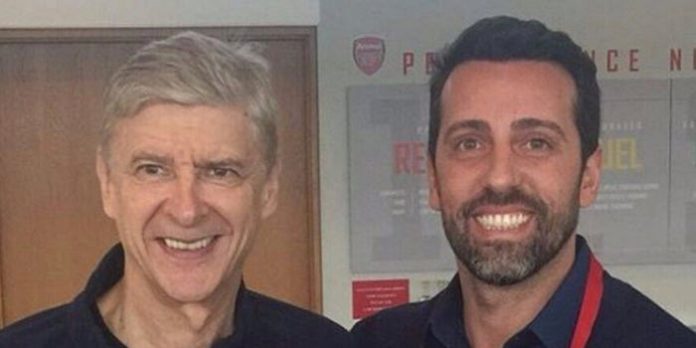 Former Arsenal midfielder Edu says that Arsene Wenger treated him like one of the family when he first arrived at the club.

The Brazilian went through a traumatic period at the time, losing his sister just before arriving, and there were issues with his passport that delayed the move.

All of which made his life difficult, but he says the way he was treated by the Arsenal manager helped him settle in and become a key part of title winning sides.

Speaking to ESPN, he said, “The beginning was difficult, it wasn’t easy to adapt. I went through a very difficult personal issue before I arrived in England. I lost my sister a week before I arrived.

“I received a lot of support from Arsene, the period of adaptation was not easy. The weather wasn’t easy either, because I arrived when it was winter in England and summer in Brazil.

“I learned a lot from Arsene Wenger and I carry with me what he taught me until today. He treated me like a son when I lost my sister, he was a guy that embraced not only me but my entire family.”

And he looks back fondly on his time in London, and the players he played alongside.

“The period at Arsenal when I had the opportunity to play alongside Bergkamp, Henry, Pires, Vieira, Ljungberg, Ashley Cole and Lehmann that was a huge team,” he said.

“Thierry Henry really impressed me, he was by far in the best period of his career and one of the best in the world.

“Bergkamp is elegance personified and he is a great person, playing alongside him was incredible.

“In his position Patrick Vieira was one of the best I’ve ever seen and that I have ever played with. He was a complete midfielder and a very nice guy too.”

Edu is now the director of selection for the Brazil national team, and his star as one of the game’s administrators there is rising.

Thanks to @Stillberto for the translation

Very fond of Edu especially when he won me £200 at 20 to 1 at Newcastle in the FA cup for scoring first. Got smashed in the bigg market singing his name.

Also, a little aside. How much control does blogs have over advertising that pops up? Often I’ll be innocently enjoying a quality article and then find myself looking at Christiano Ronaldos abs. To put it very mildly, I don’t like it. Indeed it makes me want to stick burning pokers in my eyes. Can anything be done to rectify this?

I can try and block it. It’s not good for the eyes, I’ll admit

Those braces worked a treat! 😀

Seriously, my favourite Arsenal player, summed up the ‘Arsenal way’. Lord of the triangles. And not to get too up ourselves but he would have been lost on other teams in England, especially then.

Also am i the only one who watched that fly on the wall series following him and Robbie Savage? Was seriously good.

And yet despite all what Wenger did for him, he opted to leave on free transfer at his peak when the team and the club needed him the most.

In his defence he was never 100% first choice and if I remember correctly (open to correction here) the club didn’t offer him wages on the higher end of the team’s structure. I understand some ill will even if I don’t share it but he is no Nasri.

He was first choice, ahead of Gilberto, including for much of the invincible season until he got injured.

I remember Edu reasonably fondly, but you are right. He saw the dollar signs, fucked off and frankly, never did as well anywhere else. For hector, this bloke is a warning from history. And, there are many more, too numerous to mention. He should ignore DNA references, stick with us and become a fucking legend.

He went to Valencia – it was hardly like going to a Man City or a Chelsea.

I guess Wenger has been a Godfather to many young players, who when they grew in stature turned their backs on him.

Working out a contract is professional and ethical.

I spotted him once in Barnet, he was driving a silver BMW X5 with the number plate X5 EDU. He did a 3 point turn in front of me and he waved to say thanks. I was really star struck at the time. No the same as when John Jensen was behind me in the queue in MacDonalds.

Edu had a funny old career by the sounds of it (I was too young to remember in his arsenal peak) but Wikipedia says he was an instrumental part of the invincible side before flopping and having his contract cancelled at an average Valencia side and then the same at Corinthians, then retiring having only played 180 professional games. An enigma.

His career was ruined by injuries. Serious footballer when fit

He did his cruciate ligament about a month after signing for Valencia, then recovered and did it again about 3 months later. Corinthians was a bit of a sentimental homecoming, but his knees were pretty fucked by then. They gave him a Director of Football job and he was really good at it, so now he does a similar job for the national team. He’s very highly rated in that regard. He’s the youngest person to hold that position by some distance I think.

I remember him being an elegant player in a team full of amazing players. We had a winning team playing amazing football when he played. I think any player’s standard would have been raised in that environment, hell even I would have looked good in those teams.

You never said in the article if he found his sister after?

what an idjit, what some people do to get downvotes and seem popular is sickening. blogs can’t you delete some posts/comments

Sometimes it’s good to let people view others for their stupidity.

I understand the Mel Brooks reference (if that is what you were going for), but that’s the kind of black comedy usually reserved for the family of the person who has passed on.

What a classy response to the comment above: no animosity or name-calling, just a polite objection.

Well done to you, Sir.

billybobjojo – get out of here u troll

I met Edu once in a hotel in Paris. He was there with his girlfriend. Went to shake his hand and he started to chat. What a really nice man. I am not surprised he is a success in the management side of the game. Only regret was that due to injuries we missed a lot of his career. On his day he looked very comfortable in that amazing team.

The guy wasva fucking beast when fit. He was also immense in the run-in to the 2002 title campaign. and he capped it up with a gritty performance at the old toilet. what not to love about this guy

Always seemed like a nice bloke, Edu. Was a classy player, too.

One of my favourite and most unsung players of the Wenger era. Technically superb, strong tackler, a very very quick and tidy passer, he was like a human metronome.

I was gutted when he left but slightly understood as he was never really a guaranteed starter.

A close bereavement and career ending injury in your mid-20s for pro baller is shockingly unfortunate but it’s great to see he’s rebuilt himself as a highly respected figure in national football.

Arsenal under Arsene Wenger is more like a 20-year life coaching seminar. Bloody love the man. My dad was ace but he’s a great surrogate.

Everyone..i think..was sad o see Edu leave. He didn.t run down his contract,he waited after many injuries and we waited for him to get fit. By the time he did it was too late and Valencia had offered him the contractual security he needed. Given how it turned out it was probablh the correct call from Arsenal..sentiment aside

Did you know Edu was the first Brazilian to win the Premier League?