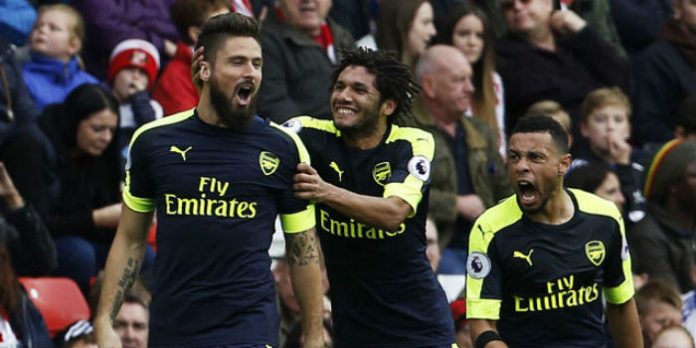 Francis Coquelin has hailed Olivier Giroud’s mental strength after his compatriot made a triumphant return to first team action by scoring twice with his first two touches against Sunderland.

The France striker has endured a stop-start season since his late return to London following EURO 2016 with the form of his teammates, suspension and a toe injury contributing to time on the sidelines.

In Giroud’s absence, questions have been raised about his long-term future at the club, especially with teammates Theo Walcott and Alexis Sanchez showing good form as part of a new-look attack.

Reflecting on the situation, Coquelin told Arsenal Player that his compatriot’s return is great news for the Gunners.

“Oli is a strong character – every time people from outside doubt him, he always responds in a good way,” he said.

“I am really pleased for him. He has been working really hard to get back to full fitness and it was a massive goal today to get it back to 2-1, at a very important time.

“It is a really strong addition to the squad [to have him back] and hopefully there are many more goals to come from him.”

Giroud wasn’t the only returning party to earn praise from Coquelin. “This year we have got strong character, we have shown that in the past,” he added.

“I want to praise the players who came on because every time they come on they do the job.

“Olivier got a brace, Aaron also came on and was great as well, and the young lad Ainsley Maitland-Niles was really good. Everyone is fighting and it was a massive win.

“The character we are showing at the moment is great, plus the fans – home and away – have been great, so that is an extra boost for us as well.”

Maitland-Niles: I’m not a defender, but I’m trying my best

… screamed Coquelin, jumping into the air before excitedly tugging at the shirts of passers by.

Man love that Coq! He epitomizes the team spirit we speak of!

I love that he speaks like such a senior in the team after only a relatively short time in the first team. Also, while I’m not of the thinking that performance is 99% effort and passion, it’s fun to watch him celebrate goals/results.

Now that is what you need from team mates to help boost your confidence and aid team moral! Coquelin for Prime Minister or President. COYG!!!

The way he celebrates every goal. I can’t imagine how he will celebrate his!

The way Coq celebrates, he’s so passsionate. If we win the league I think he’ll turn into the Incredible Hulkand then explode!

There is no cheap science fiction ‘Plan B’. This is where amateur thinking comes in. All options are open. We struggled to score against Boro with Alexis up ffront. Giroud bangs in two goals when we struggled agains lowly Sunderland. Yet some still insist that Alexis MUST start and Giroud is only a second option. This fits into their narrative that Giroud is not good enough. Just like it fits into narrative that say perrenial scapegoat Flamini was poor for us when he held together with Ramsey over critical period shorn of our top assets through Dec and Jan last… Read more »

and lucas & welbz to return. as you say options.

Worth noting the players that have improved would all not have gottent heir chance had some of the people on these boards with “Plan B’ ideas been in charge. Wenger gets paid big money because he knows when to put someone into the team. Bellerin, Iwobi, Coquelin none were being clamoured for by the same people here who can only think Giroud as a ‘Plan B’. There are no “Plan B’s, all options are open and dictated by what we need. GIbbs, Walcott, the Ox have all improved because Wenger put them into the squad despite some feeling they are… Read more »

Well said Santori agree with both your comments.

i’m sorry but who are the idiots who questioned Giroud’s time at Arsenal just becoz alexis and theo were doing good?

Ever heard of squad depth? FFS.

They’re the same idiots who think we should sell Ramsey, Walcott, and Wilshere.

Why is he not our captain?
Let us have Captain Coq!